We need a wider, more nuanced view of Métis diversity

A group of scholars offer a rebuttal to a recent article exploring the notions of “self-Indigenization” and “race-shifting.”

The article, “Researchers examine the growing phenomenon of ‘self-Indigenization’” (University Affairs, April 7), defines self-Indigenization as a “decision to suddenly identify as Indigenous without official recognition along tenuous links.” Reviewing the work of sociologists Darryl Leroux and Chris Andersen, the article connects this concept of self-Indigenization with accusations of “race-shifting.”

Though this notion of “self-Indigenization” and “race-shifting” certainly is evocative, it is problematic and does not take into account Métis diversity and the cultural renaissance underway in Canada. The work of Maximilian C. Forte (Who is an Indian? Race, Place, and the Politics of Indigeneity in the Americas, University of Toronto Press, 2013) shows that the resurgence of Indigenous identities is a phenomenon that can be observed in every country built upon a colonial legacy. Indigenous resurgence is typically marked by growing numbers of people who self-identify as such. This phenomenon can easily be denigrated by selective genealogy to discredit communities and individuals as being “merely” Acadian and/or French-Canadian opportunists exploiting what is only a drop of pure “Indian blood.”

To suggest that identity, Métis or non-status First Nation, is merely a matter of blood quantum evokes the worst racial and essentialist rhetoric of the 19th century. Understanding the multiple layers of this cultural resurgence and transmission of identities requires in-depth local analysis. To paraphrase the late American anthropologist Clifford Geertz, we must study in villages, fishing boats and traplines to understand how Métis resurgence can be understood as part of a larger global process.

This enterprise must first take into account that Métis peoples emerged as a diaspora across the multiple inland and Maritime fur trade routes where predominantly French-Canadian and Scot voyageurs toiled for fur trade companies and occasionally became “freemen,” living with their Indigenous spouses. Métis culture(s), much like the French-Canadian diaspora from which it sprung, emerged without a single geographical point of ethnogenesis. This is highlighted by scholars such as Gerhard Ens and Joe Sawchuk (From New Peoples to New Nations, U of T Press, 2015), who identified multiple continental locales of Métis ethnogenesis.

Individuals, families and communities can shift, transform, evolve and re-emerge as they contend with the ever-present consequences of colonialism and struggles to survive in a social context increasingly hostile to expressions of Indigenous cultures. Some of the Métis of Montana, fearing deportation, identified as French-Canadians to avoid being forced from their homes, while others did successfully manage to be accepted into Indigenous communities and enrolled in reservations (Martha Harroun Foster, We Know Who We Are, University of Oklahoma Press, 2016). Historical cases such as that of the Western Métis Johnny Grant also testify to the malleability of self-identification as he identified as White, Métis and even First Nation.

That said, we agree that attempts to falsely represent oneself with the intent to commit frauds should be condemned. But, in doing this we, must be careful not to conflate the issue of ethnicity and the problematic behaviours of some individuals, Métis or not. 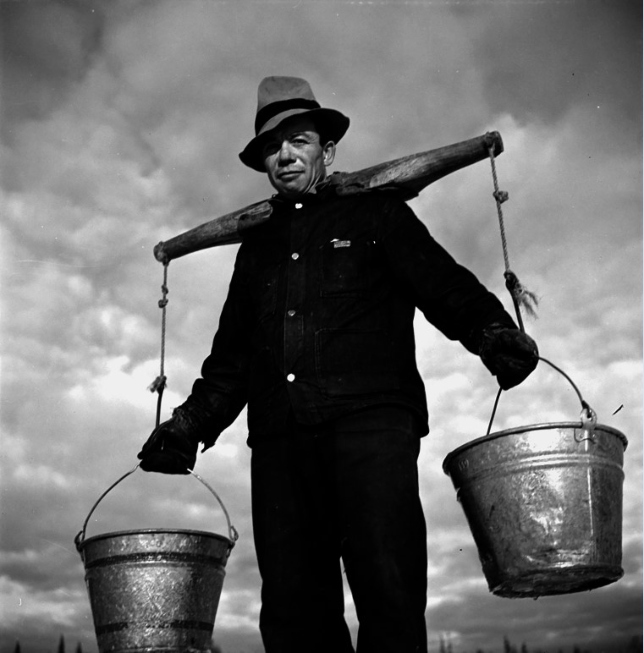 Portrait of a water carrier and “chore man” Andrew Budge, carrying buckets of water hung on a yoke about his shoulders at the M. Kearney logging camp. The Budge family remains in the Maniwaki region.

We find the same preoccupation for the protection of Métis diversity expressed by the Supreme Court in its Daniels decision in 2016, a concern best summarized within the intervention submitted by Métis Settlements General Council, which resisted “any notion there is a single collective voice speaking on behalf of the Métis in Canada.” The same reductionist rhetoric inherent in the concept of “race-shifting” was used by the Crown to try to negate the rights of the Métis people of Sault-Ste-Marie during the Powley trial, namely the too-distant ancestors, the “thin Indian blood” and the fact that the Powleys were not Red River Métis, descendants of buffalo hunters. The Supreme Court of Canada wisely rejected such arguments.

All this to say that powerful actors are involved when it comes to the recognition of Métis peoples in Canada. This includes governmental authorities, Métis organizations, activists and academics who negate the very possibility of Métis diversity in communities throughout the Eastern provinces of Canada. In facing such pressure, other scholars have chosen the route of reviewing archival evidence, collecting oral tradition, building comparative analysis and conducting robust ethnographic work to better understand this Métis heterogeneity across the country. They include John C. Kennedy, Denis Gagnon, Bonita Lawrence, Annette Chrétien, Stephen Augustine, Victor Lytwyn and David McNab.

The Métis of Western Quebec and the Ottawa Valley

Our own work highlights the descendants of the Outaouais Métis. These include those who actively lobbied to have the Métis included in the 1982 Constitution Act, side by side with Western Métis. Our recent publication on the Outaouais region in Western Quebec and the Ottawa Valley, Les Bois-Brûlés de l’Outaouais. Une étude ethnoculturelle des Métis de la Gatineau, published by the Presses de l’Université Laval in 2019, and its English version, Bois-Brûlés: The Untold Story of the Métis of Western Québec, now available by UBC Press, involved a detailed analysis of archival documents and historical sources. Through this research we are able to produce detailed accounts spanning close to two centuries highlighting how “freemen” and Indigenous women in the fur trade formed families and how their Métis descendants played a pivotal role in this history.

These descendants were identified as Bois-Brûlés, Métis and “half-breeds” by priests, bureaucrats and Anishnabe. The latter petitioned the Department of Indian Affairs in 1874 to complain about their actions. References to the descendants of this original community as being Métis continue well into the 20th century. In the 1960s, descendants of these Métis in Western Quebec became much more politically active and organized in seeking to have their rights recognized.

Similarly, our ongoing research in the Mattawa/Temiscamingue area of the upper Ottawa Valley further supports the findings of the Metis Nation of Ontario, the Province of Ontario and Canada of how these historic Métis emerged as part of a regional and fluid network of Métis within the Outaouais region of Eastern Ontario and Western Quebec.

Our genealogical research confirms that Eastern Métis of the Outaouais region are directly connected to Eastern and Western historical Métis families. These include the Paul, the McPherson, the David and the Taylor families. It is misleading to suggest that these families have no Indigenous heritage or culture, and to somehow believe that a descendant of one historical ancestor is legitimately Métis if their family was in the Red River or the North-West territories, yet “race-shifters” if one branch of the family settled elsewhere.

Being Métis must not rely on tautological definitions whereby only “Western Métis” are Métis because of the historical fiction that Métis only existed in the West. Rather, it is crucial to be open to the possibility of Métis diversity and to define Métis conceptually with clear criteria to determine if a community is truly Métis regardless of geographical location. The importance of this work requires a move away from exclusionary language and politics, and a return to respectful and mindful examinations of the evidence to understand the various contours of Métis diversity in Canada.