Orientation week assaults persist because they are normalized as part of university culture.

Fear and frustration hang over London, Ont., where many people are discussing four formal allegations of sexual violence reported to Western University and sharing unconfirmed rumours about wider sexual assaults. Members of the Western community say they feel unsafe, especially young women and other vulnerable groups.

In response to the situation, students organized a walkout rally on Sept. 17 to stand with survivors and demand change.

Alan Shepard, the university’s president, has said Western let its students and their families down, stating: “What happened last week is really unacceptable … We clearly have a culture problem that we need to address.”

Among the new measures the university will adopt is the launching of a task force to address sexual and gender-based violence, providing mandatory training about sexual violence, consent and personal safety for all students in residence and hiring 100 new “safety ambassadors.”

Responding to this stressful situation has been complicated by COVID-19 restrictions and protocols. However, these assault allegations cannot be explained away in light of the pandemic, nor are they unique to one institution. 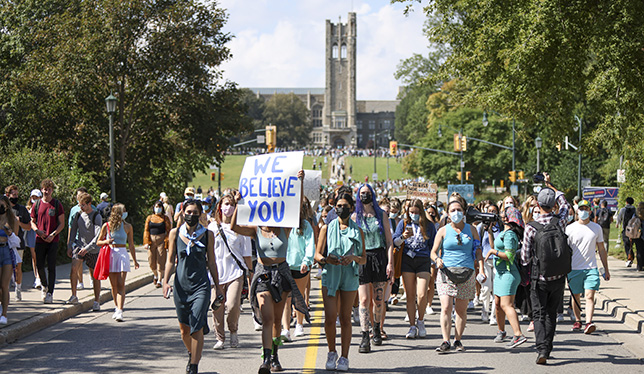 Western University students march during a walkout in support of sexual assault survivors, in London, Ont., on Sept. 17, 2021. Photo courtesy of The Canadian Press/Nicole Osborne.

Sexual attacks occur as regularly as the changing seasons at universities and colleges across the country. Frosh, or orientation week, in early September is when sexual and gender-based violence are especially rampant. Despite decades of research that demonstrate the links between these activities and incidents of sexual and gender-based violence, they are still held every year.

It’s a chilling reflection of how our society normalizes this kind of violence, which has become part of the unofficial campus curriculum.

Highly sexualized depictions of campus party life that validate rape culture have been immortalized in popular culture for decades, including in the iconic Animal House (1978). One scene depicts an inebriated male young man glancing at an incapacitated and inebriated young woman — while a comedic devil on his shoulder uses graphic terminology to urge him have sex with her and adds: “You know she wants it.”

Although dated, this film has shaped popular ideas that associate sexual conquest and predatory behaviour with young men’s rites of passage on college campuses.

Student-led activism and ongoing feminist challenges to this aspect of campus culture have led to changes in the tenor of frosh activities, many of which include presentations about sexual consent and mental health. However, reports of sexual assault, rape and gender-based violence continue to happen during frosh week.

Two years ago, as a medical anthropologist with expertise in human sexuality, I conducted a qualitative research study about Western University’s sexual culture and the institution’s response to incidents of sexual violence. I interviewed 23 students and seven administrative staff. Participants described the project as “timely” given that two assaults were rumoured to have occurred during the first week of classes that year.

“I heard about it happening to first year students, I believe, so that was just crazy. You literally just came to school, your parents just let you go and for you to get sexually harassed is really sad.”

Participants also indicated that despite the pervasive violence on campus, little seems to have changed to prevent it. The university’s policy on gender and sexual-based violence has been reformulated several times over the past few years, most recently in 2020. The policy is expansive, inclusive and seeks to address cultural issues as well as everyday social experiences to curb the violence within our campus. And yet the incidents continue.

Indeed, survey data from a year prior to my study by the Council of Ontario Universities indicate that a staggering 71 per cent of Western University students reported being sexually harassed. Among those who reported being assaulted at all 20 universities included in the survey, 18 per cent of events occurred in the fall semester just before classes started. Students who indicated they had one or more experiences of sexual assault were also asked to describe the perpetrator(s). For this question, the most common category selected by survey respondents was “another student” (49.5 per cent).

These grim numbers resonate with what the participants said about Western’s orientation week, which is popularly known as OWeek.

‘I don’t think they see … it happening’

As one male student participant in my research said:

“Literally all the guys in my res (residence) were like ‘let’s see how many bitches we can fuck within the first week,’ like within Oweek, which is disturbing.”

Equally troubling are the predatory behaviours of men who troll young women during orientation week events and yell at them from their vehicles, which has occurred over the past few years. Several students discussed this, including this young man:

“During last Oweek I was a soph (orientation leader) and there were guys in cars coming to first year events, stopping next to them, revving their engine and asking, ‘Who wants to go for a ride?’”

The newness of the first week of university for students, who are unfamiliar with campus life and the orientation leaders assigned to them, was raised by many participants as a precipitating factor in making orientation week unsafe, including this woman:

“I don’t think they realize, the people who run Oweek, the staff, the sophs. I don’t think they see any of it happening and the sophs have only just met their froshs … I think people do become comfortable with their sophs, but I don’t know if in that time frame someone is going to feel comfortable enough to reach out and say, ‘This is what happened.’”

Orientation week assaults persist because they are normalized as part of university culture and because sexual and gender-based violence continues to occur within society at large.

They also persist because many institutions are slow to make the structural changes required to address the toxic issues that make campuses unsafe. No school wants to be associated with rape or violence. But until postsecondary institutions acknowledge and respond to the undisputed fact that assaults occur regularly on their campuses students will continue to suffer, and so too will institutions’ reputations.

How could universities and colleges improve campus safety?

Treena Orchard is an associate professor in the school of health studies at Western University. This article is republished from The Conversation under a Creative Commons license. Read the original article.