Where are all the international students universities were promised when Trump was elected?

Despite a widespread media narrative claiming students would be flocking to Canada, universities did not see a “Trump bump.”

Remember when hardly a week went by without headlines in the media proclaiming a “Trump bump” was driving droves of international students to swarm university campuses in Canada? That was the seemingly distant 2017, when a welcoming and gentle Canada was opening its arms to the world’s brightest, as the Trump administration instituted travel bans, set out to build walls, and stoked the flames of xenophobia.

Although we did not have the official numbers – courtesy of our morose national effort at collecting and disseminating postsecondary education statistics – journalists, university associations, and admission officers were ready to stoke the fire on this narrative. “Trump is turning Canada into a haven for the world’s best and brightest,” proudly shouted out Maclean’s magazine. “Applications from international students were up by double digits this year, with record levels of interest from American students,” reported the Globe & Mail. TVO ran a 40-minute The Agenda debate on how Ontario universities benefited from the “Trump bump.”

The narrative was not lost on international observers, and certainly no greater satisfaction was enjoyed domestically than from the recognition of Canadian virtue and triumph by American news media, with coverage of the “Trump bump” from the New York Times to Vice indulging the national character.

Invited to speak at an international education seminar during that summer at Boston College, I discussed my skepticism about this narrative based on my research on international student mobility, to my audience’s surprise. Basically, it is too simple and too fast. There are usually multiple factors at play influencing the choices of international students, and long-term considerations are as relevant as short-term events. This is, of course, the antithesis of media-friendly sound bites – such as, say, the “Trump bump.”

It turns out that there was no “Trump bump” after all.

The most recent international student enrolment figures released by Statistics Canada show two things. First, the unfolding of a long-term pattern: international student enrolment has been growing relatively steadily since the late 1990s in Canadian universities, approaching 200,000 students in 2017. Second, the nine percent annual growth in 2017 is rather ordinary; it is the actual average rate of growth since 2000. 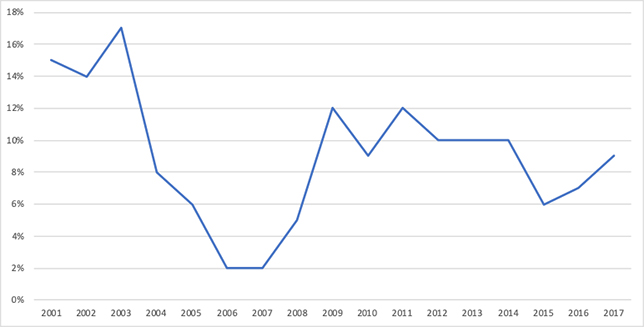 The annual growth in international student enrolment in universities. Data from Statistics Canada.

Had there been a “bump” of any kind since Trump’s election, we would expect to see an increase in enrolment that goes above and beyond the usual growth that we have experienced for two decades, not simply any growth. Because for many other reasons, our campuses have been welcoming more international students in greater number for many years. Instead, the 2017 growth rate is lower than those of most years during President Obama’s administration, for example.

It is quite possible that the picture has changed in the intervening years. But again, we will not know for sure until Statistics Canada releases updated figures in another year or two. And in the absence of data, stories like the “Trump bump” can easily take on a life of their own, built on facile narratives that many people are eager to believe in.

Creso Sá is the chair of the department of leadership, higher, and adult education as well as a distinguished professor of science policy, higher education, and innovation at the University of Toronto. He is also the editor of the Canadian Journal of Higher Education.
COMMENTS
University Affairs moderates all comments according to the following guidelines. If approved, comments generally appear within one business day. We may republish particularly insightful remarks in our print edition or elsewhere.