Can ‘ultimate mastery’ act as a framework toward achieving a flow state?

The idea of successive iterations across stages of development is not incongruent with the concept of mastery, and one might expect that further iterations drives greater competence.

“You have to be able to accept failure to get better.”

A close friend, Howard Bornstein, recently penned an article on Medium describing “ultimate mastery” as a framework toward achieving flow. It’s worth reading his post which triggered a question of whether an iterative model of Miller’s pyramid of assessment, which is related to Noel Burch’s four stages of competence, might be more representative of the process of innovation in practice, rather than the concept of “ultimate mastery.”

A flow state is the mental state in which a person performing some activity is fully immersed in a feeling of energized focus, enjoyment in the process, and complete absorption in an activity resulting in the transformation of one’s sense of time. 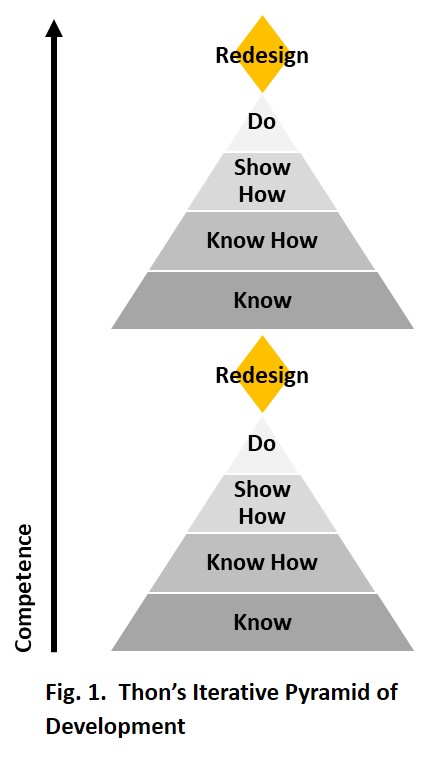 The examples of flow state that are often romanticized in movie montages tend to be at the redesign stage. While these stylized moments of brilliance capture the most attention, the exercise in entrepreneurship that follows is the subsequent learning of the implications of the redesign, and understanding of their cause of effect, which is necessary to apply the innovation most efficiently. The teaching that exists between ‘Knowing How’ a system works and its application is how teams are built and companies scale. Flow states are represented by and can happen as bursts within any layer of this model. To borrow Mr. Bornstein’s analogy, Michael Jordan making his 3 pointer is a flow state example at the ‘Does’ level, a professor engrossed in their lecture is a flow state example at the ‘Shows How’ level, and how time vanishes while reading a book are flow state examples at the ‘Knows How’ or ‘Knows’ stages, depending on the content of the material.

Ironically, fully understanding a system and then teaching it to others is also what drives competition, which subsequently sparks further innovation and improvement through redesign to stay ahead.

My point is, this system does not lend itself well to a concept of “ultimate mastery” because for every Michael Jordan, there is a LeBron James who succeeds them, not necessarily because they are a better athlete per se, but because the game has evolved and so has the play style.

This idea of successive iterations across stages of development is not incongruent with the concept of mastery, and one might expect that further iterations drives greater competence. To revisit Mr. Bornstein’s analogy – NBA players begin their careers on the playground, then iterate on their skillset through high school, college, professional leagues, or Olympic competitions, each with their own rules, competitors, and challenges requiring redesign of their athleticism and play style. The rules of academia or entrepreneurship are no different in framework and this model applies equally well there. As to whether “ultimate mastery” can exist? I propose that the journey is more important than the destination.