How our current approach to science pushes people away

The current system of academic science is not organized to support all scientists equally.

“I’d found out that if you pushed people away hard enough, they tended to go.”

Despite efforts to promote under-represented demographics within academic science, stark opportunity and outcome disparities persist. The causes are systemic and supported by ample evidence, and it’s important that we reflect on their repercussions.

Humans self-identify into thousands of overlapping ethnicities, multiple genders, and various socio-economic classes; the fluid boundaries between categories are not always possible to define, can change based on perspective, context, and over time, and are sometimes arbitrary. The idea that any subset of researchers has more to offer the scientific community than others ignores nearly 5,000 years of documented history showcasing scientific breakthroughs arising from diverse people from every major region of the world. Preventing certain scientists from participating on an equal footing with their peers by denying them equal access to career advancement opportunities, resources, and platforms robs us of the collective ingenuity that our diversity offers.

Before our systems of scientific training can be reformed, we must acknowledge that the status quo allows implicit and institutional bias to affect career advancement. 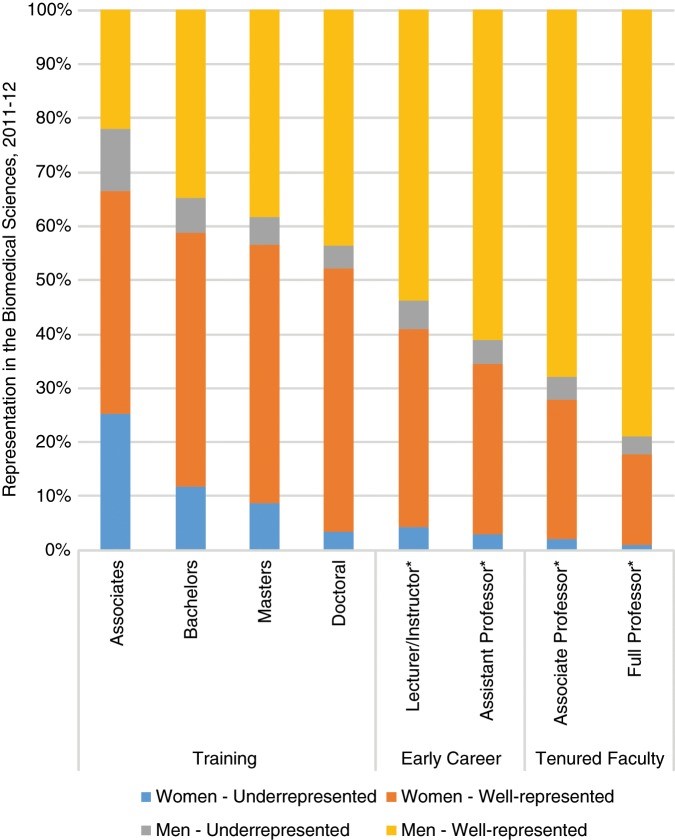 Men and women are described differently in academic letters of recommendation. Figure adapted from Trix and Psenka, 2003; Schmader et al, 2007; while it is important to be conscious of language choice, a fully blinded process such as that described in Goldin et al., 2000 would go further still to avoid implicit gender bias in peer review.

2019 UNESCO Institute for Statistics data showed that while women comprise 50 percent of the human population they account for fewer than 30 percent of the world’s researchers.

A 2014 survey by the Medical Schools Council in the U.K. found that while 44.5 percent of U.K. academics in 2013 were women, only 20 percent of professors were women.

A 2019 study by Hoppe et al. examining the individual stages of the R01 grant application process found that applicant race accounted for disparate outcomes. Notably, African-American/Black applicants tended to propose research on topics with lower award rates. These topics included research at the community and population level, as opposed to more fundamental and mechanistic investigations, which tended to have higher award rates. Topic choice alone accounted for over 20 percent of the funding gap after controlling for multiple variables, including the applicant’s prior achievements – illustrating how implicit biases can impoverish science by decreasing the diversity of topics and approaches.

The current system of academic science is not organized to support all scientists equally, in ways that push many young scientists away and rob us of their talents, innovations, and accomplishments. It is important that we recognize this reality and assume responsibility. While many of the systemic societal issues that contribute to this bias are not under our direct control, we must assume responsibility for those that are, such as  recruitment and hiring, administration of grants, review and publication of great research, and promotion of scientific talent.

Medical School Council (2014). A Survey of Staffing Levels of Medical Clinic Academics in UK Medical Schools as at 31 July 2012.

In my next column we’ll think through some examples of how we can identify implicit bias in scientific training, and practices we can implement to correct their effect.

If you are curious about your own implicit biases, Harvard has created an Implicit Association Test that is fun and illuminating to take.