Too much Talent? SSHRC’s “solution” to the postdoc boom

Today, we are very pleased to have a guest blog post from the Humanities and only a touch of familial guilt was used in its procurement. Dr. Eddy Kent, an assistant professor in the University of Alberta’s English and Film Studies department, puts in his two cents on SSHRC’s announcement earlier this month about its postdoctoral fellowships….

The Black Hole, says the masthead, is devoted to “issues of interest to early-career scientists in Canada.” Hopefully, you’ll put up with a contribution from someone who teaches English Literature about changes afoot at the Social Science and Humanities Research Council (SSHRC). Since they form part of a larger set of changes coordinated across the TriCouncils, the recently announced revisions to SSHRC’s postdoctoral fellowship program are significant to early-career scholars across the academy.

In July 2012, SSHRC announced the renewal of the Talent program. For those unfamiliar with SSHRC lingo, Talent is responsible for funding students and postdoctoral fellows. They set out a three-year timetable, including specific plans for postdocs. In July 2013, right on schedule, they announced the following changes for the 2014-15 competition year.

It is the first two points that warrant serious attention, since they signal the declining status of the postdoctoral fellow in Canada’s academic research culture.

The increase in the value of the PDF looks positive. However, since the research allowance was worth $5,000, it is revenue neutral. When I held my SSHRC award in 2008-09, for example, I received $38,000/yr plus the research allowance, for a total value of $81,000. Next year’s winners will receive $40,500 for two years and no research allowance, for a total value of $81,000. This shell game provides no net benefit to an award holder. Factor for inflation—the Bank of Canada’s handy CPI calculator reports a 6.6% increase from 2008 to 2013—and you can see a substantial erosion of a SSHRC PDF. The poor situation is magnified further when you consider the current tax status of a fellowship (taxable income) compared to a research allowance which can be partially deducted against research expenses.

This may surprise readers of this blog, who are likely more familiar with the CIHR and NSERC components of the Tri-Councils, but until now SSHRC accepted applications from candidates for up to three years post-PhD. That has now been reduced to two with a maximum limit of three lifetime applications per candidate. This probably sounds like a good deal for those readers wrestling with NSERC’s rule that allows you to apply only once – ever. Still, the basic principle holds: the Tri-Councils are reducing the number of candidates in any given year.

What benefit this might be to individuals is unclear. Some of my colleagues have suggested it would level the playing field, where currently the freshly-minted PhD competes with someone three years out. I haven’t seen any data to confirm or disprove this, but there are structural reasons that suggest such worries are overblown. Unlike the sciences, postdocs in the humanities and social sciences are not common; if you don’t hold a SSHRC, then you’re most likely working as a contract or adjunct lecturer. So the very fact that someone is applying for a SSHRC postdoc two or three years out means they are presently unlikely to be in a position that allows them to accelerate their research projects. A 3/3 or 4/4 teaching load is not especially conducive to one’s research.

If it doesn’t help individuals, the question cui bono? must be asked. In this vein, some have suggested, cynically, that the change is really an effort to massage the all-important success rates. Ian Milligan, a historian at the University of Waterloo, has studied data from SSHRC and assembled a revealing graph. 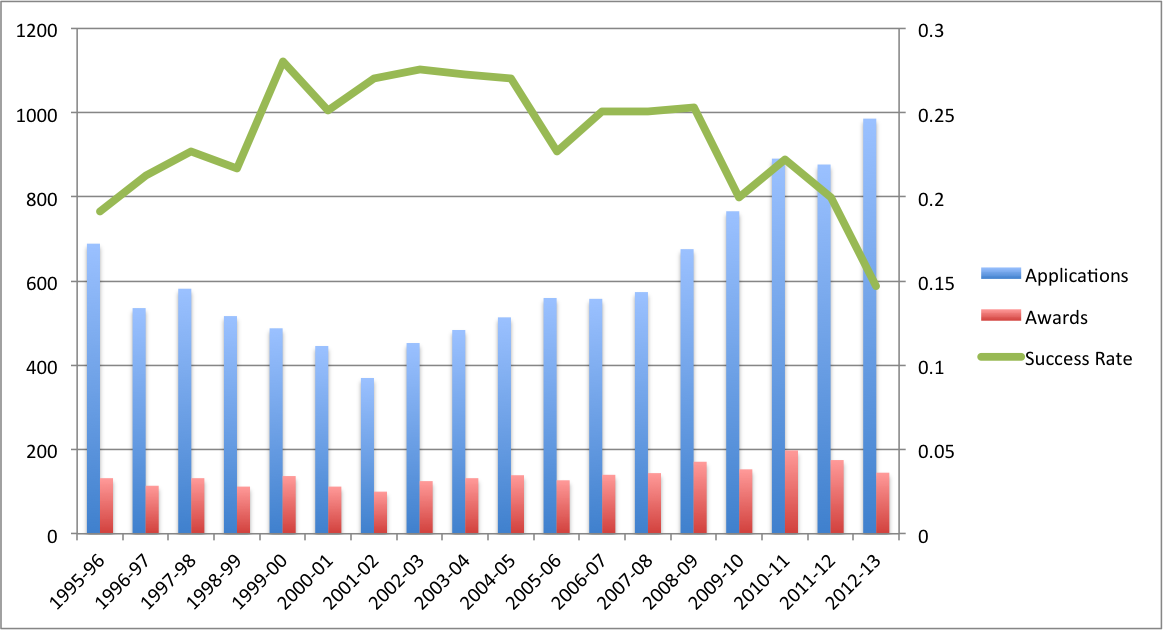 A steady increase since 2001 in the number of applications coupled with a relatively flat number of awards has led to a plummeting success rate. The simple solution — the one Milligan characterizes as “hamhanded” — is to reduce the denominator in this ratio.

I really hope that this is not the case, since that represents hundreds of real individuals. Putting aside the humanitarian concerns for a moment, it’s important to acknowledge this change makes little economic sense for Canadian society, given that the vast majority of these applicants are PhDs from publicly-funded Canadian universities and a smaller majority will have also received doctoral funding from SSHRC. The increasing applicant pool is a consequence of the major (and laudable!) Canada-wide investment in graduate training over the last 15 years. Every unsuccessful applicant therefore represents a lost investment. This is why success ratios are so important to SSHRC, which needs to justify itself to senior federal bureaucrats and politicians whose vocabulary is increasingly that of investment and tax dollars.

If the proposed revisions to the program succeed, then we might expect the number of applications next year to drop by a third to around 650. Assuming a similar number of PDFs are awarded, the 2013 success rate could thus rise to 23%, back in line with the ratios for 2000-2009.

But what’s good for SSHRC’s advocates to the federal government does not serve the interests of would-be postdoctoral fellows. These revisions mean that less money will be made available to fewer people overall. Dispiriting stuff, and hard to reconcile with Talent’s stated goal “to develop the next generation of researchers and leaders across society, both within academia and across the public, private and not-for-profit sectors.”

I’m sympathetic to SSHRC’s predicament. It works within budgets allocated to them by the federal government. Stephen Harper’s Conservatives have pled austerity and refused to invest significantly in postsecondary research. The Canadian Association of University Teachers reports that “between 2007–2008 and 2011–2012, funding for SSHRC will have declined by over 10 per cent in real terms. NSERC’s funding is down a more modest 1.2 per cent, while core support for CIHR will have declined by 4.1 per cent.”

So, barring a major change in federal policy, what is to be done? There is of course another and, I would argue, more equitable way to bump the success ratio back toward 20%: change the numerator, the number of awards granted.

Let me suggest how this might work. SSHRC’s 2011-12 budget for grants and scholarships was $332.3 million. The precise numbers for the PDF program are not readily available but a rough guess (150 awards * $81k) would put it at around $12 million. It might be less than that, since not everyone holds the PDF for the full two years, but let’s not quibble. Twelve million is less than 4% of the larger budget. To increase the number of awards by 50% (75 new awards) you’re looking at an extra $6-7 million dollars (or 2% of the overall grants and scholarship budget).

Redirecting that 2% away from other programs (Insight Grants, doctoral or masters fellowships, etc.) would be difficult. It also wouldn’t address the eroding value of a SSHRC PDF due to inflationary pressures. But it has to be fairer than doing nothing. The public has spent significantly to train more researchers, but it now appears that having invested so much in these highly-trained, highly-qualified, and dare I say Talented people we are refusing to support them at this most critical juncture. SSHRC must act more responsibly, supporting more from this vulnerable group at the most vital transitional stage of their research careers.

Dr. David Kent is a principal investigator at the York Biomedical Research Institute at the University of York, York, UK. He trained at Western University and the University of British Columbia before spending 10 years at the University of Cambridge, UK where he ran his research group until 2019. His laboratory's research focuses on the fundamental biology of blood stem cells and how changes in their regulation lead to cancers. David has a long history of public engagement and outreach including the creation of The Black Hole in 2009.
COMMENTS
University Affairs moderates all comments according to the following guidelines. If approved, comments generally appear within one business day. We may republish particularly insightful remarks in our print edition or elsewhere.