Scientists should speak up 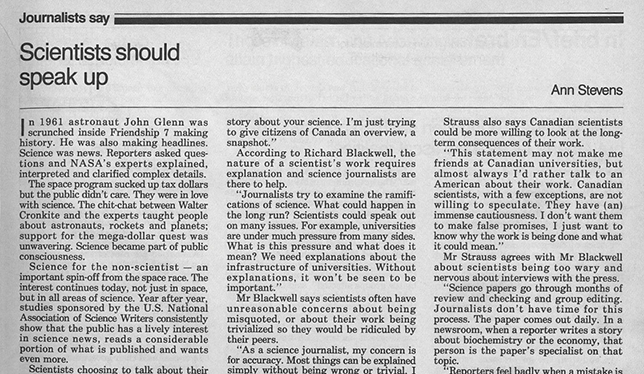 By Ann Stevens, assistant director of public relations at Queen’s University. She has based this article on a longer one written for the Queen’s Gazette.
Published March 1987

The space program sucked up tax dollars but the public didn’t care. They were in love with science. The chit-chat between Walter Cronkite and the experts taught people about astronauts, rockets and planets; support for the mega-dollar quest was unwavering. Science became part of public consciousness.

Science for the non-scientist — an important spin-off from the space race. The interest continues today, not just in space, but in all areas of science. Year after year, studies sponsored by the U.S. National Association of Science Writers consistently show that the public has a lively interest in science news, reads a considerable portion of what is published and wants even more.

Scientists choosing to talk about their work or to comment and explain issues in the news related to their field give Canadians reasons to care about science. Science is given a context within our society and is portrayed as a human pursuit.

But are enough scientists telling their story? Do scientists have a responsibility to explain their work to the people who fund the projects? Could scientists make a clearer case for a comprehensive national science policy through their own dedicated program of show and tell?

Four science journalists don’t mince words when asked to comment on these issues. Stephen Strauss of The Globe and Mail, Richard Blackwell of The Financial Post, Eve Savory of CBC Television, and Anita Gordon of CBC Radio’s “Quirks and Quarks” all say scientists receiving government grants have a responsibility to explain their work.

“And I don’t mean explain it to other scientists or publish it only in science journals”, says Eve Savory. “Canadians need to know why they should care about science. People simply do not know enough about science and if scientists cannot describe the significance of their research – who will?”

Ms Savory believes it is a citizen’s right to know about developments that can affect life and lifestyle.

“Too many scientists simply retreat into jargon which is meaningless to the majority of the population. Ninety per cent of the time there is no need to use technical language. You are not talking to your peers when you talk to the public. And don’t worry so much about oversim­plification. I have mere minutes for my story about your science. I’m just trying to give citizens of Canada an overview, a snapshot.”

According to Richard Blackwell, the nature of a scientist’s work requires explanation and science journalists are there to help.

“Journalists try to examine the ramifi­cations of science. What could happen in the long run? Scientists could speak out on many issues. For example, universities are under much pressure from many sides. What is this pressure and what does it mean? We need explanations about the infrastructure of universities. Without explanations, it won’t be seen to be important.”

Mr Blackwell says scientists often have unreasonable concerns about being misquoted, or about their work being trivialized so they would be ridiculed by their peers.

“As a science journalist, my concern is for accuracy. Most things can be explained simply without being wrong or trivial. I am always willing to work with a scientist to make sure the story is right.”

Stephen Strauss thinks scientists have everything to gain by talking about their work to journalists.

“If scientists are really in the same world with the rest of us, they would realize that if people are more aware of scientific work, [then] the politicians might be more supportive”, he says. “Too many scientists think their work is of intense interest to only nine or ten others working in their field. I think it could also be exciting to others. Your work is adding bits and pieces to understanding. Surely that is impor­tant.”

Mr Strauss thinks Canadian scientists could take a lesson from their American colleagues.

“Of course it isn’t wise to generalize, but I do think American scientists make it easier for journalists. American universi­ties always tell us about results and findings, Canadian institutions just announce grants. That isn’t a story. As a science writer with the Globe I want to know about significant papers. If I know that major science journals publish your work, that tells me the work is something people should know more about.”

Strauss also says Canadian scientists could be more willing to look at the long· term consequences of their work.

“This statement may not make me friends at Canadian universities, but almost always I’d rather talk to an American about their work. Canadian scientists, with a few exceptions, are not willing to speculate. They have (an) immense cautiousness. I don’t want them to make false promises, I just want to know why the work is being done and what it could mean.”

Mr Strauss agrees with Mr Blackwell about scientists being too wary and nervous about interviews with the press.

“Science papers go through months of review and checking and group editing. Journalists don’t have time for this process. The paper comes out daily. In a newsroom, when a reporter writes a story about biochemistry or the economy, that person is the paper’s specialist on that topic.

“Reporters feel badly when a mistake is made. After all it’s our reputation too. And I don’t think we’re as bad at reporting science as some would believe.”

Each Saturday at noon, 400,000 people tune into the CBC’s “Quirks and Quarks”. Anita Gordon, executive producer of the radio show, says scientists must realize public opinion on science influences the politicians’ decisions on research funding.

“The old attitude that science is a pristine activity — distant, removed and above it all — doesn’t apply any more”, says Ms Gordon. “Talking about science isn’t akin to getting your hands dirty. If scientists don’t take us into the labs of this country, no one will.”

Gordon says many scientists fear journalists are out to distort or sensation­alize their work.

“Journalists work for clarity. Scientists could look to us to help communicate complex topics to the public. If a journalist calls, don’t automatically take a negative or adversarial role. In my nine years with “Quirks and Quarks”, I have never had a single call or letter from a scientist who was upset with how we covered the topic.

“Canadian scientists are shy. If I have any advice to those of you out there, hidden away in the labs of this country, it is to start blowing your own horns. Too much work in this country goes un­noticed.”

Ann Stevens is assistant director of public relations at Queen’s University. She has based this article on a longer one written for the Queen’s Gazette.