Canadian researchers in community health, engineering, war trauma and other fields, many with ties to the region, are offering their expertise as a way of helping over the long term. 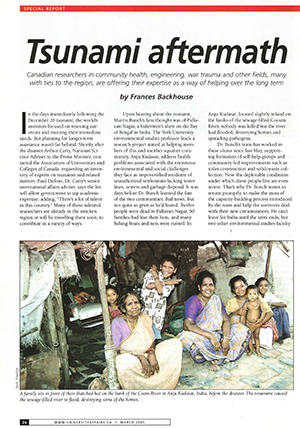 In the days immediately following the December 26 tsunami, the world’s attention focused on rescuing survivors and meeting their immediate needs. But planning for longer-term assistance wasn’t far behind. Shortly after the disaster Arthur Carty, National Sci­ence Adviser to the Prime Minister, con­tacted the Association of Universities and Colleges of Canada, requesting an inven­tory of experts on tsunamis and related matters. Paul Dufour, Dr. Carty’s senior international affairs adviser, says the list will allow government to tap academic expertise, adding, “There’s a lot of talent in this country.” Many of those talented researchers are already in the stricken region or will be travelling there soon, to contribute in a variety of ways.

Upon hearing about the tsunami, Martin Bunch’s first thought was of Palla­van Nagar, a fishermen’s slum on the Bay of Bengal in India. The York University environmental studies professor leads a research project aimed at helping mem­bers of this and another squatter com­munity, Anju Kudasai, address health problems associated with the enormous environmental and social challenges they face as impoverished residents of unauthorized settlements lacking water lines, sewers and garbage disposal. It was days before Dr. Bunch learned the fate of the two communities. Bad news, but not quite as grim as he’d feared. Twelve people were dead in Pallavan Nagar, 50 families had lost their huts, and many fishing boats and nets were ruined. In Anju Kudasai, located slightly inland on the banks of the sewage-filled Cooum River, nobody was killed but the river had flooded, destroying homes and spreading pathogens.

Dr. Bunch’s team has worked in these slums since last May, support­ing formation of self-help groups and community-led improvements such as toilet construction and solid-waste col­lection. Now the deplorable conditions under which these people live are even worse. That’s why Dr. Bunch wants to return promptly, to make the most of the capacity-building process introduced by the team and help the survivors deal with their new circumstances. He can’t leave for India until the term ends, but two other environmental studies faculty members – Beth Franklin and David Morley, who co-teach a graduate-level course on management in turbulent environments – have joined the project’s intern and Indian colleagues on site.

Simon Fraser University geography professor Jennifer Hyndman is another researcher with a personal connection to the tsunami-affected region. Since 1998, Dr. Hyndman has studied the lives of people displaced by the civil war in northern and eastern Sri Lanka. Hearing the shocking statistics of death and destruction, she was painfully aware of their implications for a country still trying to find peace after two decades of fighting. The death toll from the tsunami was nearly half that of the entire war, and a million people were suddenly home­less, many of them now twice-displaced. 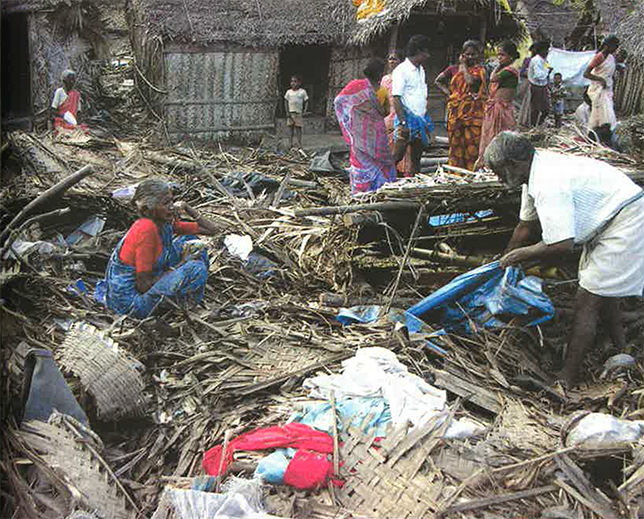 A couple pick through the ruins of their home in the Pallawan Nagar slum in Chenai, India, just days after the tsunami demolished it. Photo by Naina Shah of NGO “Exnora”.

With the news of Dec. 26, Dr. Hynd­man’s plan to spend February in Sri Lanka continuing a study of links between inter­national development aid and security had to be reconsidered, but she didn’t cancel the trip. As a former relief worker with experience in Somalia and Kenya, she has the skills to deal with the reali­ties of the tsunami’s aftermath. In fact, in early January UNICEF asked her to come immediately and work for them, an invi­tation she regretfully had to decline.

Although changed plans may delay completion of her current project, Dr. Hyndman’s only concern is for the people involved. “You can’t do research when distress is really acute,” she says. “If nothing else, I’ll just help Mala” – her Sri Lankan colleague, anthropolo­gist Malathis de Alwis, who took the UNICEF job in her stead. In the longer term, Dr. Hyndman hopes what she’s learned about war-displaced people will help those displaced by the tsunami.

Technical assistance
Canada’s first technical delegation to the region was a trio of engineers who trav­elled to Thailand at the end of January. During their one-week reconnaissance trip, structural engineering specialists Murat Saatcioglu of the University of Ottawa and Ahmed Ghobarah of McMas­ter University, along with loan Nistor, a U of O professor of coastal and hydraulic engineering, investigated the tsunami’s effects on coastlines and infrastructure such as buildings and bridges. Information they gathered will help determine appropriate rehabilitation and reconstruction methods and contribute to developing measures to minimize future tsunami damage.

Technical assistance of a different nature is being coordinated by Jonathan Baggaley, an educational technology pro­fessor at Athabasca University He recently completed an 11-country study tour of distance-education initiatives in Asia. One enduring image he brought home was of the Internet cafes that are informal classrooms for hundreds of thousands of Asians, many of them students of open universities delivering credit courses online to widely scattered learners. Know­ing online resources are in short supply in these countries, Dr. Baggaley has conceived a way to help Asian distance educators, in a wide range of natural and social science disciplines, incorporate the tsunami into their curricula.

Under Dr. Baggaley’s direction, a dozen graduate students who have skills in Web programming, design and content­-research are creating resources to serve as a focal point for teaching. By April they will have developed Web sites on scientific, educational, international aid and health aspects of the disaster. The four sites will be evaluated by a team of assessors from universities in Sri Lanka and Indonesia, then modified and integrated into a single site. Dr. Baggaley will have a chance to personally evaluate its usefulness when he returns to Asia this spring.

In Indonesia, a community health project that Memorial University helped establish (under CIDA’s University Part­nership in Cooperation and Develop­ment program) is being tapped for its expertise. Indonesia’s health ministry asked the project’s founding local direc­tor, Yani Hamid, to assess how the community health approach could be adapted to the immediate and long-term health needs of Aceh, the hardest-hit area of the country. One of the ministry’s pri­orities is to train local nurses in the evi­dence-based approach. Kay Matthews, a professor of nursing at Memorial and the Canadian project director, plans to travel to Aceh to help in the assessment.

Philip Cook, executive director of the University of Victoria’s International Institute for Child Rights and Develop­ment, is using his knowledge to help the youngest citizens of the tsunami-affected countries cope with grief, despair and uncertainty Having worked with war­traumatized youngsters in Chechnya and AIDS orphans in South Africa, Dr. Cook knows children grieve differently than adults. He says efforts to promote psycho-social healing work best when they’re integrated into regular activities, such as school. He is a proponent of nature-based therapy, often in conjunc­tion with story-telling and art. “Recon­necting children to the natural world is the first step to reconnecting them to the human world,” he says. With that in mind, he has brought together a team to train teachers in India and Indonesia in these therapeutic methods.

Dr. Cook and representatives of Save the Children Canada, the institutes main partner in this initiative, left in late Janu­ary to assess the situation and consider cultural traditions and values that will shape their approach. A larger working group will follow in March or April. Dr. Cook expects the project will continue for at least two years. “Global interest will soon start fading,” he says. “We want to ensure resources keep reaching the people who need them most.”