Aggressive recruiting: for some essential for others anathema

High school’s behind me
I’m headin’ on out
Wanna keep on learn in’
Gonna find myself, find myself a place
Gonna check out Guelph
Myself and Guelph …

These words accompanied by a catchy pop tune were played 10 times every day for six weeks on radio stations across Ontario. The advertisements were aired during the period when Ontario high school students traditionally apply to universities. 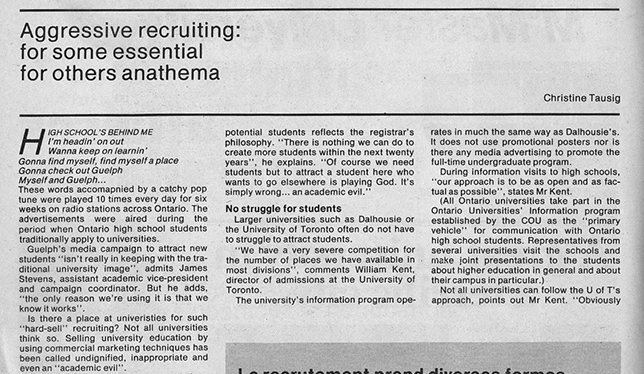 Guelph’s media campaign to attract new students “isn’t really in keeping with the tra­ditional university image”, admits James Stevens, assistant academic vice-president and campaign coordinator. But he adds, “the only reason we’re using it is that we know it works”.

Is there a place at universities for such ”hard-sell” recruiting? Not all universities think so. Selling university education by using commercial marketing techniques has been called undignified, inappropriate and even an “academic evil”.

As enrolment declines, however, more and more universities may be forced to use the hard-sell in order to survive.

University Affairs spoke to registrars and other university officials in Ontario and Nova Scotia — both provinces with a large number of universities competing for potential stu­dents — in order to find out whether the hard-sell has really hit university education.

Recruitment a “dirty word” at Dalhousie

“We don’t admit that we recruit. To us that’s a dirty word”, says A.J. Tingley, regis­trar at Dalhousie University.

At Dalhousie full-time undergraduate enrolment has risen by about 400 students since last year according to Statistics Canada figures. The increase is not the result of any publicity efforts.

Dalhousie has no posters to attract stu­dents, no special brochures, no films or radio jingles. University representatives visit Maritime high schools to give information to students, teachers and guidance counsel­lors. These visits are usually part of regular “career days” at Maritime schools, when representatives from several universities and businesses disseminate information.

Dalhousie officials visit only schools to which they have been specifically invited and rarely go to any schools outside the Maritimes.

The university’s information program for potential students reflects the registrar’s philosophy. “There is nothing we can do to create more students within the next twenty years”, he explains. “Of course we need students but to attract a student here who wants to go elsewhere is playing God. It’s simply wrong … an academic evil.”

No struggle for students

Larger universities such as Dalhousie or the University of Toronto often do not have to struggle to attract students.

“We have a very severe competition for the number of places we have available in most divisions”, comments William Kent, director of admissions at the University of Toronto.

The university’s information program operates in much the same way as Dalhousie’s. It does not use promotional posters nor is there any media advertising to promote the full-time undergraduate program.

During information visits to high schools, “our approach is to be as open and as fac­tual as possible”, states Mr Kent.

(All Ontario universities take part in the Ontario Universities’ Information program established by the COU as the “primary vehicle” for communication with Ontario high school students. Representatives from several universities visit the schools and make joint presentations to the students about higher education in general and about their campus in particular.)

Not all universities can follow the U of T’s approach, points out Mr Kent. “Obviously the needs of universities differ. Different cir­cumstances may call for different ap­proaches.”

The University of Guelph’s advertising campaign rose out of a need to change the university’s image, explains Dr Stevens.

People often see Guelph simply as a place to study agriculture or veterinary medicine, he comments. “We had to increase the awareness of the public about Guelph and try to get them to think about Guelph in broader terms …. We wanted to increase our share of students coming from larger metropolitan areas.”

Dr Stevens refuses to disclose the cost of Guelph’s advertising campaign. He did say that an estimate of $200,000 — quoted by CBC television national news — was “too high”.

“We did it on the cheap. We used a Guelph graduate who is working in adver­tising in Toronto … he got the radio tape done through his connections and we got a fantastic buy on the radio time for six weeks.”

Guelph students have criticized the cam­paign’s emphasis on lifestyle rather than academic qualities, calling the advertise­ments “silly, embarrassing and degrading”. Dr Stevens, a former physics professor, says he can understand the criticisms that the campaign lacks dignity.

But he points out that Guelph’s commer­cial marketing techniques were well received by the target audience, the 15 to 17 years-olds, many of whom were humming the radio jingle when Guelph liaison officers visited their schools.

Some universities use advertising without considering it hard-sell marketing.

Lakehead University, located in sparsely populated northern Ontario, has been using a radio advertising campaign for the past four years. The radio advertisements are augmented by various promotional publica­tions and a 10-minute 16mm film entitled “Learn Naturally”. The film is shown mainly at high schools when the university’s liaison officers visit.

Lakehead’s radio advertisements are not “lifestyle jingles”, according to P.A. Paula­rinne, the university’s registrar. “They are tasteful, appropriate ads.”

Mr Paularinne emphasizes that there is “absolutely no place” for hard-sell adver­tising at universities. Media advertising of Lakehead is a necessity, however.

“We have to undertake advertisements because of our location. We can’t afford to sit back smugly as some of the older, more established universities do and say we don’t have to advertise. It’s important to inform people of our existence.”

Université Sainte-Anne, an isolated Nova Scotia university with a full-time enrolment of less than 200 students, is another univer­sity that has turned to media advertising in order to inform students.

“We are the only university in Nova Scotia using TV ads”, states G.C. Boudreau, regis­trar and public relations director. “We are still very small and unknown in most parts of Nova Scotia … TV reaches so many people at one time. We get more for our money through TV than we do in newspapers.”

Some neighboring universities objected to Sainte-Anne’s use of television advertising adds Mr. Boudreau. But he points out that “all universities advertise m newspapers”. He sees television as simply another medium.

This is the second year that Saint-Anne has used television. The 30-second adver­tisements have been shown on the independent ATV network and on both French and English CBC stations across the province. The advertisements feature shots of the campus with a script describing the university’s bilingual program. They are not at all hard-sell, stresses Mr Boudreau.

“Students are more intelligent than uni­versity recruiters think”, explains Dr Tingley at Dalhousie. “The students see through the marketing techniques.”

Elizabeth Chard, registrar at Saint Mary’s University agrees that marketing techni­ques can drive away good students. She warns that aggressive recruiting gimmicks such as those used by some American uni­versities must be approached with great cau­tion by universities in Canada.

Saint Mary’s, one of the five degree-­granting institutions in Halifax attracts stu­dents primarily by sending out university literature and by personal contacts. “The best recruiter we have is a satisfied stu­dent”, she comments.

“Some of our competitors think we do a hard-sell job but I think it’s just a healthy rivalry”, comments Ms Chard.

A healthy rivalry among universities helps students make a wiser choice when applying, argues D.A. Chambers, registrar at the University of Westem Ontario.

Western has been accused in several newspaper reports over the past few years of running a “lavish” campaign. Dr Cham­bers disagrees.

“We’ve steered away from being hard­-sell”, he says. The university participates fully in the Ontario Universities’ Information Program.

In addition Western operates a “high school auxiliary program”. University officials rent a hotel meeting room in 35 centres across the province and invite grade 13 students who have applied to Western, their parents and local guidance counsellors to visit and ask questions.

The guidance counsellors are also invited to a “very small luncheon” at which Western officials answer questions about specific applicants and explain university programs. “I don’t think a beer and a cold meat sand­wich is lavish”, comments Dr Chambers.

Western’s campaign has been plagued by problems in the past few years. One year 8,000 cards informing prospective students of their appointments to visit Western were lost. The university was forced to advertise in newspapers and radio telling students to call.

Last year scholarship offers — which according to COU guidelines cannot be sent to students before a certain date — were sent out early due to an “overzealous clerk” at the telegram office, explains Dr Cham­bers.

How much does it cost?

Some universities question whether expensive advertising campaigns provide returns. Estimates of the cost of changing one student’s mind range from $200 to $2,000.

“In recruitment you have to spend money in order lo make money”, says Jack Porter, registrar at Sudbury’s Laurentian University, adding that Laurentian has not made that decision to spend money.

Many universities are reluctant to reveal the cost of their promotional campaigns.

A.L. Darling, registrar at McMaster University, says that the university spends about $190,000 on its relatively “conservative” pro­motion and high school liaison campaign. The registrar stresses that this is a “very small” amount compared to the university’s total budget.

At the Université Sainte-Anne the cost of publicity for a ten month period including television advertisements amounts to $53,000. This is about 3.4 per cent of the total university expenditures during that time.

William Sayers, director of communica­tions at the COU, estimates that Ontario uni­versities will spend more than $1 million to attract students this year.

Spending money on recruitment does not guarantee an enrolment increase, cautions Mr Kent, who in addition to his work at the U of T is also president of the Association of Registrars of Universities and Colleges of Canada. “I don’t think you can always es­tablish a direct relationship between promotional campaigns and the actual number of students.

“It’s always the assumption that the more aggressive you are, the more students you’ll get. I don’t think that’s necessarily true.”

Someone will always suffer when re­cruiting tactics become aggressive, say some university officials.

There are only a certain number of students interested in higher education, and recruiting campaigns merely cause them to switch their applications from one university to another.

“It seems silly to me that we go out and steal from each other”, states Mr Porter at Laurentian.

“Our enrolment at all universities may go down by 25 per cent in the next 10 years but that’s better than if we go out of business”, asserts Mr Stead.

Others caution that selling university edu­cation may prove not only expensive but also dangerous. Warns Mr Stead at Acadia: “We have to realize that if someone becomes aggressive, someone else will not survive.”

Is aggressive marketing of university edu­cation simply the survival of the fittest? There is no consensus among university officials in Nova Scotia and Ontario.