Where can a PhD in STEM lead?

Three grads share their paths leading to careers outside of the academy.

While it is well established that an academic career as a faculty member is only one possible outcome for someone who has earned a PhD, we are only starting to understand the myriad of post-PhD career paths. Clarity in understanding how PhD earners continue contributing to knowledge, economic and social advancement following their doctoral work is important if universities wish to support the pursuit of meaningful careers by their graduates. When it comes to those who hold PhDs themselves, clarity on this process is critical to professional growth and personal well-being.

By looking at the varied career paths pursued by these highly trained individuals, we can start to build a more detailed picture of the wide range of technical and transversal skills utilized along the way. Unsurprisingly, the recommendation to make outcome data on graduate student careers more readily accessible remains a consistent theme in guides and reports aiming to promote best practices in graduate education.

Here, we share the narratives of three individuals – who they are, what motivated them to pursue their PhD and resulting career path, and where they are now. These narratives are a part of the TRaCE McGill project, one of a number of encouraging recent initiatives that focus on understanding PhD employment outcomes and their experience  as they transition into the workforce.

Caolan decided to pursue graduate studies because he was drawn to the freedom to follow interesting ideas, the potential to discover new concepts and phenomena and solving hard problems. 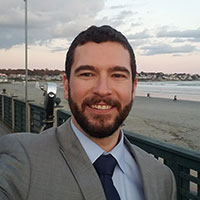 Searching to combine his passions for nature, ecology and making things better, Caolan pursued a PhD in biology at McGill University where he focused on predator-prey interactions. While Caolan recounts a positive graduate experience with abundant opportunities to engage in stimulating conversations and learn, he also recalls challenges in making connections with graduate students. He felt isolated when he first arrived, noting that it was harder to create connections as a graduate student than it had been as an undergrad.

Caolan was planning to be a professor until about three years into his PhD program when he realized this path did not align with his financial goals. When he first started to think about leaving academia, it was just for the amorphous “industry.” As he got closer to graduation in 2015, he started to narrow in on a career in data science and analytics.

Prior to his recent move to Hippo Insurance, Caolan headed a data science and engineering team for Verisk Analytics. Like many other PhD holders, someone in his network connected him with the company. During the initial job search, Caolan notes that the hard part wasn’t finding a job, it was finding a job that put him on the right trajectory. Explaining to others the skills that he gained in conducting research during his PhD program was also a challenge, and something he still needs to do to this day.

After going through the hiring process and hiring others, he stresses that it’s important for people with PhDs to sell themselves as someone who can solve problems and doesn’t need too much oversight, especially if they are trying to get into a research and development position.

Caolan’s role at Verisk Analytics was very similar to his graduate work. He finds that the big picture questions change, the expectations on when and how you work change, but in many ways, it’s the same. Caolan also identifies some valuable graduate experiences, such as presenting at a graduate student symposium and being a teaching assistant, that were helpful when moving into industry, particularly for public speaking and keeping a team engaged and motivated.

Despite his positive experience, Caolan wishes he had gotten more help on how to build and maintain a network. Beyond networking to get a job in the first place, he identifies building a network within a community or company to be particularly important for advancement. He also wishes he had prioritized his personal well-being to a higher degree, noting that now he is able to work much more effectively with less anxiety.

Tim’s journey to his PhD was less direct than Caolan’s. While doing his master’s research on a completely different subject (structures on the side of riverbanks to help rehabilitate trout habitats), Tim heard some friends had entered a competition sponsored by the European Space Agency on how to find water on Mars and asked to join. After the contest, the professor mentoring the group asked him if he wanted to do a PhD on the topic, and he ended up researching permafrost geomorphology – understanding the evolution of icy terrain and comparing northern Canada to Mars. 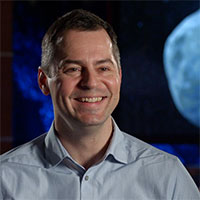 Tim had been interested in space since he was a little kid, but changing research areas completely meant that he had a huge learning curve to overcome at the start of his PhD. He remembers one of the things that helped the most was going to the Arctic for the first time the with another PhD student the summer before he started his program. Reflecting on this experience, he notes, “You can always learn the theoretical, but there is no substitute for physically being there.”

Actively seeking out connections and communities was essential to Tim’s success. He recalls being the only person in the department doing any planetary science, which forced him to reach out to people from around the world. Tim recalls that starting to build his network was “a little nerve-wracking” but also that the scientific community he sought ended up being very receptive.

Where Tim could not find a community, he helped create one. When a friend at McGill asked him to start an international organization for graduate students studying permafrost (Permafrost Young Researchers Network), he thought, “Why not?” What started with a few emails has turned into, a dozen years later, a self-sustaining organization with hundreds of representatives from around the world.

Looking back at his transition from McGill to the Canadian Space Agency, Tim emphasizes that being involved in multiple, diverse projects was the single most valuable thing that helped him prepare for a career – not his thesis. He remembers, at the time, thinking that these projects were taking away from what he was supposed to be doing. In reality, there is no time you are ever going to be able to dedicate yourself solely to one subject, he says, and that the ability to multitask, find efficiency and work with others are invaluable skills.

Unlike many PhD holders, Tim started his program with a specific, non-academic career goal in mind – to get a research position at the space agency. When he was considering whether to do a PhD, the best piece of advice that he got was that a PhD is a membership card. “If you need that membership card to get what it is that you want, then go get the card. And if you don’t, then don’t.” Though he does miss doing experiments and figuring things out, what he appreciates the most about his current position is that he’s involved in projects that he never would have been part of if he stayed in his own discipline.

From biology PhD to policy analyst for the Government of Canada

Monica loves the scientific method, which is what piqued her interest to pursue a PhD. This interest took her to forests, lakes and the ocean where she became fascinated with food webs. Monica wanted to do a PhD to have the opportunity to continue to ask questions about the natural world but also to challenge herself to complete the monumental task of successfully completing a doctoral program. 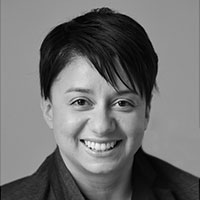 As in the stories of Caolan and Tim, Monica’s career path was not linear. She did not find herself where she expected to be. At the very beginning of her PhD, Monica thought that she would either go into academia or work as a research scientist for the government. However, following her PhD, Monica participated in the Mitacs Canadian Science Policy Fellowship, which takes people with science PhDs and puts them in policy roles allowing their scientific expertise to inform government.

Monica describes her current position as a policy analyst to be markedly different from her activities as a PhD student. Unlike her responsibilities as a practicing scientist during her PhD, she now takes scientific information and translates that to provide recommendations to the government. She notes that her PhD experience is relevant to her current role because she developed her ability to understand science and translate scientific information whilst building a strong scientific background. More importantly, her PhD gave her the opportunity to work on open science, her current area of expertise.

“This [open science] wasn’t directly related to my PhD; it was something that I pursued on the side. It’s what really forms the basis of my career path now.”

Monica cites several challenges in getting to where she is today, particularly a lack of resources and career guidance. She notes that being surrounded by other academics and having this path as the only model that she saw made her somehow believe that path was the only way forward. Monica praises her graduate community for helping her through the challenges and cites mentorship from her fellow graduate students as the best part of her program at McGill.

When asked what she wishes she knew before starting the PhD, she says “I wish I had known there were more opportunities in other career paths and to not frame them as failures. I wish I knew then how happy I could be not being an academic.”

On her final interview note, Monica emphasizes a balance of thesis work and the pursuit of other projects. She acknowledges that a lack of concentration on your thesis can be costly in terms of time and money, but that the opportunity to pursue other projects to develop skill sets is incredibly important because that’s often what makes you hirable.

These three narratives, while still in progress, provide tremendous insight as to the breadth of opportunities available to PhD earners. Each of the stories shared here reveal career paths that are not linear. Importantly, they provide examples of success defined outside of the traditional professorship role.

Collectively, these narratives offer themes of passion, changed expectations and tremendous effort in navigating a new professional space. Social connections were also integral to each experience (e.g., mentorship, networking and community). Contrary to popular belief from within the academy, these narratives also provide examples of people who are employed in roles that are satisfying and intellectually challenging – and exist outside of the postsecondary sector.

Each of these narratives also highlights an important perception – that the thesis is one of many projects that contribute to the professional development and career success of PhD holders. Competence involves an orchestration of many different skills, attributes and behaviours at the right time. Broadening our perception of a PhD program beyond courses, lab work and a thesis affords opportunities to use the skills developed during the research process in varying contexts – opportunities to gain and grow competence and versatility.

Narratives of the career experiences of PhD holders provide valuable information as to facilitators, barriers and opportunities that lie on their path to contributing to the knowledge, economic and social advancement of Canada. In tangent with broader initiatives to collect statistical data, narratives such as these are necessary for interpreting such data. PhDs go on to work in varied sectors and job functions, often in areas outside of their thesis expertise. Understanding how they get there and sharing those stories can open doors for others, and consequently create opportunities for innovation and growth on individual and organizational levels within Canada and globally.