But rising workload a concern as demands on professors’ time multiply. 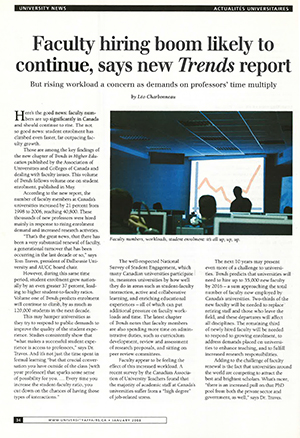 Here’s the good news: faculty num­bers are up significantly in Canada and should continue to rise. The not so good news: student enrolment has climbed even faster, far outpacing fac­ulty growth.

Those are among the key findings of the new chapter of Trends in Higher Edu­cation published by the Association of Universities and Colleges of Canada and dealing with faculty issues. This volume of Trends follows volume one on student enrolment, published in May.

According to the new report, the number of faculty members at Canada’s universities increased by 21 percent from 1998 to 2006, reaching 40,800. These thousands of new professors were hired mainly in response to rising enrolment demand and increased research activities.

“That’s the great news, that there has been a very substantial renewal of faculty, a generational turnover that has been occurring in the last decade or so,” says Tom Traves, president of Dalhousie Uni­versity and AUCC board chair.

However, during this same time period, student enrolment grew nation­ally by an even greater 37 percent, lead­ing to higher student-to-faculty ratios. Volume one of Trends predicts enrolment will continue to climb, by as much as 120,000 students in the next decade.

This may hamper universities as they try to respond to public demands to improve the quality of the student expe­rience. Studies consistently show that “what makes a successful student expe­rience is access to professors,” says Dr. Traves. And it’s not just the time spent in formal learning “but that crucial conversation you have outside of the class [with your professor] that sparks some sense of possibility for you …. Every time you increase the student-faculty ratio, you cut down on the chances of having those types of interactions.”

The well-respected National Survey of Student Engagement, which many Canadian universities participate in, measures universities by how well they do in areas such as student-faculty interaction, active and collaborative learning, and enriching educational experiences – all of which can put additional pressure on faculty work­loads and time. The latest chapter of Trends notes that faculty members are also spending more time on admin­istrative duties, such as curriculum development, review and assessment of research proposals, and sitting on peer review committees.

Faculty appear to be feeling the effect of this increased workload. A recent survey by the Canadian Associa­tion of University Teachers found that the majority of academic staff at Canada’s universities suffer from a “high degree” of job-related stress.

The next 10 years may present even more of a challenge to universi­ties. Trends predicts that universities will need to hire up to 35,000 new faculty by 2016 – a sum approaching the total number of faculty now employed by Canada’s universities. Two-thirds of the new faculty will be needed to replace retiring staff and those who leave the field, and these departures will affect all disciplines. The remaining third of newly hired faculty will be needed to respond to growing enrolment, to address demands placed on universi­ties to enhance teaching, and to fulfill increased research responsibilities.

Adding to the challenge of faculty renewal is the fact that universities around the world are competing to attract the best and brightest scholars. What’s more, “there is an increased pull on that PhD pool from both the private sector and government, as well,” says Dr. Traves.

Canadian universities are respond­ing by expanding graduate programs, but the country still won’t produce nearly enough PhD graduates to fill the spots, he says. “It’s going to be a difficult decade for us to make sure that we get the num­bers we need and the quality we need.”

The elimination of mandatory retire­ment at age 65 throughout Canada will have an impact on faculty attrition by prompting some professors to prolong their careers (Quebec and Manitoba haven’t had mandatory retirement since the 1980s). However, the effect of this change on overall faculty numbers will be felt only in the short term, says the report.

Ken Snowdon, an educational policy analyst in Kingston, Ontario, agrees with that assessment. “In the long run there will be a new equilibrium, but it will be at a higher age,” he says. In the U.S., where mandatory retirement was phased out more than 20 years ago, experience suggests the great majority of faculty retire before age 70, but an increasing number are working past that age.

Those who do stay will likely be the ones who are still active in research, says Mr. Snowdon. “As long as they’re able to meet the peers review criteria and continue to generate grants, I expect there will be a very welcome home for them,” he says.

Institutions also see the value of keeping senior faculty around as mentors for junior faculty and graduate students. “Often you need people who have experi­ence in research grant writing and direct­ing research operations … They have a tremendous amount of experience.”

Mr. Snowdon also believes that, despite growing faculty workloads and expectations, “it’s actually a very exciting time to be in academe.” With rising enrolments, continued increases in research funding, rising compensa­tion levels for faculty, and universities aggressively competing to recruit and retain good scholars, the times are good.

“It really is quite a different environment than it was, say; through the mid-’90s, when people were quite depressed about being in the university sector.”