The Association of Faculties of Medicine of Canada has approved a Joint Commitment to Action on Indigenous Health that Indigenous health leaders say provides a much-needed roadmap for training medical students to better serve Indigenous communities.

Marcia Anderson, chair of the AFMC’s Indigenous network, said the commitment was made in response to the Truth and Reconciliation Commission’s calls to action. She said she hopes it will bring consistency to Indigenous health initiatives that, to date, have been “highly variable” across Canada’s medical schools.

The University of Manitoba, where Dr. Anderson is a faculty member, underwent a curriculum renewal in 2014, which saw the Indigenous health curriculum increased from 11 hours to 70 hours over the four-year medical degree program. But, progress is relative. “We have a very strong team and [yet] our Indigenous health course facilitators still experience a lot of racism,” she said. To support Indigenous educators, the university has pre-briefing and debriefing sessions, and Indigenous educators teach alongside non-Indigenous educators. This ensures that the work of responding to subtle or overt racist remarks doesn’t fall solely on Indigenous teachers, and “highlights the roles and responsibilities of allied, or settler, physicians.”

The Northern Ontario School of Medicine, a partnership between Lakehead and Laurentian universities, has made the promotion of Indigenous health a key pillar since its founding in 2005. The school integrates Indigenous health into the curriculum through lectures, small group sessions, case studies and mock clinical sessions with Indigenous actors. In addition, the school sends all first-year students to work in an Indigenous community for a five-week period. “I think we’re the only one in the world that does this,” said Lorrilee McGregor, an assistant professor of Indigenous health at NOSM.

The experience helps the students better understand the intergenerational trauma and resilience of communities, said Dr. McGregor. “Several students have said to me, we have heard about residential schools and read about it, but hearing directly from residential school survivors and their children brings home the impacts,” she said.

Nicole Labine, an Indigenous surgery resident at the University of Saskatchewan, said she’s glad to hear that all of Canada’s medical schools will be building these kinds of connections with Indigenous communities. “Often, Indigenous students will have to travel really far from their home community to attend medical school,” she said. Not only will long-term relationships help all students better understand their responsibility to Indigenous people, but it will allow Indigenous students “to maintain access to a sense of culture and find their own belonging within the faculty.” 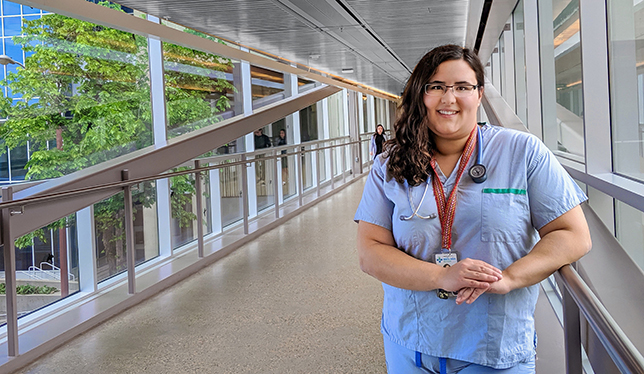 At the University of Alberta, where Dr. Labine graduated from medical school this past spring, members from nearby Indigenous communities are involved in decision-making from the admissions stage. Indigenous panelists interview all Indigenous candidates “to determine that candidates understand the systemic nature and root causes of the health problems experienced disproportionately by Indigenous peoples as well as their commitment to working to improving the health system and working within communities,” explained Tibetha Kemble, director of U of A’s Indigenous health initiatives program. The university will be welcoming 11 Indigenous medical students this year, more than triple the number in 2017, she added.

One way the university fosters a shared understanding of the impacts of colonialism on Indigenous people’s physical and mental health is the KAIROS blanket participatory exercise, which has also been used by other medical faculties in Canada. In this 90-minute activity, part of the Indigenous health course at U of A, students are instructed to sit on blankets spread out on the ground that represent the land belonging to Indigenous people before colonization. “People are moved off the blanket through disease, forced relocation, residential schools, blankets are folded up. It’s a very powerful exercise,” said Ms. Kemble.

The University of British Columbia is another school already pursuing many of the joint actions agreed upon across Canada. James Andrew, the Aboriginal student initiatives coordinator, has been working to increase Indigenous applicants in the UBC medical faculty since 2012. He advises other medical schools to ensure their process involves more than applicants checking off a box to identify as Indigenous. At UBC, applicants write an autobiographical essay explaining their background, and students who are non-status are supported in a process to show proof of ancestry to a committee that ensures strict student confidentiality.

UBC also works to inspire Indigenous students to apply to medical school very early on by hosting workshops for high school and university students, rotating their locations around the province every year. Students learn about the prerequisite courses they’ll need, how to prepare for the MCAT and go through a mock multiple mini-interview (MMI), a screening process used by most medical schools.

Mr. Andrew says Indigenous health leaders will need to ensure that there is broad buy-in across the university. “It’s not just the admissions office. The entire faculty, the dean and the university as a whole need to be supportive,” he said.