Tasha Brooks likes to have an open-door policy. As one of Vancouver Island University’s four new “education navigators,” her job is to help First Nations students to transition into university and complete their education. “I’m very open about my own struggles through university,” says Ms. Brooks, who earned two degrees in business administration at VIU. “They can look at my past and say, she was also like me, very close to dropping out at some point. … I’m there to not only support them but I can empathize with them.”

Ms. Brooks’ position is one part of a new learning partnership aimed at increasing the number of Indigenous students enrolled in postsecondary education and helping them to succeed through a wide range of supports. The five-year partnership between VIU, Yukon College, Rideau Hall Foundation and the Mastercard Foundation – the latter of which put up $22.5 million in funds – officially launched in September.

At VIU, $13.5 million in funding will go largely toward student scholarships to help more Indigenous students enter and complete their studies. New tuition support for 250 students will match community support previously offered to 250 students. First Nations communities “can fund students up to a certain amount based on INAC (Indigenous and Northern Affairs Canada) funding, but a lot of them carry waitlists,” said Sharon Hobenshield, director of Aboriginal education and engagement at VIU. “That’s our number one priority.”

Among the reasons VIU was selected for the pilot program was the quality of its relationships with local First Nations and community partners, said Scott Haldane, president and CEO of the Rideau Hall Foundation. VIU also had existing supports for Indigenous students, such as its Community Cousins program. Created in 2011, the program connects incoming students with Aboriginal student “cousins” who offer mentorship to their peers while gaining employability skills in the process. An Elder-in-Residence provides guidance to the mentors and also supports Indigenous ways of knowing on campus. The learning partnership will fund supports like these, which will be accessible to VIU’s 1,800 Indigenous students. 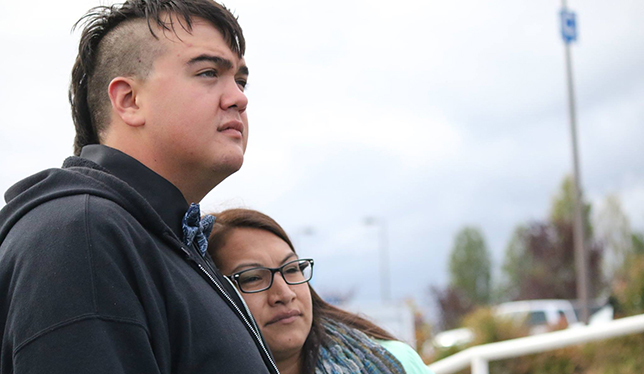 The goals at Yukon College are slightly different: helping 300 students to complete trade, certificate and degree programs, and creating distance-learning opportunities and pathways for students transitioning from care homes, treatment facilities and the justice system. Its share of the new funds – $4.6 million – will go toward case managers and tutors, to programs reaching out to youth who are disconnected from education and to new online credit courses to engage rural students.

“What we find is in every region, every institution and every First Nation, in fact, the needs are different,” said Mr. Haldane. The Rideau Hall Foundation is managing the program and providing staff support on a national level. “The goal is to do something special here that then can be scaled across the country – and hopefully mobilize governments to learn from what we’re doing,” he said.

Just over a year ago, the Mastercard Foundation struck up a conversation “to do something meaningful” for Indigenous youth with the Rideau Hall Foundation, established by former governor general David Johnston. The investment of $22.5 million marks the first in Canada for the Mastercard Foundation, a global foundation headquartered in Toronto whose philanthropy up until this point has focused on education and access to financial services in Africa.

“The stars started to align. We said we would be very interested in learning and listening,” said Reeta Roy, president and CEO of the Mastercard Foundation. “We undertook a considerable amount of research – most of it in the form of conversations with educators, with universities, with Indigenous elders and a lot with young people.”

The two foundations honed in on two pilot sites – in both cases, smaller institutions – where relationships with First Nations communities were well established. The partners have said that the essential ingredient in the design of the program has been convening and listening to Indigenous youth and their communities.

“Typically, foundations wait for somebody to make an application and decide whether that fits into their priorities. … I can’t think of a more colonial structure,” Mr. Haldane said. “We’ve turned that paradigm completely upside down. The funder comes in and says, ‘tell us what you need.’”

As the program rolls out, the partners will be looking at how well the design works, what needs to be strengthened and what can be built upon. “I think there’s considerable potential for the program to expand,” Ms. Roy said.