Women in STEM take to their soapboxes – literally

Soapbox Science trains women working in STEM to engage the public about their research by taking it to the streets.

You’re walking along the boardwalk near the Harbourfront Centre in Toronto, when you see a crowd of people standing around a particularly tall woman. As you get nearer, you notice the woman is wearing a lab coat and is actually standing on a box – a soapbox to be specific – and she is explaining how Jello could be used to regenerate an injured spinal cord. You look around and see a few other women, also on soapboxes, excitedly speaking as well – all with people standing around, listening intently. This is Soapbox Science at its best.

“This event focuses on challenging gender stereotypes and really engaging with the public at a street level, both in a physical sense and in a metaphorical sense,” says Imogen Coe.

Soapbox Science, an award-winning science outreach platform, was first created in the U.K. in 2011. It expanded to Australia, India and Europe, and was brought to Canada in 2017 by Dr. Coe, dean of science at Ryerson University. 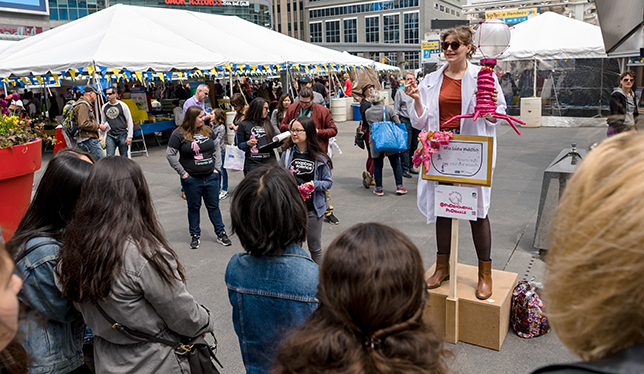 Sasha Weiditch from the University of Toronto Mississauga presents at a Soapbox Science event at Yonge-Dundas Square.

The university hosted its first Soapbox Science event in May at Yonge-Dundas Square. Twelve speakers, all women in STEM, participated after applying through the Soapbox Science website. “We actually got applications from across the country, which was really awesome,” says Leigh Paulseth, who coordinated the event and works at Ryerson as enrichment and outreach coordinator with the SciXchange centre for science communication. Once the speakers were selected, they received public speaking training from a Toronto comedian.

“This is a very different kind of speaking opportunity. And having someone who is really used to being in front of an audience who knows nothing about them was really helpful,” says Ms. Paulseth.

Scientists were asked to prepare an accessible 15-minute talk about their research – and they could incorporate props. Speakers were on their soapboxes for about one hour, cycling through their talk several times, and often discussing their research more generally. “And that is just because folks asked them about this or that, and they were happy to go off and answer the public’s questions,” says Ms. Paulseth.

The university hosted a second event at the Harbourfront Centre in September. Their aim, says Dr. Coe, is to raise the profile of underrepresented groups in STEM. “It is a way to normalize the fact that women of all shapes, sizes, ages, colours, backgrounds, do science. Women are not a diversity group, they are 50 percent of the population,” she says.

Ms. Paulseth notes that Soapbox Science helped the university collect data at both events, including how long people stayed to listen and their level of engagement. “Each [Soapbox Science] site is responsible for delivering [that data], so there’s a questionnaire that we have people fill out, and then we will also track random visitors, just to see how long they stayed, which speakers they watch.”

Overall, a Soapbox Science event is simple to run, says Ms. Paulseth, though getting the first one off the ground can be an uphill battle. A support team is important in the process, she says, adding that she would be happy to help any other institution in Canada looking to get involved.