To mark the magazine’s 60th anniversary, current editor Léo Charbonneau sits down with the magazine’s two preceding editors to look back on the issues, events and personalities covered in its pages over the years.
BY LÉO CHARBONNEAU
SEP 23 2019 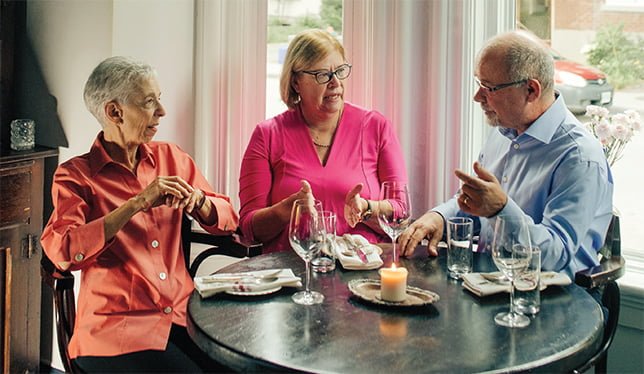 To mark the magazine’s 60th anniversary, current editor Léo Charbonneau sits down with the magazine’s two preceding editors to look back on the issues, events and personalities covered in its pages over the years.

When Christine Tausig Ford was first hired as a staff writer for University Affairs in 1979, the magazine was marking its 20th anniversary. She had recently completed a one-year honour’s degree program in journalism at Carleton University (coincidentally, her two successors also graduated from the same program, which no longer exists). She stayed for three years, left to have a daughter, came back to the Association of Universities and Colleges of Canada (now Universities Canada, publisher of UA) as an information officer, and then rejoined the magazine, officially becoming editor in November 1991.

Peggy Berkowitz was hired by Ms. Tausig Ford in 1994 as a senior writer and was later promoted to managing editor. Ms. Berkowitz, who had worked for CBC News, the Wall Street Journal and as education reporter for the Ottawa Citizen, took over as editor in 2001, when Ms. Tausig Ford became publisher.

Léo Charbonneau, a long-time reporter and editor in business and trade publishing, was hired as a senior writer for UA in 2000, became deputy editor in 2003 and took the helm of the magazine in the fall of 2015 upon Ms. Berkowitz’s retirement. (Ms. Tausig Ford retired a year later and has since founded a higher-ed consultancy.)

The three “generations” of editors recently sat down to look back on the evolution of the magazine and the issues, events and personalities it has covered over the years.

Léo Charbonneau: Christine, let’s start with you. What did the magazine look like when you began and how did it evolve in your time as editor?

Christine Tausig Ford: The magazine was black and white, with a single “spot” colour. The paper quality was poor. There was no interest in making the articles stand out. When I took over as editor, one of the first things I wanted to do was move the design forward. There was this new thing called “desktop publishing,” and it was revolutionary at the time. We also actively went out to ask what readers wanted. We did focus groups.

Peggy Berkowitz: The readership surveys were very important for the direction of the magazine back then.

LC: Nowadays, of course, with Google Analytics, you know instantly which stories are popular, you don’t have to guess. There are some perennial favourites, like “How to ask for a reference letter.”

CTF: That’s interesting, because the trend at the time I took over was service journalism. We had a lot of articles like, “How to tell the public about your research” or “Four profs tell you how they turned their course around.” We also brought in a financial advisor for university faculty and did columns on that. We aimed to write articles that were useful in the day-to-day life of faculty members.

LC: Do you remember what some of the key issues were in higher education when you started out?

CTF: When you look at what was hot so many years ago, things haven’t changed all that much. I know that in my first issue, we reported on a commission on university education that AUCC had launched, the Smith Commission, which was very controversial. It came out with 60 actions universities should take, mostly focused on improving the balance between teaching and research. There was too much emphasis on research and not enough emphasis or focus on helping professors teach better.

Looking through the back issues now, I’m really surprised, too, how much emphasis there was on women’s leadership and women’s issues. There was also a lot of emphasis on equity issues. In fact, I went back to my first issue as editor and saw “University of Toronto sets up a race relations committee.” So, there was a lot of focus on these issues.

LC: Equity, inclusion and diversity are a big priority for universities right now; and Indigenization and universities’ role in reconciliation. It’s an issue we’ve covered perhaps more than anything else lately. Peggy, what about you? I suppose your tenure corresponds with the big move to online.

PB: The first impetus came with the redesign of the print magazine around 2010. That was huge. We were extremely lucky to convince Underline Studio in Toronto to come on board. After that, we turned to what our online presence should be with a major redesign, the move to online-only articles, our online columnists, the whole careers section and the hiring of a web editor.

LC: And what were some of the issues you were covering when you started out? 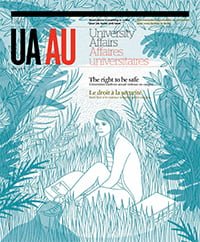 PB: One of the things that was becoming more important at the time I became editor, both to universities and our readers, was definitely graduate studies. The outcomes for graduates, and the structure of PhD programs themselves, became very important and that’s never ended.

We also gradually did more articles on the professoriate and on sessional instructors. I also remember focusing more on people who work at universities – in counselling, student services, marketing and so on. And international education became much bigger. Also, there was all the focus on sexual assault. In preparing for this interview, I was rereading the article, “The right to be safe,” by Rosanna Tamburri and Natalie Samson (now deputy editor at UA), which won a writing award and was about universities confronting sexual violence on campus. That was in 2014, and there were a number of initiatives that had just started.

LC: Reflecting on my own years here, I see many of the same issues. For the writing test that I did as part of my job interview for UA in 2000, I had to do an editorial on the benefits of international students to Canadian campuses – and of course that continues to be an important topic. Another big issue is student mental health, which we cover extensively now.

LC: Which articles that you wrote or assigned over the years are you particularly proud of, or feel were important? 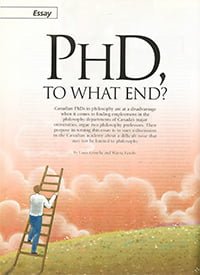 CTF: We did a number of stories about academic freedom and freedom of speech – another topic that comes up now a lot and was a hot issue even back then. It made me realize that, often, when it comes to academic freedom, the people you’re defending aren’t necessarily the people you want to defend, but you have to do it on principle.

PB: Another important article was “PhD: to what end?” (published in 2009), about how graduates of Canadian PhD programs were being overlooked in favour of graduates with foreign credentials for faculty positions at Canada’s larger universities. We knew this was an issue, but it was very politically sensitive. Then, I had a proposal from two professors of philosophy, Louis Groarke (a triplet brother of Trent University president Leo Groarke) and Wayne Fenske, who had done research in their discipline to back it up. That really set things off, and I see there are now something like 50 comments on that article online.

I was also very happy with some of the profiles we did. One was of Constance Backhouse, a professor of law at the University of Ottawa, a feminist and very influential. There was also the one on Natalie Zemon Davis, a historian at U of T, both by writer Diane Peters. There was also the one on Jacques Pépin at Université de Sherbrooke, who cracked the mystery of the origin of AIDS, by Mark Cardwell. Profiles are hard to do, but they are very worthwhile. 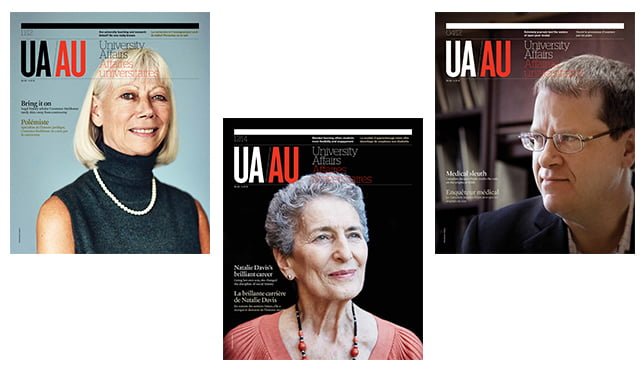 LC: I remember there was an article, just before I started here, about sexual relations between faculty and students that became the authoritative source on the subject for years after, and probably still is.

PB: It was an opinion piece (by Shirley Katz, then an associate to counsel at York University) exploring the legal implications of this, the case law. Her point really was about the power imbalance. If you’re having a sexual relationship, the power is with the professor – until something goes wrong, and then it switches. I think any faculty member who reads that article would definitely think twice about doing it.

CTF: I think a lot of the articles we did really pushed the envelope on what you could report as an association magazine.

PB: Yes, it is unusual for an association magazine to cover such touchy topics – and a real balancing act.

LC: What were some of the big events in Canadian higher education during your tenures? I remember when (then Prime Minister) Jean Chrétien announced the creation of 2,000 Canada Research Chairs in 2000. That was a big deal. And, on a tragic note, well before I was here, there was the shooting at École Polytechnique in 1989 (in which 14 women were killed by a lone gunman).

CTF: I remember, as well, the shootings at Concordia University by Valery Fabrikant (who shot and killed four colleagues in August 1992). It was so strange, because a couple of weeks beforehand, I had received a large envelope addressed to the editor of University Affairs. It was a long rant by a faculty member. Then the news came on about the shooting and I went back to that package sitting on my desk, and indeed the screed that I had received was from Valery Fabrikant, making significant threats. I phoned the police to say I’ve got this on my desk and hadn’t done anything with it, and I felt very guilty about that. They said, it’s OK, you’re not the only one who received it. That made me feel somewhat better.

PB: On a lighter note, remember Y2K? The world was going to end! We had a cover story on it, about all these IT people who had to stay at their universities overnight on December 31, 1999. It’s funny in retrospect, but it was a real concern, and not only for universities, of course.

LC: Let me add one of the big trends that I reported on …

LC: Yes, MOOCs! (Massive open online courses.) That was really one of the stranger things I’ve covered, the hype that surrounded them starting around 2012. It was going to be the end of universities as we knew them!

CTF: We did a lot of stories in the 1990s about technology, and much of it was overhyped. There was one, “Electronic classrooms, the new reality,” and the idea was that all this technology would replace faculty.

LC: Who were some of the big personalities you remember that left an impression? 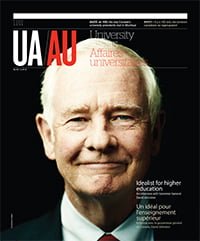 CTF: Rob Prichard, president of the University of Toronto (1990-2000), who read every issue of University Affairs from cover to cover and would phone us up if they weren’t mentioned. But he was very good-natured about it.

PB: In another way, during his time as governor general, David Johnston was very much a presence (he had previously served as principal of McGill University and president of the University of Waterloo). We did a profile on him. That was really enjoyable, meeting him at Rideau Hall. He brought university presidents along with him on his world travels. He was a real believer in higher education.

PB: I used to say to journalist friends, if you were going to cover one industry, higher education is fabulous, because the people are so interesting and know so much about what they’re talking about. And they often have more freedom than many others to speak. It was always interesting, always changing.

CTF: It was a terrific job. We got to write about such interesting issues, and you felt a lot of times that you were really making a difference in higher education, that you were identifying issues early and watching them grow and become more important. It was just a great ride.