In the 1950s, the Prairies were a hub for psychedelic science. Some 60 years later, Canadian researchers are showing a renewed interest in the therapeutic use of psychedelics.
BY KERRY BANKS
JUN 14 2019 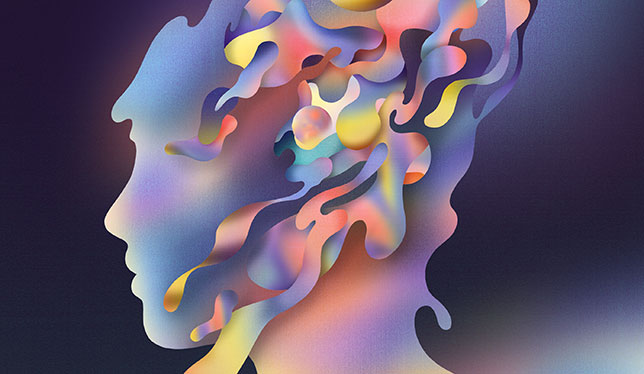 In the 1950s, the Prairies were a hub for psychedelic science. Some 60 years later, Canadian researchers are showing a renewed interest in the therapeutic use of psychedelics.

Psychiatrists in Vancouver will soon begin a phase III clinical trial of MDMA, a hallucinogenic drug commonly known as ecstasy, for patients suffering from post-traumatic stress disorder (PTSD). The treatment consists of three monthly, eight-hour sessions under the influence of MDMA, interspersed by nine 90-minute sessions without it. This work is historically significant, say the researchers involved, because it marks the first time in more than four decades that an illegal psychedelic drug has been clinically tested in Canada.

This double-blind, placebo-controlled study is being run by the British Columbia Centre on Substance Use (BCCSU), a provincial organization with a mandate to develop, evaluate and help implement evidence-based approaches to treat substance use and addiction. Vancouver is one of 16 locations in North America and Israel where teams are working on the same experiment under the guidance of the non-profit Multidisciplinary Association for Psychedelic Studies (MAPS).

A phase III clinical trial is typically the last phase of review a drug undergoes before it is approved for public use. Only 25 to 30 percent of drugs that enter phase III trials pass successfully, but MAPS’ phase II review, which concluded in 2016, produced glowing results. One year after patients were treated with MDMA, 68 percent reported that they no longer experienced symptoms.

Eliminating symptoms entirely would be a huge breakthrough, as PSTD is notoriously difficult to treat, says Mark Haden, executive director of MAPS Canada and an adjunct professor at the University of British Columbia’s School of Population and Public Health. “The traumatic memory of the incident replays like a tape loop in the patient’s mind. MDMA doesn’t eliminate the traumatic memory, but it takes away the emotional impact so that the memory no longer controls a person,” explains Dr. Haden, who hopes to have MDMA approved as a treatment for PTSD by the U.S. Food and Drug Administration and by Health Canada by 2021.

The MDMA work is just one aspect of a recent resurgence of scientific curiosity about the healing properties of psychedelic drugs, an area of investigation that initially showed considerable promise in the 1950s for the treatment of mental health problems and substance abuse, including alcoholism. Much of that pioneering research took place in Saskatchewan at the Weyburn Mental Hospital under the direction of Humphry Osmond, an English psychiatrist, and Abram Hoffer, a Canadian biochemist, who were given great freedom to follow their medical instincts by the government of then-premier Tommy Douglas. 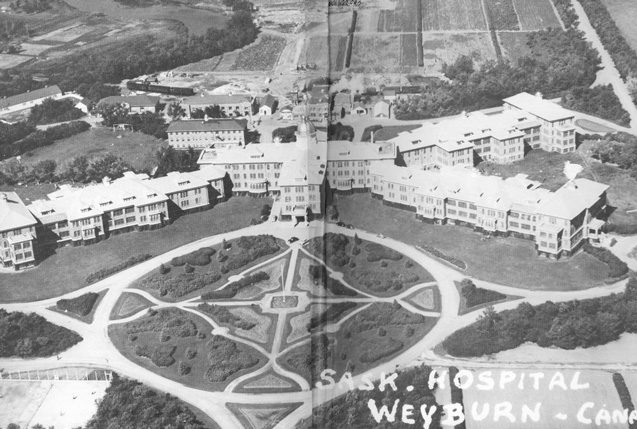 The Weyburn Mental Hospital in Saskatchewan, circa 1955. Courtesy of the Soo Line Historical Museum.

Erika Dyck, who holds the Canada Research Chair in the History of Medicine at the University of Saskatchewan and is the author of the 2008 book Psychedelic Psychiatry: LSD from Clinic to Campus, says Drs. Osmond and Hoffer began experimenting with LSD, mescaline and peyote in order to find an alternative to the brutal methods of electroshock and lobotomy that were often used for treating mental disorders at the time. The quest became surprisingly free-ranging in scope. “Osmond and Hoffer not only treated patients with psychedelics, they also encouraged doctors, nurses and support staff to take the drugs,” says Dr. Dyck. They even had their wives partake, and Dr. Osmond convinced architect Kiyoshi Izumi to ingest LSD several times before he submitted his designs for a new mental hospital in Yorkton, Saskatchewan.

All this exploration of the human psyche came to a sudden halt in the late 1960s when politicians, reacting to the growing recreational use of LSD, peyote and psilocybin, reclassified these substances as dangerous drugs with no medical value.

Today, however, the research is gaining fresh momentum with new investigations of the powers of LSD, psilocybin (the active ingredient in magic mushrooms) and ayahuasca (a South American brew that contains a hallucinogen known as DMT). LSD is being evaluated for its ability to relieve anxiety, psilocybin for the cessation of smoking, the treatment of depression and reducing the fear of death in people with terminal illness, and ayahuasca for its ability to combat depression.

“Psychedelics, under carefully controlled conditions, can create experiences of wonder and awe and a connection to a divine realm that leads to significant behavioural changes,” says Kenneth Tupper, director of implementation and partnerships at BCCSU and, like Dr. Haden, an adjunct professor in the School of Population and Public Health at UBC.

The topic has received mainstream media exposure with the publication of books such as Michael Pollan’s 2018 bestseller, How to Change Your Mind: What the New Science of Psychedelics Teaches Us about Consciousness, Dying, Addiction, Depression, and Transcendence, the global interchange on social media and a growing dissatisfaction with conventional drug therapy.

“It’s a subject that is being increasingly addressed by a number of distinguished people and across many disciplines,” says Brian Rush, a professor in the departments of psychiatry and public health at the University of Toronto and a researcher with the Centre for Addiction and Mental Health. “I was recently invited to give a presentation at a prestigious international conference in Lisbon. The conference had a category for psychedelics. I’d never encountered that before.”

Psychedelics are a class of drugs that affect the brain’s serotonin receptors, triggering a variety of changes in sight, hearing and thought and producing an altered state of consciousness. Drugs commonly included in this category are LSD (acid), psilocybin (magic mushrooms), MDMA (ecstasy) and DMT (dimethyltryptamine). The term “psychedelics” for these substances was coined by psychiatrist Humphry Osmond during a 1956 exchange of letters with writer Aldous Huxley. Dr. Osmond wrote: “To fathom Hell or soar angelic/Just take a pinch of psychedelic.”

But while there is clear evidence of renewed interest in psychedelic drugs, exactly how these compounds affect the biology of the brain is still something of a mystery. The emerging view among neuroscientists is that psychedelics dissolve the barriers in the brain that separate the networks that perform such common functions as vision, movement and hearing. As a result, crosstalk ensues between circuits that normally do not interact. The temporary formation of a more integrated brain may spark the spiritual feelings of “connectedness” often reported by users of these drugs.

While this work is going on, Canadian scientists are exploring other frontiers of the psychedelic spectrum. Adèle Lafrance Robinson, a consulting psychologist and associate professor of psychology at Laurentian University, published a 2017 study that found that ayahuasca may have potential as a therapy for difficult-to-treat eating disorders. Dr. Robinson’s data was gathered by interviewing 16 individuals with a diagnosed eating disorder who had also participated in ayahuasca ceremonies.

Microdosing: the next frontier

Another researcher, Thomas Anderson, a PhD student and cognitive neuroscientist at U of T, has zeroed in on the phenomenon of microdosing, an emerging trend in which people take about one-tenth the dose of LSD or psilocybin typically consumed for recreational use. Because the dose is so low, individuals reportedly experience only subtle changes and can go about their regular day without running the risk of hallucinations. Although there is no established factual evidence that microdosing yields any beneficial effects, many users are convinced that it works like a mega-vitamin pill for the brain, sharpening creativity and cognition, and improving mood.

In 2017, Mr. Anderson and Rotem Petranker, a graduate student of psychology at York University, conducted one of the first scientific investigations of microdosing. Through an anonymous online survey, they queried 909 participants ranging in age from late teens to late 70s from 29 countries about the quantity and frequency of their psychedelic use, their reasons for microdosing, the effect on mood, focus and creativity, and the benefits and drawbacks. The study found that microdosers scored higher on measures of wisdom, open-mindedness and creativity, and lower on neurotic and dysfunctional attitudes.

A few people reported increased anxiety while microdosing, but the most common drawback cited was the illegal status of these drugs, which compels users to obtain them on the black market. “People reported having a hard time finding their dosage or having to deal with drug dealers and being anxious about how they’re partaking in an illegal activity,” says Mr. Petranker.

In the wake of this innovative study, the pair recently launched the University of Toronto Centre for Psychedelic Studies, which they hope will become a hub for North American research into psychedelics. Mr. Anderson says their next project is a randomized, placebo-controlled trial that will involve giving measured doses of psilocybin to 100 participants. They have secured $350,000 in funding from the Canadian charity Singhal Health Foundation and are now completing a Health Canada application that will enable them to acquire a quantity of medical-grade psilocybin. “Our goal,” says Mr. Anderson, “is to use conventional methods and do the best science we can to determine if microdosing actually works.”

Meanwhile, back in Vancouver, Dr. Tupper says that the BCCSU is preparing for its second foray into psychedelics: the use of psilocybin for the treatment of substance-use disorders. But this type of research still faces serious obstacles. The MMDA project took six years and $200,000 simply to get in motion, and the phase III trial is expected to cost about $26 million.

“Funding is a constant headache because we don’t have support from the pharmaceutical industry,” says Dr. Haden. Instead, MAPS’ funding comes from private donors, many of them connected with the tech sector. As Dr. Haden notes, because the therapy and cure for PSTD involves so few doses of MDMA, it doesn’t suit the business model of Big Pharma. “The drug companies want drugs that people have to take on a daily basis, to treat symptoms, not the problem.”

Should this avenue of research continue to produce positive results, however, we may be on the brink of a revolution in mental health care. As the influential Czech psychiatrist Stanislav Grof once stated: “It does not seem to be an exaggeration to say that psychedelics, used responsibly and with proper caution, may become for psychiatry what the microscope is for biology or the telescope is for astronomy.”