Anyone who spends much time on a Canadian university campus, whether faculty, staff or student, is probably familiar with the real-world ramifications of deferred maintenance. Leaky roofs, crumbling foundations, inadequate and out-of-date facilities, from libraries to laboratories. And the problem is growing, fast.

According to the most recent accounting from the Canadian Association of University Business Officers (CAUBO) released last December, Canadian universities’ deferred maintenance backlog now tallies up to more than $17 billion, a 30 per cent increase from 2014.

“We’re now at the point where 36 per cent of deferred maintenance is critical or potentially critical,” says Paul Davidson, president of Universities Canada. “Every university maintains a risk register of its physical assets, and we see that this is not going in the right direction.”

From coast to coast, examples aren’t hard to find. 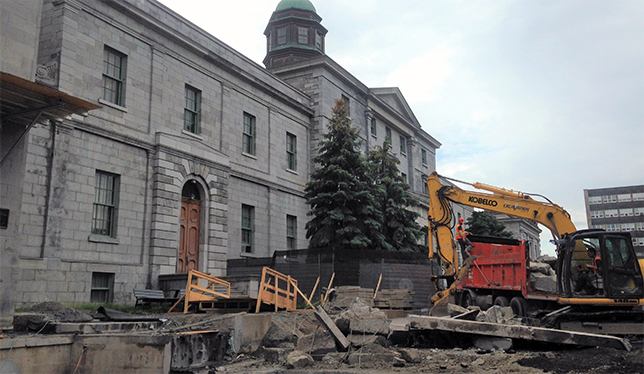 McGill University’s backlog stands at a daunting $1.3 billion. All photos courtesy of McGill.

In 2013, an independent audit for the NSCAD University in Halifax found that the institution’s main campus—a grand but down-at-the-heels row of historic Victorian terraces in the city’s downtown—was “unfit for function” and would require “heroic” efforts to restore for campus use. In 2017, the University of Alberta’s finance committee said that its largest residence hall would need $117 million to avoid “a significant failure of building systems.” And in 2018, a torrent of bricks fell from the 10th story of McGill’s New Residence Hall, crushing a car on the street below. (The residence’s name is a bit of misnomer—it was built in 1977 as a hotel.)

COVID-19 has exacerbated the situation, diverting government funding and reducing enrolment. But Universities Canada is hoping the upcoming federal budget will include new spending to address both the government’s COVID-19 recovery priorities, and help universities tackle their growing backlogs. Mr. Davidson points to the $7 billion worth of shovel-ready projects identified by Universities Canada, which he says are prime opportunities for stimulating economic recovery.

The last major federal funding round for campus infrastructure was in 2016, with the Post-Secondary Institutions Strategic Investment Fund, worth $2 billion for campus modernization. This time around, Mr. Davidson hopes to see new funding recognize deferred maintenance as well. “No philanthropist is putting their name on an HVAC system,” he says. “Federal dollars can make a big difference here, because this is where our needs are so great.”

That reality has made for difficult choices on Canadian campuses, as university administrations work to prioritize repairs.

“We have an exhaustive database of what is our current situation for each roof, building envelope, windows, wall, mechanical, electrical,” says Denis Mondou, McGill University’s associate vice principal of facilities management and ancillary services. “From that we can assess, ‘this needs immediate attention, that requires attention soon.’ But how do you set priorities from there? That’s a work in progress.”

McGill’s backlog stands at a daunting $1.3 billion, so priority-setting is important. Building envelopes, says Mondou, come first and foremost. “A leaky roof is not just the roof but everything beneath it, equipment, electrical, other systems,” he says.

Beyond that, Mr. Mondou explains that the approach to maintenance focuses on making sure maintenance projects address multiple concerns at once. In practice, that can mean certain repairs are deferred until an even larger overhaul is ready to go forward—for example, an aging HVAC system may see its lifespan stretched out just a little longer to coordinate with a larger facility renewal.

On the east coast, the maintenance deficit sits at around $2 billion, says Peter Halpin, executive director of the Association of Atlantic Universities. But there are dozens of shovel-ready projects ready to address that. They include replacing inefficient library chillers at St. Francis Xavier University with a geothermal system and replacing a library at the University of New Brunswick’s Saint John campus, which will reduce deferred maintenance costs by an estimated 30 per cent. 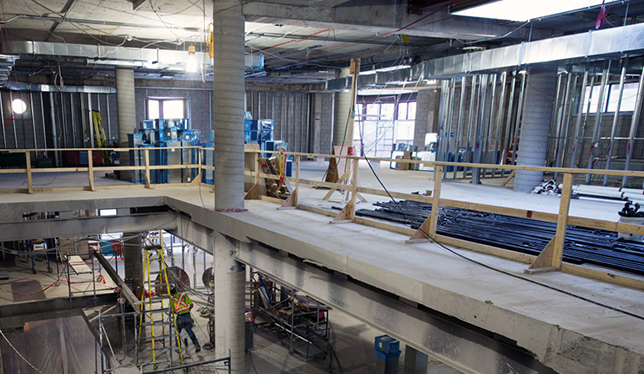 By way of example, Mr. Halpin recalls a recent retrofit of Acadia University’s science building, which had barely changed in decades. “A federal aide, who was a graduate of Acadia, came to make the funding announcement, and he said his jaw dropped when he saw that the labs he’d been a student in 30 years earlier were identical … that really showed for him the importance of this.”

Funding shortages mean universities have long had to make creative use of other revenue sources. For example, at the University of Guelph, the student union in 2007 established a $10-per-semester student fee, to be invested in energy-retrofit projects. The fee was matched by the university, dollar-for-dollar, and was critical to the Green Gryphon initiative, a $26.2 million energy conservation project at the Green Gryphons Athletics Centre.

Harry Bakker, U of G’s associate vice-president of physical resources, says that such creative arrangements are useful, but steady, reliable funding is still vital. The Ontario government has recently committed $809 million to universities over the next 10 years, as part of its Facilities Renewal Program. While it will address only a fraction of the need, says Mr. Bakker, it’s a marked improvement over unpredictable annual funding announcements.

“That 10-year commitment allows us to do some increased planning,” he says. “It just needs to be bigger.”

Like Mr. Davidson, Mr. Bakker hopes to see new federal funding soon. The U of G also has several shovel-ready projects that aim to marry maintenance with federal priorities around accessibility and sustainability, including a $5 million project to renew the university’s 50-year-old Arboretum Centre, turning it into a carbon-neutral building.

As the saying goes, the greenest building is the one that already exists.

“In previous rounds of funding there may have been a bias to new builds,” says Mr. Davidson. “We’re hoping this will be more holistic. We’ve got to become smarter about how we use our built environment, so that it makes good economic and environmental sense—and that’s an expectation of students today, so we have to deliver on it.”