‘Again, the North loses out’: the rifts and ripple effects from shuttering Laurentian’s midwifery program

‘Had the program not been offered in … northern Ontario, we would not have become midwives,’ says one Laurentian graduate.

On April 12, the small, close-knit midwifery community at Laurentian University was shocked when the university announced the dissolution of the program, along with almost 70 other programs, in English and French, and terminated about 100 faculty positions in an attempt to bring its financial issues under control. The news was shocking not just for the magnitude of the cuts, but because midwifery at Laurentian was always operating at capacity and was funded by $1 million annually from the provincial government.

According to faculty, students and graduates, the program is also key to ensuring the delivery of essential health-care services in an area of the province that’s often overlooked. Most of the midwives practicing in northern Ontario are from the region and attended Laurentian, says Kirsty Bourret, a former faculty member.

She said faculty and students are concerned there will no longer be a bilingual and northern midwifery program in the province, despite assurances by Ross Romano, the provincial minister of colleges and universities, who said weeks after the cuts that it’s his government’s priority to ensure there continues to be a northern and bilingual midwifery program option in Ontario. 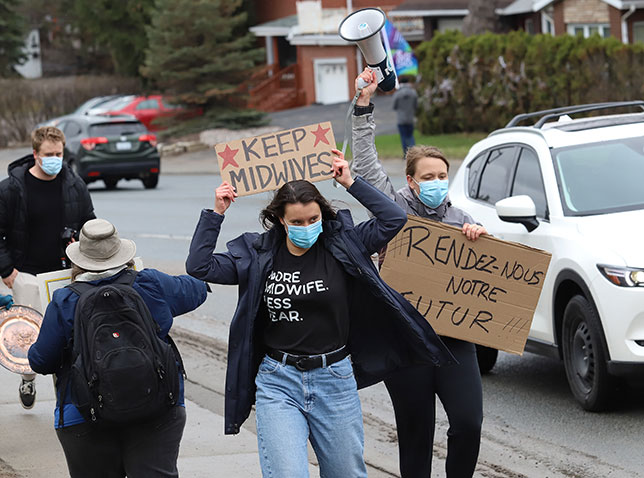 Current students will be able to continue their studies at either McMaster University or Ryerson University, where Ontario’s other midwifery programs are located. However, former faculty members “can’t wait around” for the province to open another midwifery program in northern Ontario, Dr. Bourret says. “We all need to have careers … and right now, McMaster and Ryerson, even though they’re taking on students, they are not taking faculty.” Dr. Bourret is an adjunct scientist at the McMaster Midwifery Research Centre and will be starting a postdoc fellowship soon, so instead of teaching, she will focus on research. “I’m going to be extending my research and if I get a better job offer somewhere else in the world, I’ll just go,” she says. “I’m really sad, but I need to move on.”

Kim Cloutier Holtz understands the need for midwifery care in northern Ontario. She was “born and bred” in the region and attended the midwifery program at Laurentian. As a practicing midwife in New Liskeard, about a two hour drive north of North Bay, she sees first-hand how midwifery care in the region is populated by graduates of Laurentian. “I look at Timmins, Hearst, Kenora, Thunder Bay … Sudbury and North Bay. It’s Laurentian grads that are filling the positions in the North.”

Read also: Call the midwife, get on a waitlist

As a francophone, Ms. Cloutier Holtz chose Laurentian because she wanted to pursue university studies in her language, and not attend an English program far from home. The sole French-language midwifery program in Canada isn’t an option for French-speaking Ontarians; the program is at the Université du Québec à Trois-Rivières and its graduates can only practice in Quebec. “I know for myself, and many of my colleagues, we’ve all said [that] had the program not been offered in our communities, in Sudbury in northern Ontario, we would not have become midwives. We wouldn’t be here today.”

There are many reasons why it’s difficult for prospective students from northern parts of the province to travel south for education and it’s very unlikely someone from southern Ontario would pick up their lives and move to Timmins, Cochrane or Iroquois Falls for a career, Ms. Cloutier Holtz suggests. There will be huge repercussions for northern Ontario — “an area that’s already low on services” — if a midwifery program isn’t brought back to the region.

Chantal Longobardi, who worked as a doula in Alberta before moving to Sudbury with her young family, has one more year left to obtain her midwifery degree. She’s committed to completing it, although far from pleased to not be able to finish at Laurentian. She says midwifery at Laurentian, and the university itself, is a small community. “Everyone knows each other, so [cutting programs] really creates a lot of rifts and ripple effects,” she says.

It’s been a challenging year for her and her classmates. In the early stages of the pandemic, student placements were put on hold. The placements were later given the go-ahead, with extra precautionary measures in place, but to graduate on time Ms. Longobardi and her cohort had to go from one placement to the next, without any breaks. For her, this meant weeks away from her two children, without being able to visit due to COVID-19 restrictions. Her classmates were also unable to support each other in person. And now, after a difficult year, they’ve been split apart.

Ms. Longobardi was intentional about attending Laurentian – not only is she a French speaker, but as a Métis woman she wanted to be able to connect to the land, culture and language of her Anishinaabe ancestors in her midwifery practice. “The North is a great opportunity,” she says. “Obviously, there’s a lack of accessibility to reproductive choice and services [in northern Ontario], especially for Indigenous women and racialized women and the LGBTQ [community] … [but midwives] have an understanding about what good care is,” Ms. Longobardi adds. “So, to lose that in the North is especially difficult, because what does that mean, for the North? Again, the North loses out, right? So that’s a really hard piece to deal with.”

“You invest so much in midwifery. It’s not a profession that you [just] come into; you need to have a calling to it because the demands are so, so great,” Ms. Longobardi says. The profession constantly requires advocacy – advocacy for women’s rights, advocacy for midwives’ rights, advocacy within the medical field, she adds. “As far as my choice [of attending McMaster or Ryerson], I’m just going to have to keep moving. I have this calling and I’m not going to stop.”