Dozens of students, professors and researchers from universities across the country have been identified among the 176 victims.

Editor’s note: this story has been updated.

Canada’s university community is stunned and in mourning as the scope of the tragedy becomes clear from the crash of a Ukraine International Airlines flight outside of Tehran on January 8. Dozens of students, professors and researchers from at least 18 universities from Victoria to Halifax have been identified among the victims.

All 176 passengers and crew members on Ukraine International Airlines Flight 752 en route to Kyiv were killed after the aircraft crashed just minutes after takeoff at Imam Khomeini International Airport. Some 138 of those passengers were ultimately travelling to Canada. At least 40 of the victims were active in Canada’s university and research communities. Many were international students returning to school after spending the holiday break in Iran.

In a note to university presidents sent today, Paul Davidson, president of Universities Canada, wrote: “I know many of your universities have lost students, faculty, researchers, graduates. The loss of any life is tragic, but the loss of so many bright, talented and engaged members of the Canadian academic community at once is utterly devastating.” 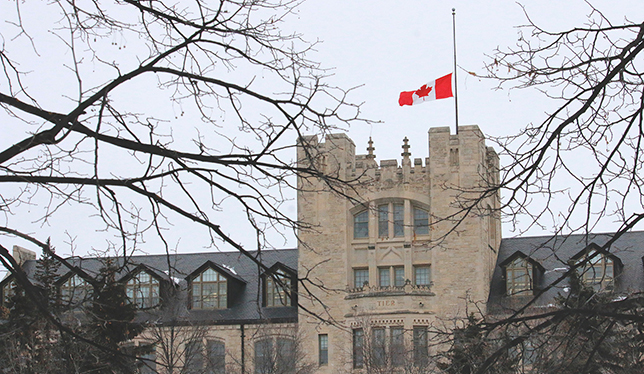 The University of Windsor confirmed “at least five individuals who appear on Ukrainian International Airlines’ Flight PS752 passenger list are members of the University of Windsor student and research community.” CBC has reported that those victims connected to the university are Samira Bashiri, an Iranian-trained veterinarian working in a lab at the university; her husband, Hamid Setarah Kokab, a PhD student in mechanical engineering; Zahra Naghibi, a PhD student in civil engineering who had been working with the turbulence and energy lab (her spouse Mohammad Abbaspour Ghadi also died); and Pedram Jadidi, a PhD student in civil engineering specializing in coastal and offshore engineering.

University of Toronto president Meric Gertler issued a statement acknowledging that “several U of T students” were among the dead. CBC has identified some of these students: Mojtaba Abbasnezhad, a first-year international PhD student in electrical engineering and teaching assistant; Mohammad Salehe, a PhD student in computer systems technology and teaching assistant; Zeynab Asadi Lari, an honours BSc student at the University of Toronto Mississauga who’d previously studied at the University of British Columbia; Mohammad Hossein Asadi Lari, an MD/PhD student who’d previously studied at UBC. The names of two more students have since been added: Mohammad Amin Beiruti and Mohammad Amin Jebelli.

The university held a vigil for the students the day of the crash. Jina Kum, president of the Society of Graduate Students, spoke at the memorial. “The loss of these graduate students is significant not only to the fields in which they actively contributed, but also the Western community will feel their absence in the days and years to come,” she said.

The CBC notes that some 30 victims were Edmonton residents, most with ties to the University of Alberta. Among them: Mojgan Daneshmand, an associate professor in electrical and computer engineering who held the Canada Research Chair in Radio Frequency Microsystems for Communication and Sensing; her husband Pedram Mousavi, a professor of mechanical engineering who held the NSERC Industrial Research Chair in Intelligent Integrated Sensors and Antennas and who’d received his PhD and MSc from the University of Manitoba; newlyweds Arash Pourzarabi and Pouneh Gorji, both master’s students in computer science; medical student Saba Saadat (and her sister Sara Saadat, who graduated from clinical psychology in 2019); Nasim Rahmanifar, a master’s student in mechanical engineering; Elnaz Nabiyi, a PhD student in the department of accounting, operations and information systems; and Amir Saeedinia, a PhD student in mechanical engineering.

U of A president David Turpin said in a statement: “This is a devastating loss for the University of Alberta. Ours is a closely interconnected community, and we grieve with everyone touched by this terrible loss – friends, classmates, roommates, professors, students, mentors and colleagues.”

The University of Ottawa noted that three of its students were reportedly among the victims and that it was “working to confirm their identities.” According to a subsequent U of Ottawa statement, the students were Mehraban Badiei Ardestani, an undergraduate student enrolled in the Interdisciplinary School of Health Sciences; Alma Oladi, a graduate student completing a PhD in mathematics; and Saeed Kadkhodazadeh Kashani, a PhD student in chemistry. The Iranian Student Association of the University of Ottawa, the Nowruz Student Association and the university will host a memorial on January 10.

Université du Québec’s École de technologie supérieure announced “with great sadness” that it was notified that two of its PhD graduates were among the dead: Aida Farzaneh, a lecturer in the department of construction engineering at ÉTS, and her husband, Arvin Morattab, a 2018 PhD graduate.

At Dalhousie University, vice-president, academic, Teri Balser said in a statement, “we are devastated to have learned of members of the Dalhousie community among the deceased.” According to CBC, engineering student Masoumeh (Masi) Ghavi and her younger sister Mandieh Ghavi, an incoming student, were among the passengers.

Saint Mary’s University confirmed that Maryam Malek and Fatemeh Mahmoodi, both students in its master of finance program, were listed as among the passengers.

McMaster University stated that two PhD students in the faculty of engineering, Iman Aghabali and Mehdi Eshaghian, were both on the flight. The CBC notes that the two worked in McMaster’s automotive resource centre.

The University of Victoria reports that a first-year student, Roja Omidbakhsh, registered in the Gustavson School of Business, was among the victims. “It is always a profound loss for the entire community when we lose someone, and our hearts and thoughts go out to Roja’s loved ones,” said UVic president Jamie Cassels in a statement.

Carleton University identified one current student among the victims: Fareed Arasteh, a PhD student in biology specializing in molecular genetics and a research assistant.

York University confirmed one of its students was among the passengers. The Toronto Star identifies her as Sadaf Hajiaghavand, a second-year human resources student at the university.

Razgar Rahimi, a sessional instructor with the faculty of engineering and applied science at Ontario Tech University, was among the dead, according to local media reports. Dr. Rahimi received a PhD in electrical and computer engineering at the university in 2018.

The University of Manitoba named Forough Khadem, who graduated from the university in 2016 with a PhD in immunology, as one of the victims. Dr. Khadem had been a business development specialist at Mitacs for three years. The university also said it was aware of reports that students had also been among the passengers.

And, Queen’s University principal Patrick Deane confirmed in a tweet that Queen’s student Amir Moradi died in the crash.

Likewise, McGill University principal Suzanne Fortier announced that “I am saddened to report that a McGill student died in the tragedy.”

On January 9, Prime Minister Justin Trudeau said new intelligence suggested the plane may have been unintentionally shot down by an Iranian missile.

Details about the crash and its victims will continue to come out over the coming days and weeks.