Barbie’s You Can Be Anything campaign matches girls up with female mentors excelling in male-dominated fields.

Girls everywhere have been fans of Mattel’s iconic Barbie doll since the toy debuted in 1959. Victoria Kaspi, an astrophysicist at McGill University, was no different; she loved Barbie’s feminine clothing when she was a child, and played with the doll as much as she played with her Lego and math toys.

Barbie didn’t serve as an inspiration for the career Dr. Kaspi has today. But Mattel’s You Can Be Anything campaign, in partnership with National Geographic, could be the inspiration some girls need to see themselves in male-dominated fields like astronomy. The campaign, which is in its fourth year, included the launch of five new Barbie dolls in careers where women are underrepresented, and a contest that sends girls from across Canada to spend a day with female mentors who work in those fields – all in an effort to encourage girls to believe they can “be anything.” This year’s dolls represent the fields of astrophysics, polar marine biology, wildlife conservation, entomology and wildlife photojournalism. Dr. Kaspi, one of the mentors chosen for 2019, spent a day with her six-year-old mentee in August.

“Barbie dolls are very popular among girls,” Dr. Kaspi says. “Getting these kind of careers to be normalized, to seem normal to little girls is one of the many things I think is important to do to increase the number of women in STEM.”

The two visited Mont Megantic Observatory and the Astrolab museum near Sherbrooke, Quebec, and discussed astronomy, how astronomical equipment works and why understanding weather patterns is important for stargazing. Dr. Kaspi says the conversation went on naturally, as if the experience of women and girls together discussing the details of scientific research was a common experience. “It was all presented in a positive light,” Dr. Kaspi says. She adds that her mentee “was really fun to be with, curious, inquisitive, a little shy.” 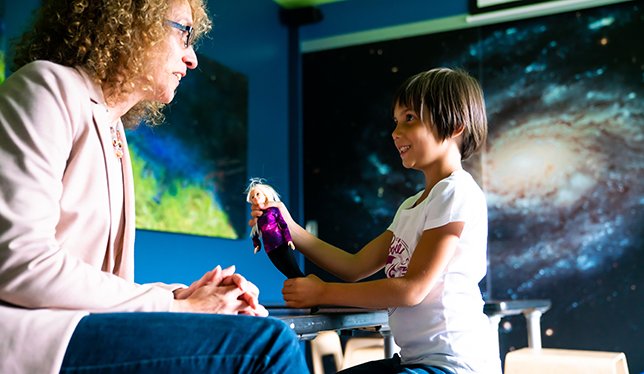 Dr. Kaspi says there are intangible barriers that make it harder for women in science. “You have to prove yourself a little bit more. You don’t quite fit the mold,” she says. “To make your point in a crowd, or have your expertise trusted and believed, you have to go the extra mile to be accepted as an authority.” She says the campaign isn’t the “one silver bullet” that will solve the problem of underrepresentation of women in careers like hers, but it’s a step forward.

Sara Iverson, a professor at Dalhousie University, shared her marine biology expertise with an 11-year-old mentee as part of the campaign in July. They tagged sharks in the Atlantic Ocean and visited Dr. Iverson’s lab to meet graduate students and learn about the marine biology work the students do. Although the water was rough and “half the boat crew got sick, including the little girl,” Dr. Iverson says her mentee is a huge fan of sharks and was ultimately “thrilled” by the experience.

It’s no secret Barbie has faced criticism for presenting an unrealistic body image and beauty standards. And over the years, the doll’s interests and career choices have tended to fields traditionally associated with women – she’s been a teacher, ballerina, babysitter and “baby doctor,” just to name a few. But “the fact that Mattel moved to creating dolls with different body types and different skin colours, and really trying to embrace different kinds of careers, I think that’s a really good message,” Dr. Iverson says.

“My opinion is simply that little girls are going to play with Barbie,” she adds. “What better way to play with them than to use it to imagine a really cool career? I think outreach and education and messaging about imagining what you can do can come in all sorts of forms. And play is one of those forms.”