The new network of regional centers of excellence comes on the heels of Canada’s first national accessibility law.

Carleton University aims to draw on the power of partnerships to advance accessibility for people with disabilities through the recently announced Canadian Accessibility Network. “We are pursuing to establish Carleton as a centre of excellence in accessibility,” said Dr. Boris Vukovic, director of Carleton’s READ (Research, Education, Accessibility and Design) Initiative, where the network will be headquartered. Dr. Vukovic said they plan to create a network of regional centers of excellence across the country, drawing on “Carleton’s history of collaborating with partners within and outside of Carleton, locally, nationally and even internationally on accessibility related projects.”

The network was announced in June, following the passing of the first national accessibility law in Canada, which includes new rules concerning accessibility for the Government of Canada and organizations under its jurisdiction. “Accessibility is increasingly becoming a priority, obviously with the federal Bill C-81 that just came into force as the Accessible Canada Act, but within Carleton as well,” said Dr. Vukovic. 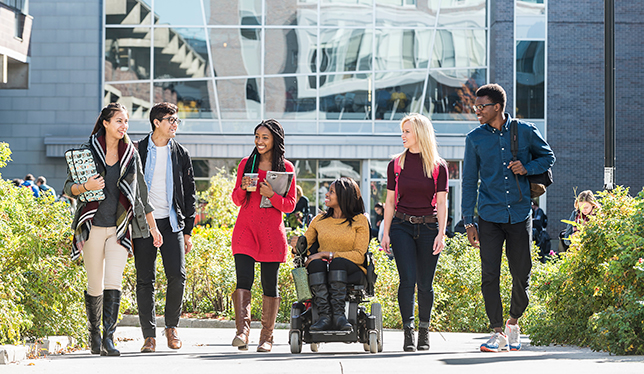 Carleton will launch a network of excellence in accessibility for people with disabilities. Photo courtesy of Carleton University.

He noted that for many years, accessibility efforts on campus were predominantly driven by the Paul Menton Centre, Carleton’s centre for coordinating academic accommodations and support services for students with disabilities, but “now, we have the support of our top administration. The vice-president and the president are supporting the READ Initiative and other efforts, including the Canadian Accessibility Network.”

The network is still in its early stages, with current priorities being to develop a governance structure, identify funding opportunities and secure partnerships, said Dr. Vukovic. While hesitant to identify any particular partnerships until they are formalized, he said that they are currently working on memorandums of understanding with 50 partners across different sectors, including postsecondary institutions, government departments, community organizations and industry.

Five areas of focus are expected to guide the network’s activities, including: research, design and innovation; education and training; policy; employment; and community engagement. “When you look at those five domains, they are very broad,” said Dr. Vukovic. “Within each of those, we have specific activity areas.” He noted that some of those activities will likely address issues like the transition from postsecondary education to employment, assistive technologies for rehabilitation, and the monitoring and evaluation of  accessibility policies and standards.

Dr. Vukovic, said the network ultimately aims to help make progress on issues that broadly affect people with disabilities. “At the highest level, it would be to help our society be inclusive by design. By that, I mean that accessibility is a part of everything that we do and every time we approach an issue, every time we are designing a service product or an environment, we consider accessibility as a key element.”

An official launch for the network is planned later this year.