“We’re witnessing the disappearance of history,” says one expert.

“We’re witnessing the disappearance of history,” says University of Toronto archeology professor Max Friesen, describing the destructive effects of climate change on archeological sites in Canada’s North. Dr. Friesen, who has done extensive fieldwork around Cambridge Bay in Nunavut and the Mackenzie Delta region of the Northwest Territories, says that the accelerated pace of thawing and coastal erosion is creating a knock-on crisis.

As the top layers of permafrost melt, buried treasures are being exposed. “We’re finding perfectly preserved artifacts, including animal skins, bones, sinew and other organic materials that are thousands of years old,” says Dr. Friesen. “These are the sorts of artifacts you don’t find anywhere else in the world.”

Although this presents a windfall for archeologists, it also carries a heavy price, as the onset of warmer temperatures is uncovering more artifacts than they can cope with. “It’s both a blessing and a curse,” admits Dr. Friesen. “Now that they are being exposed to the elements, these once pristine sites are starting to decompose. The repercussions are pretty dire.” 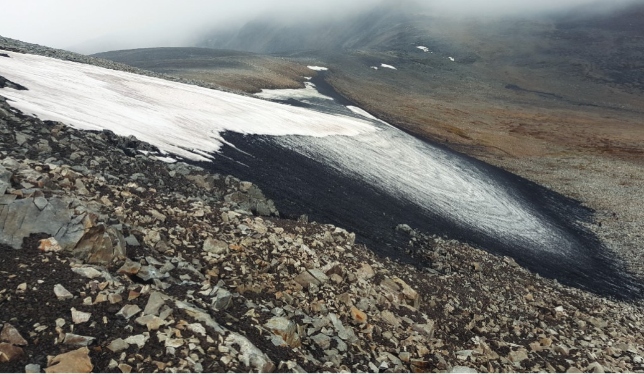 Ice patches like this one in the Yukon, once stable, are now melting, revealing large numbers of artefacts. Photo courtesy of the Yukon Government.

Meanwhile, coastal erosion is advancing due to rising sea levels, increased storm activity and a shrinking of the ring of protective sea ice. This erosion poses a direct threat for archeologists because most Indigenous settlements were located on the coast. “We now have huge sites literally falling into the ocean,” says Dr. Friesen, noting the example of the pre-contact Inuit village of Nuvugaq on the Mackenzie River delta, where 17 large sod houses and a communal structure have been totally washed away.

Dr. Friesen’s work in the Mackenzie Delta is proceeding in partnership with Indigenous groups, who advise the archeologists on the best locations for historic sites. “Climate change is a huge concern for Indigenous communities because they are living on a daily basis with the impact,” says Dr. Friesen.

Climate change is also uncovering archeological treasures in high-altitude ice fields that are uniquely suited to preserving organic material. Unlike glaciers that move and slowly grind down any artifacts trapped in them, the mountainside ice patches tend to remain stable. Or, at least they did until gradual warming began to take hold.

Since 1997, more than 200 well-preserved artifacts have been recovered from melting alpine ice patches, primarily in the southern Yukon but also in the Northwest Territories. The discoveries include a 9,300-year-old wooden hunting dart, copper-bladed arrows with intact feathers dating back 850 years, a 1,000-year-old snare to catch ground squirrels, and a 1,400-year-old moccasin. 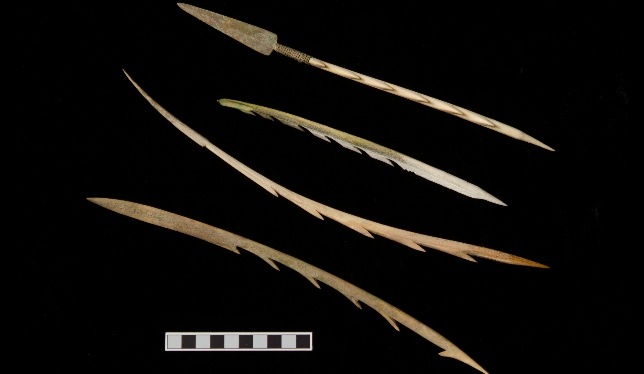 An assortment of traditional big-game-hunting antler points, include a 900-year-old barbed arrow with a unique copper end blade (top), collected from melting ice patches in the Yukon. Photo courtesy of Yukon Government.

These ice patches are rife with weaponry because caribou and reindeer would gather here in summer to seek refuge from heat and insects, and Indigenous people would follow the animals and hunt them there, explains Christian Thomas, special projects archeologist with the Yukon Government. “These finds have allowed us to construct a lot of details about ancient hunting technology,” says Mr. Thomas, who notes that the work in the Yukon is being conducted in partnership with six different First Nations.

Although there is now monitoring of some ice patch sites, archeologists can’t know what else they may be missing as the melting continues. From an ecological perspective there is also reason for concern. “The ice patches are part of an ecosystem that is degrading. It’s becoming harder for caribou to maintain their health and thermoregulate their bodies. Even the 10,000-year-old ice patches are withering away. It’s most alarming,” says Mr. Thomas. 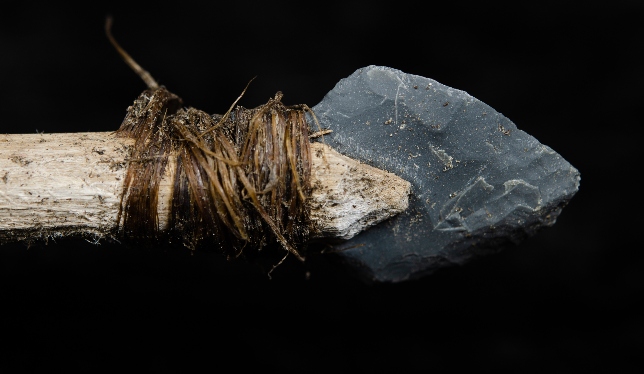 Close-up of an obsidian projectile point tied to the end of a 6,000-year-old throwing dart that melted out of an ice patch near Alligator Lake in the traditional territory of the Carcross/Tagish and the Kwanlin Dun First Nations. Photo courtesy of the Yukon Government.

Robert Park, an archeological anthropologist at the University of Waterloo who has spent much of his career unraveling the secrets of how communities existed in the harsh Arctic climate, says that the glut of artifacts emerging from the northern deep freeze has created a serious storage problem. “All the excavated material needs to be conserved and curated and properly stored in a museum. We don’t have the trained personnel or space to handle it all,” says Dr. Park, who notes that Nunavut’s archive of 140,000 items is now being stored at the Canadian Museum of History in Gatineau, Quebec.

Conducting archeological work in Arctic regions is especially challenging because of the logistics and distances involved, the fuel and field costs and the shortness of the excavation season. Given these complications, Dr. Friesen believes that only a concerted national response working in conjunction with Indigenous groups can hope to address the problem.

“It’s difficult to determine which areas are the most important to dig and also which are most at risk. There are a couple of sites where I thought we might be digging the next couple years and when I’ve gone and looked closely, I couldn’t find any parts of them that are even worth excavating,” says Dr. Friesen. “The richest areas are gone. It’s really a catastrophe. All we can do now is try to salvage the artifacts with the highest quality.”