Deep and meaningful engagement between Indigenous and non-Indigenous people must be part of a university’s reconciliation efforts, participants at the fifth annual Building Reconciliation Forum heard. The forum, which took place at Algoma University on the site of the former Shingwauk Residential School in Sault Ste. Marie, Ontario, was co-hosted by Algoma, Shingwauk Kinoomaage Gamig, Cape Breton University, Nipissing University and the University of Northern British Columbia on October 9 and 10. Forum speakers frequently touched on the message that efforts to heal from the harm caused by Canada’s Indian residential school system need to go beyond hiring Indigenous faculty members or recruiting Indigenous students –  institutions and their leaders must build connections to Indigenous communities and learn from their mistakes along the way.

That message was central to a workshop hosted by the University of the Fraser Valley. The B.C. university began its efforts to engage the local Stó:lō community with the creation of an Aboriginal community council in the late ’90s, and administrators at the university admit those efforts were not without their faults. “The council was based on the premise of integrating Indigenous students into the university, not on the premise that the university as a Canadian educational institution was implicated in the history of colonialism and the abuse of Indigenous students, and therefore that the university itself needed a radical transformation,” said Eric Davis, special advisor to the UFV president. “We did not reach the realization that Indigenization and reconciliation depend on those who work in and run universities unlearning what a university is and does.” Meaningful changes took an “education of the hearts” of senior administrators and staff, which came after a number of key events and developments at the university, he added.

The university built a new space on its Chilliwack campus in 2012, called the Gathering Place, modeled after a Stó:lō longhouse, following consultations with Indigenous leaders to ensure it reflected Stó:lō culture accurately and with respect. The university has held classes on Stó:lō teachings and ceremony that, while facilitated by faculty, were taught by Indigenous leaders. There was an Indian residential school day of learning on campus, coinciding with Truth and Reconciliation Commission events in Vancouver, that brought in a number of survivors to tell their stories. The university has also done away with that original Aboriginal community council, and has instead created an Indigenization committee as part of the senate.

Peter Geller, UFV’s vice-provost and vice-president, academic, said the Indigenization committee is the first, and still the only, senate committee that has members from outside the university. He said it aligns with what the university is doing academically, “really wanting to open UFV to the community and hopefully in that way make the community more involved with the university.” He acknowledged that the university has come a long way in deepening its ties with the Indigenous community whose traditional lands its buildings sit on, but said there is still a lot of work to do. “I think we have to be honest and acknowledge there’s resistance. Not everybody would understand why [we have] a standing committee. Why have people from outside the university. … Why do this work? But I also see lots of support.” 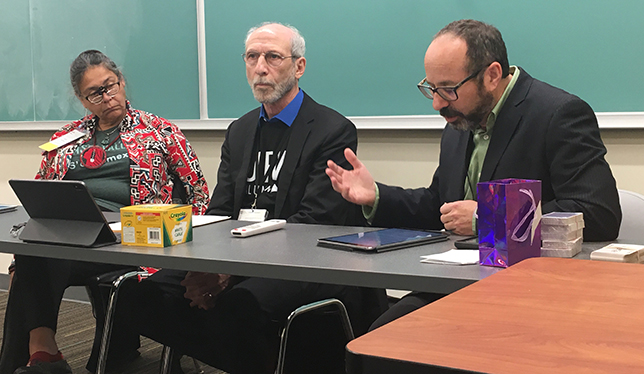 At Cape Breton University, meaningful collaboration has meant consulting with community leaders, elders and young people to help determine a university’s direction and develop programs on Indigenous issues. In a concurrent workshop, Stephen Augustine, associate vice-president, Indigenous affairs and Unama’ki College, spoke about CBU programs and convocation ceremonies held on reserve, with parents, grandparents and the Mi’kmaq chief participating in the ceremony. “It’s really meaningful for the students,” he said, emphasizing that education should be brought to the community. “The community should be part of the university, and vice versa. The university should be part of the community.”

More than 250 participants from postsecondary institutions, Indigenous communities and the higher education sector attended this year’s forum, which included 13 concurrent workshops by universities from across the country as well as several panels, presentations and meetings. Université Laval and the Université du Québec network will co-host the event in 2020.