The organization was founded in 2007 by retired Canadian Forces General Roméo Dallaire.

A research and training initiative based at Dalhousie University is leading international efforts to prevent children from being recruited as soldiers in war-ravaged countries such as South Sudan, Sierra Leone, Rwanda, Afghanistan and Syria. Since the Roméo Dallaire Child Soldiers Initiative was founded eponymously in 2007 by the former Canadian Forces Lieutenant-General, it has made many inroads with global partners towards the goal of eradicating the use and recruitment of children as soldiers in war.

General Dallaire was most notably the commander of the UN mission in Rwanda during the genocide there in 1994. He later became an advocate for veterans struggling with post-traumatic stress disorder, but now says he has committed “the rest of his life” to the child soldier initiative. Part of that effort includes educating the public on the varied and insidious ways children can become involved in armed conflict.

The problem is of deep concern to global human-rights advocates. According to February 2019 figures provided by Child Soldiers International, the number of child soldiers worldwide has risen 159 percent since 2012, with close to 30,000 verified cases of child recruitment in 17 countries. Reported instances of sexual violence towards children in war have also increased in that time by 40 percent.

“Most Canadians probably think of child soldiers being in combat, but we have to understand that they play multiple roles,” said the initiative’s executive director Shelly Whitman in an interview from Halifax, just after her return from one of many trips to South Sudan.

The list of these roles is long and disturbing: children are called upon to work as messengers, cooks, decoys, “bush wives” or sex slaves, suicide bombers, and “cyber warriors” shutting down internet systems and gaining security information for military purposes. “We don’t talk enough about all of these entry points for supporting prevention,” she said.

General Dallaire and Dr. Whitman spoke of their work before a standing committee of the Department of National Defence in Ottawa last fall. Both support the evolution of Canada’s international military strategy into one that proactively helps to prevent the kinds of conditions in which wars arise and, in particular, the conditions that allow children to be exploited as part of war efforts. Evidence they and their colleagues have gathered suggests that such conditions are early warning signs of the risk of large-scale atrocities being committed. 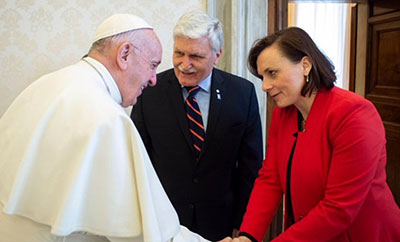 In 2017, the organization launched the Vancouver Principles, a set of goals and guidelines for international peacekeepers to adhere to. Fifty-five countries initially signed on to the principles, which include the proper training of peacekeepers, monitoring and reporting on violations of laws sanctioning recruitment of children in war, and ensuring that women’s contributions to the protection and care of children in war are valued. Today, the number of endorsing countries has risen to 71.

The initiative also created the first training manual and courses for Canadian and international armed forces and police officers learning how to deal with child soldiers whom they may encounter in combat situations, and how to help prevent them from becoming soldiers in the first place.

Training includes the “Wounded Warriors” summer course at Dalhousie to prepare military and police veterans to go into war zones and train others on the ground. The course also aims to help troops prepare for the moral dilemmas they may face when encountering child soldiers in combat and other situations.

“The military is starting to recognize that peacekeepers face these mental-health challenges, but more work is needed,” said Dr. Whitman. “The reality is that facing child soldiers can have a traumatic impact. When [the peacekeepers] get home, they have the hardest time interacting with their own children.”

The organization’s list of publications is growing, and Dalhousie students are getting the opportunity to participate in the training and support of Canadian and international armed forces members, at home and abroad.

“There’s no doubt the relationship is mutually beneficial,” said David Black, chair of the university’s department of political science, pointing to the initiative’s growing body of research, the educational opportunities for students, and the enrichment the campus and community gets from outreach efforts that raise awareness of the issue, and the role academics can play in Canada’s peacekeeping. The initiative has had “an incredible run of success,” he said.

The work is being widely recognized. Dr. Whitman received a Women of Excellence award from the Canadian Progress Club in 2014 and, in 2017, a Voices of Justice award from Human Rights Watch.

“I have a tremendous admiration for their work. I think it must be a Sisyphean uphill battle at times,” said Dr. Black. Having someone on board who is as widely known and respected as Romeo Dallaire is a great asset for gaining access to key military players in Canada and around the world, he noted, but it also means there are high expectations to live up to. While the initiative has a stable home at Dalhousie, with access to the university infrastructure and support, it is a self-funded resource with a small staff, deriving its funding from a patchwork of contributions from government, philanthropic foundations, contracts and fundraising.

Despite the wearying work, tangible successes are gratifying, and keep the team going, says Dr. Whitman. “I see the changes when I go into the field, and it brings me great joy.” She points to the work of an office with two staff members that opened in April 2018 in Juba, South Sudan, with support from UNICEF.

“There are military commanders who know that the recruitment and use of child soldiers is wrong. We met with a commander to discuss the fact that children shouldn’t be doing any war work. There are laws against it. As a result, when children come to him, he actively tells them ‘no.’” The commander now calls a civilian child protection adviser to report the situation, in keeping with a UN security council resolution that mandates monitoring “grave violations” against children, including “recruitment and use of children by armed forces and armed groups.”

Experiences like this suggest to Dr. Whitman and her colleagues that progress is happening. “I have a sincere hope and belief that we are changing people’s attitudes and behaviour on the ground,” said Dr. Whitman. “The dialogue we’ve started has momentum.”