“We Are Hockey” celebrates hockey players of colour and their impact on the sport in Canada.

The story of hockey in Canada is well cemented in the dominant popular imaginary: kids, skating on backyard ice rinks, grow up dreaming of playing in the NHL. It’s a narrative that gets to the heart of what many associate with Canada, and that many Canadians identify with: it’s a story of determination, community and a love of the cold. But, despite Canada’s diverse population, young people of colour often struggle to see themselves in this story – particularly since the NHL comprises around 93 percent white players. A year-long exhibition at the Sikh Heritage Museum and Gur Sikh Temple, a national historic site in Abbotsford, British Columbia, challenges this familiar narrative of “Canada’s national sport” with these underrepresented hockey fans and players in mind.

“We Are Hockey” is a multifaceted exhibition, complete with a carefully curated exhibition space, a research report that investigates the histories and legacies of hockey players of colour, and supplemental a supplemental reading list online. It’s put on by the University of the Fraser Valley’s South Asian Studies Institute (SASI), led by Satwinder Kaur Bains, in collaboration with Courtney Szto of Queen’s University. “We want to tell a history of many perspectives,” said Dr. Bains. “We want to make sure our kids have access to hockey. . . [we want them to] see themselves reflected in the sport.” 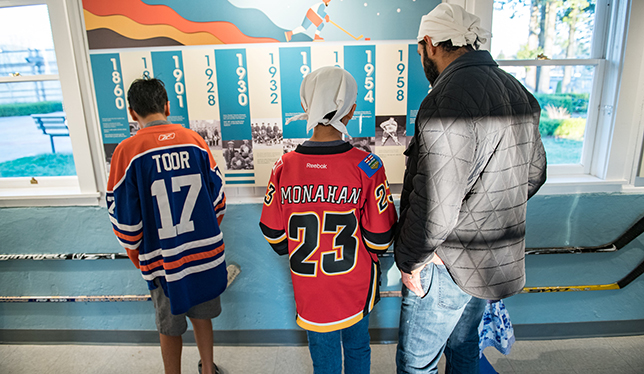 Included in the exhibition are biographies of important players of colour such as Manny Malholtra, a former player and current coach with the Vancouver Canucks, whose father was from Lahore in pre-Partition India, as well as former NHL all-star and Calgary Flames captain Jarome Iginla, whose father is Nigerian. Players’ heritage is important to the exhibition; it decentres whiteness in professional hockey, and it celebrates the important differences and experiences of players of colour and of those who wish to follow in their shoes, Dr. Bains explains.

The exhibition, which runs until February 2020, has been widely supported by the hockey community, including in-kind support from the Vancouver Canucks and opening-night appearances by Hockey Night in Canada’s Punjabi commentators (the exhibition includes a section dedicated to the Punjabi broadcast). For Dr. Bains, this support signalled a “willingness [by the Canucks] to understand this is a unique community.”

The support from the hockey community bolsters SASI in its mission to “interrogate history and introduce new history,” she adds. “This is a responsibility we have, to not only collect the public record, but to illuminate it and give it room to breathe.”

“We Are Hockey” details the histories of people of colour who embrace hockey as part of their identity. “We haven’t just arrived,” Dr. Bains says of the Sikh community, and its growing love of hockey “indicates that our community has matured. It now includes this ‘national sport.’ … We are part of this, we feel, and there is a real sense of pride. We are accepted; we are part of this mosaic here.”