The initiative builds on a pilot project in Nova Scotia to combat the region’s shrinking and aging population.

International students Taruna Boodhun and Khousmita Gopaul started at the University of Prince Edward Island in 2016. They both chose PEI partly because it was an island, like their home country of Mauritius. While they experienced some adjustments, in particular adapting to different foods and the winter climate, Ms. Boodhun says that the multicultural nature of Mauritius helped prepare her for life in PEI and she didn’t experience any significant culture shock.

Now, having completed their second year of university, both say they are keen to stay, but Ms. Gopaul offers a caveat: “It depends on the job offer I get or if I get an offer elsewhere. But I love this island – I want to stay.”

A Nova Scotia pilot program that aims to address challenges in recruiting and retaining international students is being extended across all the Atlantic provinces. It not only aims to keep students like Ms. Boodhun and Ms. Gopaul in the region, but also to address an increasing risk for the Atlantic region: an ageing and slow-growing population.

Kelly Toughill, an associate professor of journalism at the University of King’s College, says the “demographic bomb” that threatens the entire country is set to go off first in Atlantic Canada. Writing for The Conversation Canada, she notes that the region has Canada’s lowest birth rate, highest median age and often sends more residents to other parts of Canada than it takes in. Many see a large increase in immigration as “an inescapable part of the solution,” she says.

The Study and Stay program is expected to start this September in New Brunswick, Newfoundland and PEI. Étienne Chiasson, a spokesperson for the Atlantic Canada Opportunities Agency, says, “There are two key activities that are going to happen with the initiative. The first is attracting and recruiting international students, and the second will be facilitating international students, their integration and retention into the workforce and into the communities.”

The program is currently an agreement in principle between the Atlantic provincial governments, ACOA and Immigration, Citizenship and Refugees Canada. While ACOA and the provinces are in the midst of discussions to tailor the program to the needs of each province, they plan to base it off the N.S. Study and Stay pilot program. 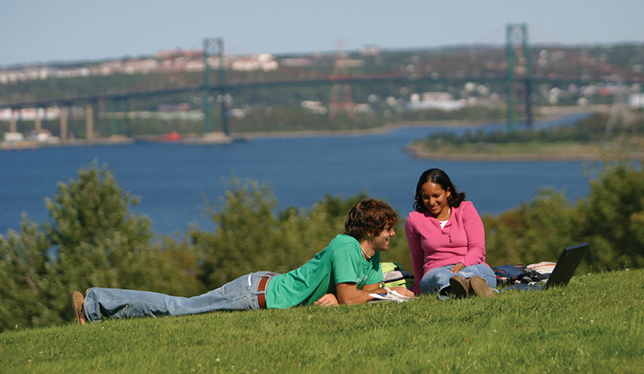 The N.S. program supports students throughout the full duration of their studies and was officially launched in September 2017, with a cohort of final-year students participating in a shorter program – called simply the Stay program – in the 2016-17 academic year. Run by EduNova, a co-operative industry association made up of the province’s education and training providers, it includes services and resources such as one-on-one employment and transition support, workplace placement, and community and peer mentorship.

Wendy Luther, president and CEO of EduNova, says that, while students have access to similar programs at their institutions, the difference lies in the intensity and level of attention they receive through Study and Stay. “The ratio of student-to-staff support is what’s so high. We have one dedicated staffer for the cohort of 50,” says Ms. Luther. Mentors and EduNova staff will offer further support to the students. “It’s a level of attention and support that is difficult to achieve in a different kind of format,” she says, noting that campus-run programs are often designed to assist a much bigger number of students and accordingly have higher ratios.

Corey Frizzell is the international student/employer liaison for UPEI, where international students account for more than 21 percent of the student population. He says the university already offers many of the services included in the Study and Stay program and expects that “essentially it’s going to enhance what we’re doing now.”

While the first cohort of Study and Stay students in N.S. is only just finishing their first year of postsecondary education, the inaugural Stay cohort is one year out from graduation. “We now know quite a bit about how the first group has done and as of [late April] 34 of the 50 had found work in Nova Scotia and an additional five were continuing their studies here in the province,” says Ms. Luther. The program has “a very lofty goal to retain 80 percent of the cohort in Nova Scotia one year post-graduation, where our current retention rates would be around 10 to 11 percent.”

The expansion of the program across the Atlantic is part of the Atlantic Growth Strategy, which includes an aim to increase skilled immigration to the region. “Recruitment and retention of international students represent an important source of skills and talent,” says Mr. Chiasson at ACOA. “By keeping them here and integrating them into the workplace and the economy, they will help grow the economy in the region and also fill skills gaps.”

Lloyd Henderson, assistant vice-president of recruitment and strategic enrolment management at the University of New Brunswick, says the difficult part “is actually finding meaningful employment for them.” But, he notes, “the university is working hard to make sure that we are offering as many co-op programs and student placement programs as possible, and really getting international students exposed to work in the region but also to build their networks.”

The Atlantic region is not alone in its efforts to recruit and retain international students. Quebec, where the population is the fifth oldest in the country behind the four Atlantic provinces, has seen a number of initiatives with similar aims over the past couple of years.

The challenge for the program expansion, says Ms. Luther, “is that it come down to not only the willingness but the passion of the postsecondary institutions to make it successful for the whole province.”