First four winners will come to Canada from the U.K., New Zealand and the U.S.

To federal Minister of Science Kirsty Duncan, Canada’s 150th celebrations are about embracing the inclusivity and openness that the country is known for. That, she said, is why the federal government has invested $117.6 million in one-time funding for international scholars to do research at Canadian universities.

The first four of 25 researchers to be granted funding through the Canada 150 Research Chairs Program were announced by Dr. Duncan on Dec. 13. The program, which was announced in the government’s 2017 budget, is designed to attract international talent to boost Canada’s strength as a global centre for science and research. The appointments are for seven years and are valued at either $350,000 or $1 million annually, depending on the project’s funding requirements.

The four researchers announced so far are:

Dr. Duncan said that bringing in the knowledge and expertise of international researchers will add to the work Canadian researchers are already doing. “I am awed, humbled, and inspired every day in my job. … I really am amazed by the tremendous research being done in our country,” she said. “This is a special one-time program and it builds on what our country is; open to the world and open to ideas.” 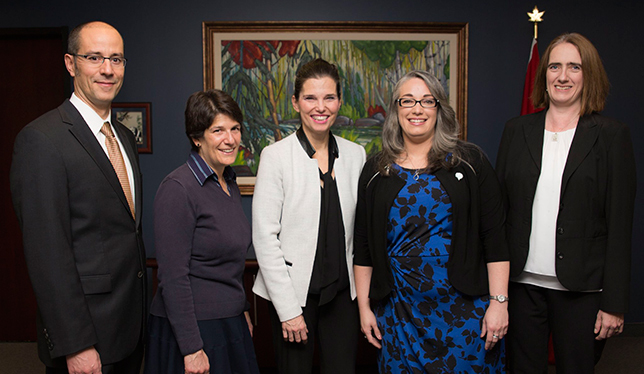 Dr. Addis, who is moving to Toronto from the University of Auckland, will be spending her time researching how memory loss resulting from aging and depression affects the ability to use memory to imagine and plan future events. She earned her PhD as a Commonwealth Scholar at U of T and has maintained a link with the university ever since.

Toronto is a hub for cognitive science, said Dr. Addis, with resources that she wouldn’t have had access to in New Zealand. But, she also said that international research connections are essential to scientific innovation: “I really think that science is a worldwide endeavor. We really need to be bringing the best people in the world together, wherever they’re from.”

This idea was echoed by Dr. Colijn, who is a Canadian who worked at Imperial College London in England before her appointment at Simon Fraser University. She said that international collaborations are essential to her work analyzing tuberculosis data from numerous countries to understand how different settings affect its spread and evolution.

Dr. Colijn explained that London was a great place for research, but that seven years of funding for long-term research was exactly what she needed to return to Canada. “I wanted to come back to Canada eventually. It’s always been on the horizon … so an opportunity like this is exactly what I was waiting for,” she said.

The other two chairholders – Dr. Ramalho-Santos and Dr. Seltzer – will come to Canada from the University of California, San Francisco and Harvard University, respectively.

The Canada Foundation for Innovation will contribute an additional $780,000 to the newly appointed chairs. Dr. Duncan said there are no plans to continue funding this program once the chairholders have completed their terms.