Among their many efforts, students are collecting much-needed protective equipment, aiding frontline workers and assisting with contact tracing.

When Ali Goodbaum gets a text from a volunteer who’s about to pick up or drop off boxes of personal protective equipment (PPE), she goes to the window. From there, the third-year medical student can see the garage behind her mother’s house in Toronto; she presses the remote door opener and watches the whole exchange from a safe, social distance.

“It’s really been amazing. It’s entirely contact-free,” says Ms. Goodbaum, who’s studying at the University of Ottawa but returned home when the school shut down and her hospital-based clinical clerkship was cancelled due to the COVID-19 pandemic. Now, along with six other med students who live in Toronto, she’s helping manage hundreds of volunteers who source and deliver PPE. “We’re not the ones on the front lines. Our colleagues and mentors are,” she says.

Ms. Goodbaum is among the thousands of students across the country in healthcare-related fields using their downtime to help out. Volunteer efforts span the gamut from collecting PPE to aiding frontline workers to helping out with contact tracing. Along the way, these students hone a range of skills, like supply-chain logistics or how to talk to people in crisis. “I feel like we’ve just started a business,” says Megan Singh, a fourth-year medical student at Queen’s University who’s part of a PPE-related volunteer project at her university.

Ms. Goodbaum’s group, PPE for HCP, started at the end of March and has collected over 20,000 masks and face shields, 2,000 gowns and 178,000 pairs of gloves. Over 900 volunteers contact donors and drive around doing pickups and deliveries. Ontario Health directs them to long-term care facilities, hospitals and shelters with shortages. “We knew we would not be the ones making the decision of where the PPE goes. We’re allocating based on need,” says Ms. Goodbaum.

Anna Curry, a third-year medical student, is helping lead the Queen’s PPE project targeting Southeastern Ontario, with guidance from the Ontario Medical Association. “The hospitals have been doing their own drives, so we’ve been focusing on things like community clinics,” says Ms. Curry, whose rotation at Kingston General Hospital was cut short in March. She’s working with three other med students and about 60 volunteers.

“There’s only so much you can source from the community,” says Ms. Curry, which is why both the Kingston and Toronto projects have branched out to, among other things, raising money to purchase PPE. The Toronto group has already pulled in over $11,000.

Ms. Goodbaum and her team also recently launched the Toronto Sews Program, which will see volunteers making cloth masks with fabric secured through a donation.

In Kingston, Ms. Curry and her team work closely with Ms. Singh and nine coordinators who are getting face shields and masks made with 3D printers. “We consider ourselves a stop gap,” says Ms. Singh. Their 60 volunteers, many from the community, include engineering students designing the protective gear, local people with printers making the components, and medical students, leveraging their sanitizing skills, assembling it all. So far, they have printed 2,400 masks and 3,900 shields, and assembly is underway. The engineers have also designed prototype N95 masks, isolation tents and nasal swabs, which the team is having tested for effectiveness. 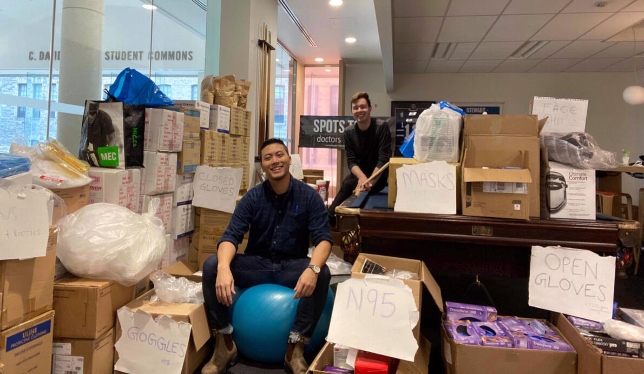 Yezarni Wynn (foreground) is the logistics lead of the PPE for HCPs Toronto at the University of Toronto.

Aid to healthcare workers on the front lines

Easily the biggest such initiative links students from the West Coast to the Maritimes and involves aiding healthcare workers in their homes with child and pet care, grocery shopping and the like. It began in mid-March with five medical students at the Schulich School of Medicine and Dentistry at Western University.

“We wanted to help healthcare workers to deal with the situation they’re going through,” says Montana Hackett, a first-year med student at Western. The group consulted with the public health office and a local law firm, then hatched a one-on-one matching program and put together guidelines and an online sign-up form that launched March 23. They landed 140 medical and dentistry student volunteers, 100 healthcare providers who wanted assistance, and made 50 matches early on.

Some of the tasks, like doing grocery runs, don’t draw on their medical training. But others, such as interacting with stressed-out families and keeping up hygiene protocols while working with kids, ties in directly with their education. “Medical school has really shifted to talking more about the humanity side of things. For many of us, it’s one thing to learn about it, but another to see it,” says Mr. Hackett.

Students from other schools started asking Western for information. Soon, the team was sharing their documents and connecting via the Canadian Federation of Medical Students.

Each of the various projects is playing out differently. The Montreal Student Support Initiative recruited healthcare students from the Montreal area and has made 70 matches with front-line workers, but is now branching out. “We have this pool of really motivated students who want to be helping and we’re trying to find them meaningful opportunities. It’s evolving in a way we didn’t expect,” says Laura Pinkham, a first-year McGill University med student. She and her team of three coordinators were recently offered a food donation from Dole Canada and linked up with the YMCA in downtown Montreal, which used the food to help feed the homeless. The group is also looking at working with physicians who have patients in the community who need extra assistance.

Meanwhile, the staff at public health agencies across the country can’t handle the volume of contact-tracing calls, so students are getting involved there, too. “It’s breaking bad news, all day, every day,” says Richelle Schindler, a fifth-year public health medical resident from the University of Calgary who’s managing 250 medical students (including those from the University of Alberta) to do contact tracing on behalf of the province. These calls involve telling a person they’ve tested positive, offering them information, finding out who’ve they’ve been in contact with, and then calling those people.

Dr. Schindler says her volunteer project began with U of Calgary reaching out to the public health agency when classes moved online, suggesting students could help. “We set things up over a weekend in March,” she says, recalling that it began with training a handful of students, who then trained the next cohort. Some work at public health offices in Calgary and Edmonton, while others do calls from home. Dr. Schindler says these students not only do excellent work with clients, but they’ve also come up with ideas to improve the system. “They’re seeing policy issues and seeing how to fix them,” she says.

Others have begun following Alberta’s model of doing contact tracing with student volunteers. That includes Western students, who are working at the Middlesex-London Health Unit in London, Ontario. “We put out a call to our classmates and there was an overwhelming response of over 100 volunteers,” says Michelle Quaye, a fourth-year student at Western.

Ms. Quaye has done some contact tracing herself, along with her organizational role. “It’s been really eye-opening and honestly a privilege to be able to help someone on a person-to-person level, for their own sake and for the community at large,” she says. “It’s been a great learning opportunity for all of us.”