How Thompson Rivers University is improving outcomes for Indigenous people

One program, Knowledge Makers, was recently recognized with the Alan Blizzard Award for excellence in teaching collaboration.

While in Tasmania on a cultural exchange for Indigenous students, Tess Wintercross visited one of the traditional territories of the Aboriginal people and was invited to cleanse herself with the smoke of smouldering gum leaves. An Aboriginal gentleman observing her smiled knowingly, Ms. Wintercross remembers, because she knew intuitively how to perform the ceremony, which felt similar to smudging, a practice performed by many North American Indigenous cultures, whereby smoke is pulled to the body and inhaled to purify and heal the heart, mind and being.

Ms. Wintercross, a fourth-year fine arts student at Thompson Rivers University in Kamloops, British Columbia, said the experience of making deep connections with Aboriginal people on the other side of the world informed an article she was working on at the time, a research paper on the impact of microaggressions on Indigenous people.

“Being able to connect with other Indigenous people really opened my eyes to what my voice is and what I can write about,” said Ms. Wintercross, who grew up in Kamloops but whose home nation is the Onion Lake Cree on the border between Alberta and Saskatchewan. “It sparked this whole year of self-discovery and reconnecting with my culture. … It got rid of a sense of shame.” 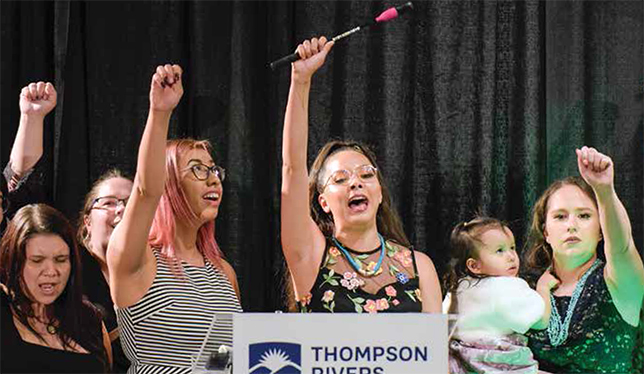 The paper Ms. Wintercross wrote was published in a peer-reviewed journal for Indigenous student researchers, part of TRU’s award-winning Knowledge Makers program, a university-wide initiative that facilitates research by Indigenous students using Indigenous research methodologies. Students in the Knowledge Makers program attend a two-day workshop and meet with a coordinator who mentors them through the process of researching their papers.

The young researchers benefit from Knowledge Makers’ rich network of relationships with faculty, staff and administrators across TRU; with elders from Secwépemc Nation, on whose traditional lands the university resides, as well as other nations; and with international Indigenous scholars at universities in Canada, the United States, Mexico, New Zealand and Australia. At the close of the program, the students receive a $1,000 award and copies of their published article at a celebratory dinner.

“What we’re trying to do is help them see that research is a form of service and it’s a possible career. It’s something that they can do, be paid for, and give back to their communities,” said Sereana Naepi, Knowledge Makers’ coordinator and an associate director in TRU’s All My Relations Research Centre, dedicated to connecting Indigenous researchers with Indigenous communities.

Launched in 2015, Knowledge Makers has had more than 65 Indigenous students from at least 30 nations and bands complete the program. There are two streams, one for undergraduate students and one for graduate students. In April 2019, it received the Alan Blizzard Award from the Society for Teaching and Learning in Higher Education, a prize that recognizes excellence in collaborative teaching and learning in postsecondary education. More than 40 people across TRU contribute to the program, making Knowledge Makers one of two key, pan-institutional programs that are part of TRU’s Indigenization efforts, undertaken in response to the Truth and Reconciliation Commission and its calls to action.

The second program is the Coyote Project, which aims to eliminate educational and employment gaps between Indigenous and non-Indigenous Canadians. Each faculty or department publicly states its goals around three key measurements: student recruitment, student retention, and the success of Indigenous students. Funded internally with $1.05 million over five years, the program distributes money to help the faculty and departments reach their individual goals. Some have created new courses or altered curricula; others have supported Indigenous research; still others have looked for ways to make their physical spaces more inviting for Indigenous students.

Both Knowledge Makers and the Coyote Project are led by the faculty of education and social work, guided by its dean, who goes by the single name Airini. A Fulbright Scholar and former consultant to UNESCO and Pacific nations, Dr. Airini moved here from New Zealand. Her research interest is equity in education, with a focus on Indigenous achievement.

“If you want to create change that is truly transformational, then you have to go beyond the individual effort,” Dr. Airini explained. “We know from the research that it takes a whole institution approach if you are going to have the kind of change that happens beyond one day, one month, one event, one program, and actually lasts for one decade and more.”

Christine Bovis-Cnossen, TRU’s vice-president, academic, believes the Coyote Project has been successful because it wasn’t dictated from the top but instead was conceived by Dr. Airini and her department and rolled out across the university. “It needed to be organic,” said Dr. Bovis-Cnossen. The institution can provide high-level priorities, she continued, “but in order to make projects successful and to get buy-in from very disparate areas, you need to actually let them decide how they want to move forward.”

Reflecting on her contributions to Knowledge Makers and the Coyote Project, Dr. Airini describes her work as a form of service, undertaken with permission from the Indigenous peoples of the land TRU resides on. She said she hopes the project will be expanded into many more territories and believes that Knowledge Makers is scalable and can be adapted to include Indigenous researchers at universities anywhere in the world. She and Dr. Naepi envision a suite of peer-reviewed Knowledge Makers journals, a version for every institution involved, every country, and perhaps an international edition, too.

“What we’re doing here is one part of the grand plan around an Indigenous renaissance in research and identity,” Dr. Airini said. “We have to accelerate the pace of change because we can’t in all conscience permit underachievement and under-service to Indigenous students to continue in the way that it has continued internationally.” Her personal and professional motto says it all: “When we talk about success for all in education, I want it to mean all.”

Thompson Rivers University writes: “At the last Knowledge Makers event, one of the students sang the Women’s Warrior song and invited all female Knowledge Makers, elders and women in attendance to join her in this traditional drumming song to show support for one another, and honour the work that is taking place at TRU. The Women’s Warrior song conveys unity, strength, resilience, connection to land, protection of rights and perseverance. Women are keepers and guardians of songs, sacred ceremonies, stories and history. With Knowledge Makers, this is affirming the role, the calling of Indigenous women and their communities to be their true selves as researchers serving their peoples.”