It’s all geek to Benjamin Woo

The researcher’s curiosity about comics culture all started in childhood.

Benjamin Woo has been an avid comic book fan since the age of nine. This was before the internet enabled us to have almost anything shipped to our doorsteps, back when comics were mostly the purview of brick-and-mortar comic book shops. And yet, the fact that Dr. Woo’s hometown didn’t have one didn’t stop him. “I would have to convince my parents to drive me to the [shop] two towns over,” he says. He also subscribed to a magazine about comics, where he learned about recent storylines, trends and trivia — but always a little bit later than the people who actually read those comics. 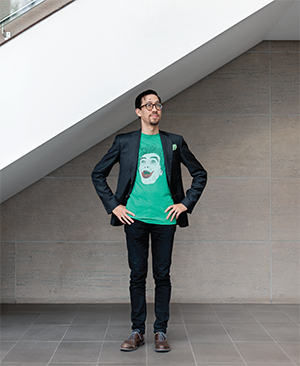 Despite the sometimes simplistic stereotypes around
geeks, fan culture is no joke to communications
studies professor Benjamin Woo at Carleton
University. Photo by Tony Fouhse.

Dr. Woo, now an assistant professor of communication and media studies at Carleton University, describes this early relationship with comics as something of “a distant thing.” This distance, he says, is perhaps what led him to become “an observer of comic book fandom” by profession. “The way that I have structured my research career and the projects that I have undertaken, it’s not actually about comics,” Dr. Woo says, “it’s about people. And people are endlessly fascinating.”

In his latest book, Getting a Life: The Social Worlds of Geek Culture, Dr. Woo attempts to clear up the misconceptions about geek culture. Portrayed in films like Revenge of the Nerds and TV shows like The Big Bang Theory as a group of obsessive losers and weirdoes who spend too much time arguing who’s the best Star Trek captain, geek culture is better thought of as a subculture of people who are enthusiastic about certain media forms and genres (comic books, video games, science fiction); it’s about how we interact and engage with media, rather than just about a collection of objects, texts, characters, brands and stories. “For me, geek culture is an example of a kind of media-oriented community.” By looking at geek culture and subcultures like it “we see that media can be a resource for building relationships, for making connections with other people, for creating quite stable and lasting communities.”

Dr. Woo says that geek culture, like any other subculture, is evolving. “Simplified narratives [about geek culture] aren’t going to tell us a whole lot about why people find value in it,” he says. “All of these [narratives] involve a kind of flattening out of what is an ongoing, messy, unfinished process of people trying to build and sustain communities.”

Do you consider yourself a geek or a nerd?
Sure. With the proviso that those are words that only make sense as they are used to do certain kinds of discursive work in social communities – yes, absolutely.

What is your favourite comic series?
Transformers vs. GI Joe. It should read as Hasbro vanity, but IDW, that had the license to do it, gave it over to Tom Scioli who turned it into the most formally inventive, avant-guard comic that was appearing in a mainstream comic book store at the time. It is just bananas.

Movie franchise you would have liked to have been a consultant on?
Buckaroo Banzai Across the 8th Dimension. If they ever do a reboot of Buckaroo Banzai, I want to be involved.

Do you consider yourself a DC or Marvel fan?
I have more of a nostalgic connection to DC comics and the DC universe. For awhile I wasn’t very interested in the contemporary comics that were coming out from DC. But I think more of the books that I follow on a regular basis have tended to be DC books because I do like those characters.