Looking ahead in higher ed: what keeps University Affairs’ columnists up at night?

At a panel discussion at Congress, three academics reflect on the challenges facing universities.

Academic freedom, sustainable support for Canada’s research ecosystem and the quality of undergraduate education were among the major preoccupations of a panel of three University Affairs columnists speaking at the Congress of the Humanities and Social Sciences on June 4 in Vancouver. University Affairs convened the panel as part of the publication’s 60th anniversary celebrations this year (the magazine’s first issue was published in October 1959).

The three panelists were Shannon Dea, associate professor of philosophy and vice-president of the faculty association at the University of Waterloo, and author of the Dispatches on Academic Freedom column; Creso Sá, director of the Centre for the Study of Canadian and International Higher Education at the Ontario Institute for Studies in Education (OISE) at the University of Toronto, and author of the Policy and Practice column; and Jessica Riddell, associate professor in the English department at Bishop’s University, holder of the Stephen A. Jarislowsky Chair of Undergraduate Teaching Excellence, and author of the Adventures in Academe column. 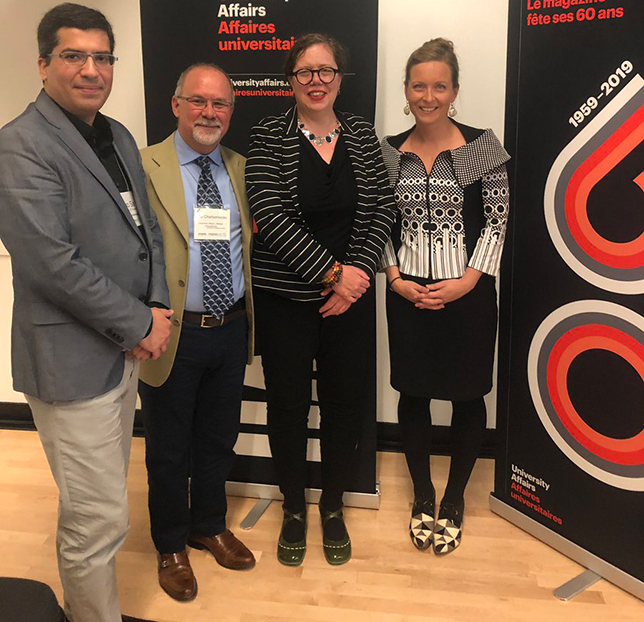 Academic freedom is under threat at universities around the world and closer to home, with Ontario and Alberta governments “trying to intervene in the business of universities and tell us what we can or can’t research,” said Dr. Dea. And yet, “you would be unlikely to find any other kind of institutions or space that has greater freedom of expression than Canadian universities,” she said. “Universities remain places where students engage in vigorous debate, where students challenge prevailing views, where students disagree with their professors.”

Another challenge for Canada’s university community is the trend toward framing support for research as a partisan issue, said Dr. Sá of OISE. Referring to report of the Fundamental Science Review panel, chaired by David Naylor, Dr. Sá said: “the trap of the report is that, as much as the scientific community has coalesced around it and advocated for it both on and offline, it was conceived as a Liberal Party initiative. It was not conceived as a report for the country,” which might have given it more longevity as a cross-partisan initiative, he said. As for the future of the report’s recommendations, Dr. Sá said Budget 2018’s major injection of research funding likely marks the end of significant investment tied to the Fundamental Science Review.

Renewed attention and investment are also needed at the undergraduate level, said Dr. Riddell. “We’ve seen a trend over the last 20 years to have a rapid increase in enrolment to most of our postsecondary institutions without the concomitant shift to more resources, more faculty, more hires [and] more infrastructure,” said Dr. Riddell. Accessibility and the democratization of higher education are crucially important, including as a way forward in the reconciliation process with Indigenous peoples, she said.

With increased enrollment and diverse student needs to address, Canadians do need to think critically about what it takes to maintain quality undergraduate education across the range of campus and class sizes, she said. This includes providing learning experiences that help students develop resilience and “competencies that don’t necessarily show up on standardized tests, like curiosity, courage, empathy and hope.” On whether universities are devoting enough attention to building teaching capacities, Dr. Riddell said, “the simple answer is no.”

Reflecting on the influence that tenure and promotion policies have on perceptions of teaching, Dr. Sá noted that, at U of T, it is possible to pursue tenure based on excellence in teaching and competence in research – and vice versa – but that he still sees few academics making a case for tenure based on excellence in teaching. Universities and faculties are operating in “an interwoven system of incentives and rewards that faculty pay attention to,” and professional rewards and disciplinary norms continue to recognize research as a key parameter of success, said Dr. Sá.

“It’s worth saying that in order to reward teaching, we need some way of assessing the quality of teaching, and that’s super contested right now,” said Dr. Dea, noting the precedent-setting 2018 decision by an Ontario arbitrator directing Ryerson University to ensure student evaluations of teaching “are not used to measure teaching effectiveness for promotion or tenure.”

“I think the Ryerson arbitration and the emerging literature about the problems of the use of student evaluations of teaching is going to put us in a position where we start to think in a much more robust way about the range of different ways of assessing teaching,” said Dr. Dea. “Designing the assessments well means designing the activity well, so I’m hoping that that’s going to shift how we value teaching as well.”