The university is a pioneer of problem-based learning and was one of the first Canadian institutions to open a teaching and learning centre.

It’s official: McMaster University ranks as one of the top teaching universities in the world. The university in Hamilton, Ontario, is this year’s winner of the Global Teaching Excellence Award. The international prize is administered by Advance HE, a not-for-profit organization in the U.K. jointly owned by GuildHE and Universities UK, and is sponsored by Times Higher Education. 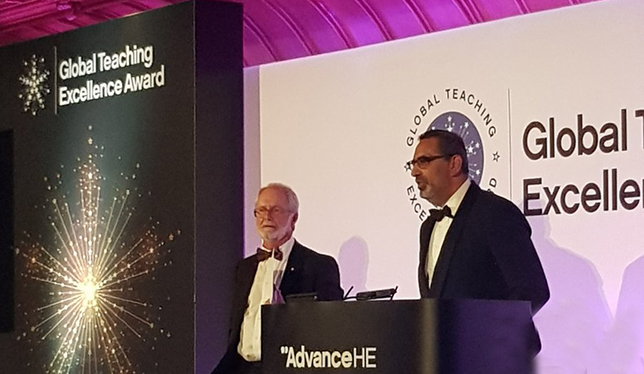 Judges praised McMaster for “the strength of its vision and plan for achieving teaching excellence and the provision of evidence that is embedded institution-wide.” According to McMaster president Patrick Deane, the university has “worked very hard at teaching and learning issues” while building up its international research portfolio. He adds, “Mac is known around the world as the place that gave birth to problem-based learning … and [has] a long history of pedagogical innovation.”

The president notes that the win came largely due to the work of McMaster’s Paul R. MacPherson Institute for Leadership, Innovation and Excellence in Teaching, which started out as one of the first centres on a Canadian campus to focus specifically on the practice of teaching and learning.

Dr. Deane and Arshad Ahmad, vice-provost of teaching and learning, accepted the award on behalf of the university at a ceremony in Edinburgh on July 18.