Memorial professor brings the mountain to her classroom

Mountain climber TA Loeffler says she wants to inspire people to be more active and to have big dreams.

Climbing mountains has its own intrinsic appeal, but Memorial University Professor TA Loeffler recognizes that it is also a powerful metaphor, which adds to its attraction among the public. “People have their own relation to the idea of the mountain and having an ‘Everest,’ and what that means to them,” she says. 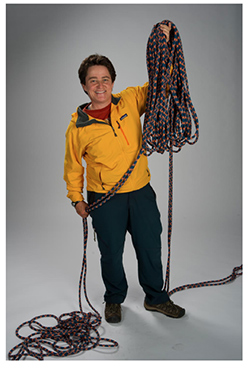 TA with her climbing gear.

A professor of outdoor recreation, Dr. Loeffler has always been a talented athlete and outdoors enthusiast. However, nearing 40 a decade ago and seeking a new challenge, she decided she would climb the “seven summits” – the tallest mountains on each of the seven continents – starting with Mt. McKinley (also known as Denali) in Alaska, the highest summit in North America. Over the next six years she succeeded in summiting six of those seven peaks. Despite two attempts, in 2007 and 2010, the biggie of them all still eludes her: Mt. Everest.

“It was a heartbreak. It was a huge disappointment,” she says of that first missed attempt, in 2007. “Everyone was cheering me on. I wanted nothing more than to go [on the final push to the top], but circumstance dealt me a different deal.” The second attempt in 2010 was still a disappointment but stung less, she says. “You put in all this effort and training, and in the case of Everest so much fundraising, and it all comes down to one 24-hour period where everything needs to come together.”

Dr. Loeffler gives frequent talks to schoolchildren and invites them to follow along in her adventures. “My goal is to inspire people to be more physically active and to have big dreams.” Dr. Loeffler also draws on her experiences in her own classroom.

“I teach a lot of outdoor education courses, so if we’re talking about risk management in class, or group dynamics, I can bring in real, lived examples.” As well, she involves her students in the development of curricular materials that are used by children in grade school classes. Dr. Loeffler has received numerous teaching awards, including Memorial University’s President’s Award for Distinguished Teaching in 2005 and a prestigious 3M National Teaching Fellowship in 2008. 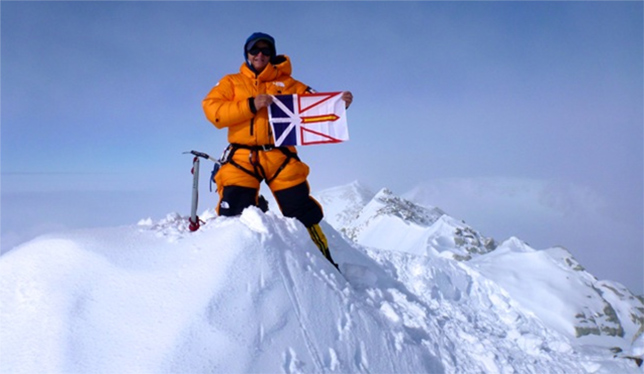 TA Loeffler on the summit of Mount Vinson, the highest peak in Antarctica, in December 2011.

Her research focuses on the importance and value of outdoor activities. Her current project involves people over 50 who have “spent their whole lives outdoors and what they can teach us as exemplars of lives well-lived,” she says.

Her next adventure, planned for this May, is to climb Canada’s highest peak, Mount Logan in the Yukon. Its “a spectacular peak and it will be an excellent challenge, and I very much look forward to working with classrooms again with the expedition.”

Will she return one day to Mt. Everest? “I have spent the last five years trying to answer that question … and basically it’s not letting me go,” she says. In fact, up until early January she planned to go this year but is now looking “very seriously” at 2016. In classrooms, Dr. Loeffler is often asked what her initials “TA” stand for. “It’s the most common question I get, and I always answer ‘totally awesome’ and that gets a giggle.” But a recent Grade 4 class decided it means “try again,” she says. “It was the sweetest thing.”