Ontario’s 2018 budget cuts to French-language services denounced in a collection of poems by Franco-Ontarian academics.

Responding to the Ontario government’s cuts to French-language services last fall, members of the Franco-Ontario community decided to respond with … poetry. Poèmes de la résistance (poems of the resistance) is a collection of poetry from 37 contributors – a number of them academics – compiled by the Sudbury, Ontario-based publisher Prise de Parole to give a voice to Franco-Ontarians’ indignation and creative strength.

Sparked by a first poem published on social media, the idea gradually took shape as a multi-author collection. “Poetry is meant to be read and to be spoken – a means of direct access. We had to let our anger shine,” explains Stéphane Cormier, co-director of the publishing house. His call for submissions quickly spread through the entire Franco-Ontarian literary community. 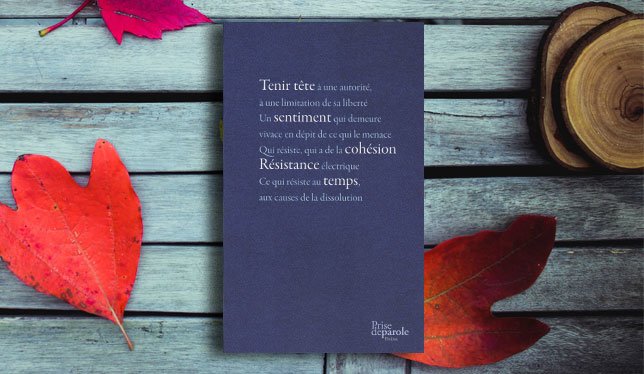 “As a defender of literature, I rallied to the cause as soon as I heard the Ontario government’s disavowal of the province’s francophone community,” says writer Thierry Bissonnette, a professor at Laurentian University (also known by his pen name, Thierry Dimanche). “It meant engaging in a sense that was not purely political,” he says, underlining the danger of “forsaking the poetical for the boringly political.”

Sylvie Bérard, a writer and professor of literature at Trent University, confirms the interest in the project shown by those in the university community directly concerned with the threat to language rights. Her contribution, Entre l’oméga, she describes as a poem that stands at the crossroads of Ontario highways and the paths of resistance. “Poetry can say much in a few words and put the focus on meaning,” she says.

Poems can give voice to whispered undercurrents, as sensitive to current events as to universal themes – a far cry from the genre’s elitist, dated image in the minds of many. “Omega is a symbol of ending, but I wanted to address the threat of an end,” says Dr. Bérard, speaking a week after the signing of an agreement between the federal and provincial governments to fund the establishment of a French-language university in the province, the Université de l’Ontario français (UOF). The Ontario government had previously announced it would not go ahead with the university as part of its planned budget cuts.

The Franco-Ontarian community has rallied around the creation of the university since it was first announced back in 2017 by the previous Liberal government. “Outside Ottawa and Sudbury, it’s difficult to receive an education in French, and still more difficult if the discipline is anything other than French literature,” says Dr. Bérard.

Mr. Cormier says he doesn’t think progress in the UOF project has made the collection redundant, far from it: “In 10 years’ time, this collective work will stand as a snapshot of the protest in the present tense.”