Australian academic Shari Forbes laughs when asked on a frigid winter’s day why she decided to leave her hot country and return to work in cold Canada. “It seemed like a fun challenge,” she says. “Our countries are two extremes.”

Dr. Forbes holds the Canada 150 Research Chair in Forensic Thanatology at Université du Québec à Trois-Rivières, where she is also the founding director of Canada’s first human body farm – a secure site where cadavers are placed in outdoor settings to study their decomposition. An expert in the chemical processes that occur post-mortem when soft tissue decomposes, Dr. Forbes will be spending the foreseeable future figuring out the impacts that Canada’s environment has on human remains.

Her forensic findings, together with those of the half-dozen other UQTR researchers who will work alongside her, are expected to yield important data that will help police, the military and even human rights organizations with legal death investigations, and victim recovery and identification.

Much of that pioneering research will take place in an open-air facility on a small parcel of land in collaboration with an industrial science park in nearby Bécancour. Expected to be in operation by year’s end – once Quebec’s environment ministry issues the permits needed to leave up to 10 dead bodies a year outside – the site will become the first human body farm in Canada, the most northerly one on the planet and only the third outdoor laboratory of its kind outside the United States. 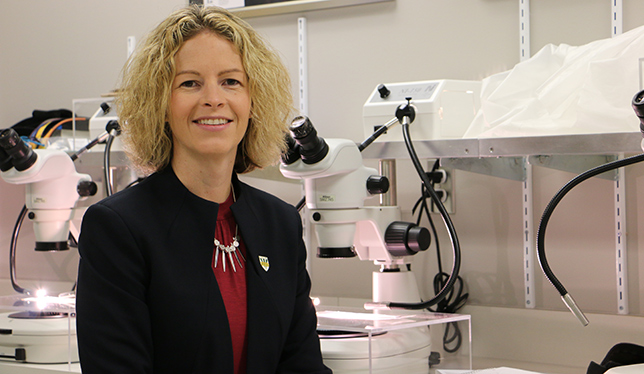 It was Dr. Forbes who established the first non-U.S. body farm, in Australia, in 2016. A graduate of the University of Technology Sydney, she spent seven years working in Canada, from 2005 to 2012, as a professor and founding director of the undergraduate forensic science program at the University of Ontario Institute of Technology in Oshawa, Ontario. She returned to her alma mater after that, where she spearheaded efforts that led to the opening of the creatively named AFTER, or the Australian Facility for Taphonomic Experimental Research.

Around the same time, UQTR was busy building its own criminal investigation program. In 2012, the university recruited French forensic scientist Frank Crispino, who subsequently served as the inaugural director of the university’s Laboratoire de recherche en criminalistique from May 2015 until July 2018. Prior to joining the university, Dr. Crispino did both scientific and operational police work in the fight against organized crime and terrorism in Paris. Together with Gilles Bronchti, director of UQTR’s anatomy department and the person responsible for the body donation program the school set up 20 years ago for the interdisciplinary study of death, the two successfully developed and promoted the project to establish a human decomposition facility at UQTR.

“Trois-Rivières is a small city halfway between Quebec’s two major metropolises – Montreal and Quebec City,” says Dr. Crispino. “We need to create new and innovative programs like this in order to differentiate ourselves.”

He admits he was pleasantly surprised when Dr. Forbes agreed from sunny Sydney to be their applicant for a Canada 150 Research Chair – and elated when she landed one of the 24 chairs that were announced in 2017, a position that provides $350,000 in funding each year for seven years. “Nothing in science is certain and one of the big challenges in forensic science is having confidence in the results of the investigation and the data collected when a grave is found,” says Dr. Crispino. “Working on a daily basis with a truly world-class scientist like Shari will help to decrease that uncertainty.”

For her part, Dr. Forbes says she gladly accepted UQTR’s offer once she learned that the university had managed to do the three things that she says are crucial for the establishment of a human body farm: an organization willing to lead and support it; a body donation program; and accessible, licensed land for research. “A donated body is an extremely valuable gift to society,” she says. “It helps to advance science and give a voice to the dead.” 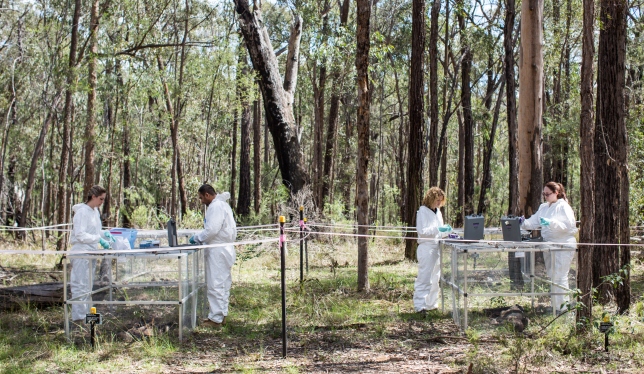 Shari Forbes (second from right) works with colleagues in 2017 at the Australian Facility for Taphonomic Experimental Research, the first “body farm” outside the U.S., which she established in 2016. Photo courtesy of Anna Zhu Photography & Film.

Dr. Forbes also lauds UQTR’s efforts to raise public awareness about the outdoor facility and the value of the research that will be done there. Part of that effort included a public presentation on the project she gave in Bécancour in November in French, a language she says she is trying hard to learn. “It’s part of the challenge of coming here,” she says. “But I’m up for it.”

Dr. Forbes says she is eager to begin placing bodies on the site – either on the ground, in shallow graves or in other scenarios – and to watch, smell and study the decomposition that takes place (one of Dr. Forbes’ areas of expertise is the study of the volatile organic compounds that cadavers produce). Exterior fencing will be erected around the site and the bodies will be covered with metal mesh cages to protect them from scavenging animals.

In addition to her work, which involves tracking and trapping changes in the smell of rotting flesh (used to train cadaver-detection dogs), a variety of researchers will visit the site to track rates of decomposition through DNA samples, the presence of insects and larvae, and the weathering effects on everything from bones and teeth to textiles and clothing.

Unlike in Australia, where arid landscapes and scorching heat mean dumped or discovered bodies are rarely buried and usually mummified, Dr. Forbes says “surface depositions” of cadavers are rarer in Canada. Rates of decomposition here also differ, she adds, especially in northern areas where dead bodies freeze and thaw with the seasons.

“Climate and geography have direct impacts on decomposition,” says Dr. Forbes. “But it’s also ecology: the type of insects here are different. Culture also plays a role. The things we eat impact the smell of our remains.”