A small bus that’s becoming a familiar sight at the University of Waterloo could represent a giant leap in self-driving transit. That’s what Amir Khajepour, an engineering professor and Canada Research Chair in Mechatronic Vehicle Systems, is hoping. He’s the lead researcher on the WATonoBus project, which is using the university’s main campus as a testing ground.

The 2.7-kilometre loop features traffic lights, delivery trucks, even meandering Canada geese and – in non-pandemic times – countless jaywalking pedestrians. In recent months, the aqua-coloured WATonoBus has been navigating such obstacles along the route at a top speed of 20 km/h, and making five stops along the way, guided by technology developed in Dr. Khajepour’s lab. 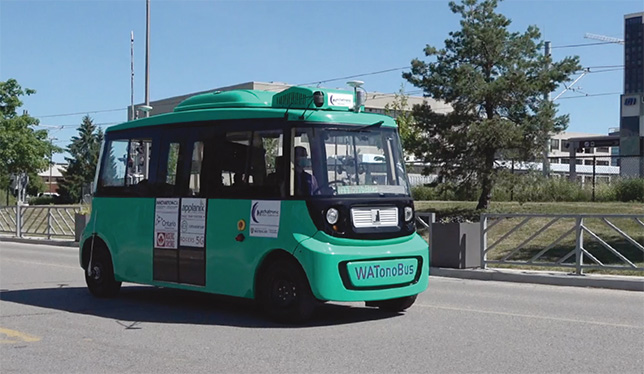 Unlike other self-driving vehicles, he says the shuttle is wired with data about the roadway and self-localization, making it more independent. So even if a GPS signal isn’t available, the electric-powered bus can still run. While a driver is on board during current test runs as a safety measure and to follow regulations, the next step is to get additional approval under the Ontario Ministry of Transportation’s Automated Vehicle Pilot Program to start driverleess trials. An operator in a control room would be able to commandeer the bus remotely if needed.

Ross McKenzie, managing director of the Waterloo Centre for Automotive Research, says the project is the first of its kind at a Canadian university. He describes the WATonoBus as the end product of a myriad of smaller innovations, “whether it’s better cameras or sensors that utilize LIDAR (a remote sensing method using light) that can detect 150 metres ahead instead of 100 metres, or enhanced features like adaptive cruise control.”

I came across this morning @waterlooeng‘s Watonobus doing some testing. It could just be me but, the ‘pedestrian’ should have on headphones and be looking at a mobile device🤪. #looksgreat #autonomousvehicle #watanobus #uwaterloo #engineering #selfdrivingcar #innovation pic.twitter.com/oQL2I4wbp7

To get the ministry’s blessing, Dr. McKenzie says infrastructure along the Ring Road may be upgraded with internet-connected sensors on lampposts. The end goal is to see self-driving shuttle buses in use on fixed routes such as university campuses, resorts, airports and municipal transit systems.

But there are other applications for the technology. Dr. Khajepour’s team is also building a self-driving utility truck that could be used for industrial operations such as open-pit mining.