The action plan lists several promising practices in place at universities, but urges institutions and governments to do more.

Student organizations from across the country have joined forces to advocate for stronger action to curb sexual violence on university and college campuses. At the heart of their efforts is an action plan for governments and postsecondary institutions, which launched at the start of the school year.

Isabel Ojeda, one of the plan’s authors and a fourth-year student at Memorial University, said that the recommendations are a way to hold postsecondary institutions to account: “I see these calls to action as a way for us to say [to university administrators] … it’s your job to create campuses that are safe, and to create places where students feel comfortable being and existing.”

McGill University is among the institutions whose work on sexual violence response and prevention is highlighted in the calls to action. The institution’s approach has been shaped in part by provincial policy.

In 2017, the Government of Quebec adopted a five-year strategy and legislation to combat sexual violence at CEGEPs and universities and earmarked $23 million in funding to support postsecondary institutions in that effort. Two years later, in 2019, McGill adopted a revised policy on sexual violence prevention as required by the provincial legislation (the university’s original policy was enacted in 2016), and created a mandatory online sexual violence education program for all students, staff and faculty. 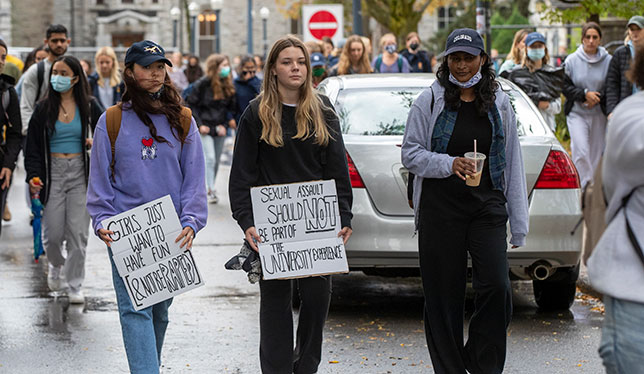 Queen’s University student organize a walkout to protest sexual assault on campuses and in support of the victims of sexual assault at Western University, in Kingston, Ontario, on Monday, Sept. 27, 2021. The Canadian Press Images/Lars Hagberg.

Designing and delivering the program to the university’s 50,000 members was a massive undertaking which “signalled to the community a real transformative shift in culture that this was something the institution cared about,” said Angela Campbell, McGill’s associate provost, equity and academic policies.

The university’s office for sexual violence response, support, and education (OSVRSE) is a central hub that coordinates most aspects of the institution’s response to sexual violence. Dr. Campbell describes the office as an “unconditional site of support for survivors” who might be seeking to file a complaint, launch an investigation, or seek academic accommodations tailored to their situation. “The team would then work with the survivor to say, what are your needs?” she said. “And based on that information, the team would facilitate accommodations with other offices across the university.”

OSVRSE is a member of the committee tasked with reviewing and implementing McGill’s policy against sexual violence. It’s joined on the committee by senior university administrators and student representatives, who meet four times each year. “Our Campus, Our Safety” highlights that the student representation on this committee is a “promising practice” that helps to centre survivor voices in policymaking.

Farrah Khan, who manages Toronto Metropolitan University’s sexual violence support and education office, says universities could take this practice a step further by compensating students who participate in this committee work. In 2019, TMU reached out to alumni and current undergraduate students to ask if two student leaders would serve as co-chairs on its sexual violence task force. Both were paid opportunities.

“We gave them infrastructural supports to lead committee and report … by providing mentors and paying them. Universities need to make sure that students have the ability for these leadership opportunities,” said Ms. Khan, who also leads a consultancy overseeing Courage to Act, a federally funded initiative to address gender-based violence at postsecondary institutions. “Our Campus, Our Safety” is a product of that initiative.

The action plan authors also highlight the need for campus programming that incorporates intersectionality (acknowledging that an individual may be subject to multiple forms of discrimination due to holding multiple racial and social identities) and addresses the relationship between sexual violence and other forms of oppression such as racism, misogyny, ableism, classism, homophobia, and transphobia. A “one-size-fits-all approach” negates the unique needs of key demographic groups such as Black and Indigenous students who are impacted differently by sexual violence, said Ms. Ojeda.

However, developing and delivering more nuanced programming is difficult if sexual violence offices at postsecondary institutions lack the necessary resources to do so. During a course for campus staff who work in the field of sexual violence prevention, hosted by Courage to Act last summer, Ms. Khan heard from several participants that they often pulled double duty as both educators and frontline crisis support workers. “That’s a lot to hold for one person,” said Ms. Khan. She emphasized the importance of consistent provincial funding to support universities in hiring more staff to address the issue.

There are currently seven provinces that legislate policies addressing sexual violence and harassment at postsecondary institutions (British Columbia, Alberta, Manitoba, Ontario, Quebec, Nova Scotia, and Prince Edward Island). The authors of the student action plan argue that these provincial mandates are often vague, however, and that the legislative patchwork across the country leads to inconsistencies in policy and implementation from university to university.

While universities have increasingly taken on the responsibility to combat sexual violence on their campuses, the report notes that sexual violence is also a cultural issue that stretches beyond campus borders. “When we talk about rape culture, that doesn’t begin at universities … we are part of something much bigger,” said McGill’s Dr. Campbell. “But while it might not be the institution’s fault, it is the institution’s responsibility.”

Ms. Khan shared the sentiment, but added that universities should act for change beyond their institutions. “We have a crisis in Canada where we’re not taking this issue seriously, and it’s not just about universities,” she said. “But I also think that universities and colleges need to be on the front lines of saying to government, ‘You need to act on this. We can’t solve this issue.’”