In this course, undergraduates work hands-on with local businesses to learn how to measure and offset carbon emissions.

Universities are sometimes criticized for producing graduates who lack real world experience. University of Northern British Columbia student Louisa Hadley – who’s in her final year of an undergraduate program in environmental and sustainability studies – doesn’t think she’ll be one of them.

For that, she credits a course called “Carbon and Energy Management.” A partnership between UNBC and the Prince George Chamber of Commerce, the course allowed Ms. Hadley to spend part of her third year producing a carbon footprint analysis for a local furniture warehouse. Funded by CN, the class matches students with Prince George businesses interested in reducing their reliance on fossil fuels and offsetting their carbon emissions.

Students learn how to evaluate heating bills, vehicle use and travel patterns as well as how to calculate a carbon footprint and find strategies for reducing it. Their instructor coaches them on how to ask the right questions in their analysis of a business. For example, they might want to know how often their client’s business vehicles are required to stop and start – a process that burns more fuel and boosts carbon emissions.

After in-class work on the fundamentals of energy management, students are sent out in pairs to meet their assigned business owners and put their learning into practice. That, says Ms. Hadley, is where the important lessons happen.

“In the real world, the information you are presented with never matches up to the perfect textbook example learned in class, or the dataset presented on a midterm or exam,” she says. 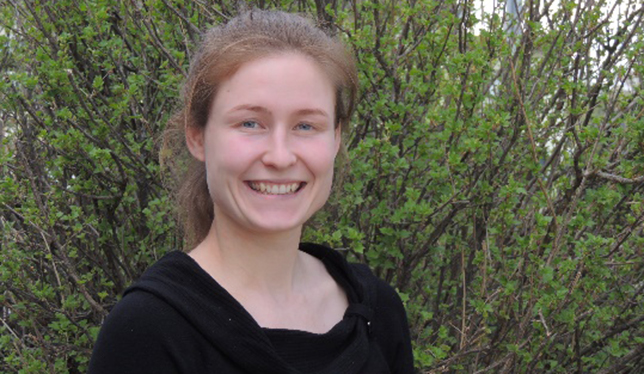 While a confidentiality agreement prevents her from revealing the contents of her analysis, Ms. Hadley says the business owners she worked with were completely engaged in the exercise. They met with her, answered all questions, gave her a tour of their facilities and even took part in her final class presentation.

She’s also grateful to them and to her instructor for teaching her some of the softer, people-related skills. Ms. Hadley says she learned how to communicate in a professional manner, write a report and deliver a focused presentation to clients.

Annie Booth, curriculum chair for the environmental and sustainability studies program, is the self-described fairy godmother who conjured the carbon footprint course into existence. When Prince George’s Chamber of Commerce got in touch in November 2015 to say it had funding, she saw it as an opportunity to connect the university more closely to the city.

“A lot of people in the community find the university intimidating. We’re scary people. We have PhDs,” she says. “Universities need to work harder to get out of their ivory towers.”

Dr. Booth worked fast to create a credit-based course for the January 2016 term. By mid-December, just weeks after first connecting with the chamber of commerce, she had found an instructor with the required technical expertise and had “arm-twisted” several third-year students into signing up.

January 2019 will mark the course’s fourth year, and students have found it so valuable that it is now a mandatory part of the university’s environmental and sustainability studies BA. In fact, Dr. Booth sometimes fields requests to take the course from students in other disciplines, like business and political science, as well as graduate students.

“For some, it’s the first time they’ve had a technical course,” she says. “Students come back and say, ‘That was the best course I took. I learned something useful and I made contacts.’”