Funded by the University of Northern British Columbia and the Hakai Institute, the powerful set of computers show the mass loss of Earth’s glaciers has increased at unexpected rates.

The University of Northern British Columbia is home to a supercomputer that’s giving researchers insight into one of the world’s most pressing issues: climate change.

The supercomputer – technically a series of computers called Klinaklini (named after B.C.’s largest glacier, located in the Coast Mountains between Vancouver and Prince Rupert) – used more than 440,000 images captured by NASA’s ASTER satellite sensor to measure elevation changes on glacierized terrain over time. “It’s equivalent to taking 1,000 modern laptops and running them for an entire year just on looking at satellite imagery and trying to construct elevation change maps,” says Brian Menounos, a geography professor at UNBC and Canada Research Chair in Glacier Change.

Dr. Menounos researchers the response of the cryosphere – a term used for all ice that covers Earth’s surface including lake ice, river ice, permafrost, seasonal snow, ice sheets and mountain glaciers – to climate change. And he spends most of his time studying mountain glaciers, which are sensitive indicators of climate change.

In April, Dr. Menounos, along with a team of international researchers, published a study in the journal Nature outlining the supercomputer’s findings. They found that between 2000 and 2004, glaciers lost 227 gigatonnes (a gigatonne is one billion tonnes) of ice each year. Between 2015 and 2019, the rate of loss increased to 298 gigatonnes per year. 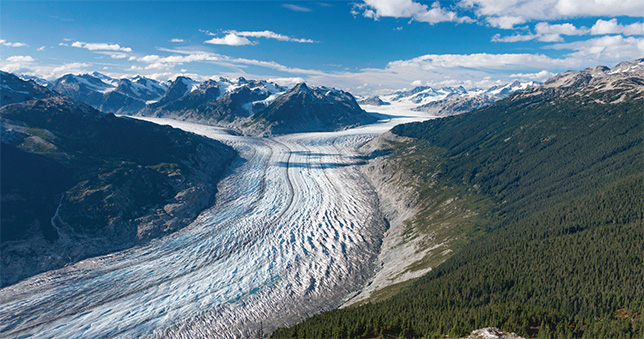 An international team of researchers, including some from UNBC, are mapping how the Klinaklini Glacier, 250 kilometres northwest of Vancouver, is changing from year to year and the impacts it’s having on the environment. Photo courtesy of Brian Menounos.

The loss of ice from glaciers has had an impact on global sea levels. In the last 20 years, about 21 per cent of the rise in sea levels came from glacier change. “We can actually show that glaciers collectively represent a substantial fraction of sea level rise,” Dr. Menounos says. “That’s important because you start talking about having to relocate people on the planet. That’s a great problem for society.”

Since June, climate change hasn’t been far from the minds of B.C. residents. After Lytton, B.C., experienced the hottest day ever recorded in Canada at the end of the month – part of a deadly heat dome that affected much of the prairies – and after fire swept through and destroyed the small village, the impacts of our warming planet have become very clear. Earlier in June, the federal government released a report that provided a look at the effects of climate change on communities, the environment and the economy in Canada, and how the country is adapting to the resulting challenges. “We are experiencing more extreme heat, less extreme cold, longer growing seasons, shorter snow and ice cover seasons, earlier spring peak streamflow, thinning glaciers, thawing permafrost and rising sea levels,” the report states. “Losses from extreme events, such as floods and wildfires, are also increasing.”

Mountain glaciers are an important freshwater resource, he adds. And their retreat can have dire consequences. “When seasonal snowpack has been depleted – that is … the snow from last year or the year before is melted – you get to a situation where the glaciers start to produce their own meltwater, which supplements those rivers. And if you don’t have that buffering capacity of the glaciers, especially during warm, dry conditions, then it produces a lot of stress on ecosystems.” (According to BC Parks, changes could include more rain instead of snow in the winter, earlier spring melts and drier summers.)

Dr. Menounos is trying to spread the message of his research; he has reached out to both the federal government and B.C. government with a summary of his team’s results. He also says the work will likely be featured in the next assessment report of the United Nation’s Intergovernmental Panel on Climate Change.

But the rate of glacial change around the world means that giants, like the glacier Klinaklini, may not have much time left on Earth’s surface. With an area of about 470 square kilometres, Klinaklini is melting; along with its adjacent Ha-Iltzuk icefield, Klinaklini has lost almost 14.5 billion tonnes of snow and ice since 2000, with 9.8 billion tonnes of that melt occurring since 2010. It’s “one of the most beautiful glaciers I’ve ever seen,” Dr. Menounos says. For now, “it’s iconic.”