70 percent of respondents said they had witnessed or experienced racism on campus.

A recent study at Wilfrid Laurier University has found that racialized students, faculty and staff regularly experience racism. The results of the research came as no surprise to the undergraduate students who ran the survey and the faculty mentor overseeing them. “It’s not surprising at all because we do collectively experience these things,” says Paige Grant, one of the students who led the project. “We all know that it’s happening.”

The Being Raced study, conducted by Ms. Grant and students Azka Choudhary, Joey Lee and Kate Harvey, collected 177 anonymous online surveys and 37 confidential interviews from Laurier community members, between December 31, 2016 and July 12, 2017, as part of Laurier’s undergraduate research apprenticeship program. Most respondents, 70 percent, said they had experienced racism on campus. Seventy-six percent said they had witnessed racism at Laurier. According to the study, racism is most likely to occur while in class or walking to class, in residence, talking with professors, in student government and in athletics. Nearly 86 percent of respondents said they do not report racist encounters and do not believe, or are unsure if, administration is genuinely concerned with confronting racism on campus. 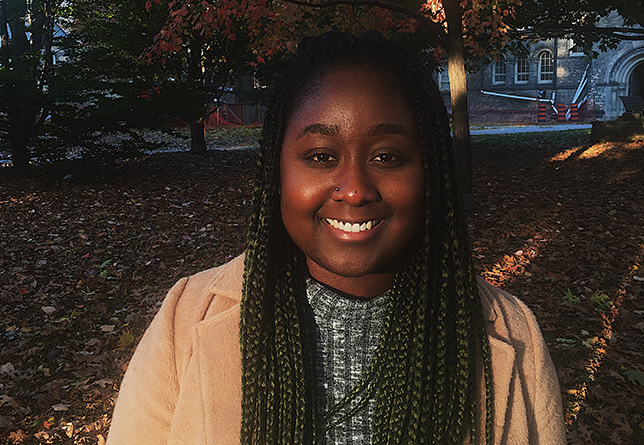 Paige Grant, now a master’s student at the University of Toronto, was part of an undergraduate research team at Wilfird Laurier University that reported on campus racism in the study Being Raced.

Ms. Grant, now a master’s student at the University of Toronto, says the inspiration for the research topic came from lived experience and seeing a lack of diversity on campus. She says she and the other student researchers had each experienced racism in some way, and felt the university would only listen to them if their experiences were presented as research data. “Even if they know that racism is happening, even if they know that students, staff and faculty are experiencing this, the only type of validation that they consider, really, is research, is through a report like this,” she says.

Being Raced lists nearly 40 calls to action for administration, faculty, residences, student government and athletics. They range from simply acknowledging the existence of racism on campus, to building support systems for racialized students, to conducting mandatory anti-racism training for members of student government and athletic staff. Of all the recommendations listed in the report, Ms. Grant says the first thing Laurier should do is hire more racialized faculty and staff.

Vanessa Oliver is an associate professor in the faculty of liberal arts at Laurier. She was the group’s mentor for the project and agrees that hiring faculty and staff who reflect the diversity of the student body would be helpful. She says the study results show that most professors aren’t even aware when these racist incidents occur in their classrooms and offices, or elsewhere around campus. “I think folks are well intentioned but … especially for professors who are white, [our] white privilege protects us from having to know what the experience of racism looks like and feels like,” Dr. Oliver says. Implementing mandatory anti-racism training for faculty to help them understand how they perpetuate racism would be an important move, she adds. 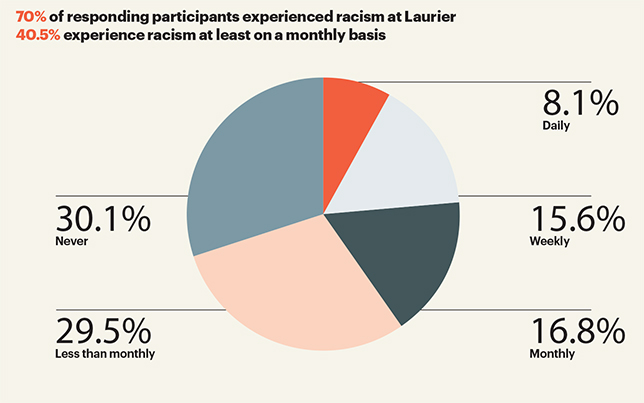 Pamela Cant, Laurier’s assistant vice-president of human resources and equity, says the university welcomes the report’s findings and calls to action, and that there is ongoing equity, diversity and inclusion (EDI) work happening Laurier. “I think the information contained in the report provides some really important insight,” she says. “Racism is something that exists on university campuses and unfortunately in society as a whole. That’s really important for us to acknowledge … and realize that we need to take proactive steps in order to ensure that we have an inclusive community here at Laurier.”

The university has appointed two EDI faculty colleagues to look at improving the experience of all underrepresented groups, Ms. Cant says. Laurier also recently hired a senior advisor of equity, diversity and inclusion who will be dedicated to developing “institution-wide strategy and initiatives around equity, diversity and inclusion and anti-racism will be a big part of the mandate for that position.”

Ms. Grant says she and her team of student researchers presented the report to university administration, which included Ms. Cant, before the official launch of Being Raced in September. She hopes the report brings change to Laurier, without the university needing to conduct further research. “This was way too much labour for racialized people to [take on]. It wasn’t enough to say we’re experiencing it,” Ms. Grant says. “It’s 2019. It’s so hard to prolong this inclusion and diversity talk. Things need to happen.”