The centre will serve as home to the university’s world-renowned joint degree in Indigenous law and common law.

A new addition to the law school at the University of Victoria will become the permanent home to the institution’s JID/JD program. The joint degree in Indigenous law and Canadian common law, which launched in 2018, is the first of its kind in the world.

With funding from both the federal and provincial governments, the National Centre for Indigenous Laws (NCIL) will meet the needs of the growing program. By the time construction on the building is complete in 2023, the program will have 100 students enrolled and counting.

“We met with local community members from the peninsula and asked people, ‘What’s important about the building that would enable you to feel welcome when you come into it?’” says Val Napoleon, director and co-founder of the JID/JD program. “We wanted it to reflect West Coast Indigenous peoples’ cultures, but also to have it inviting and open to other Indigenous cultures, because we have students from across Canada.” 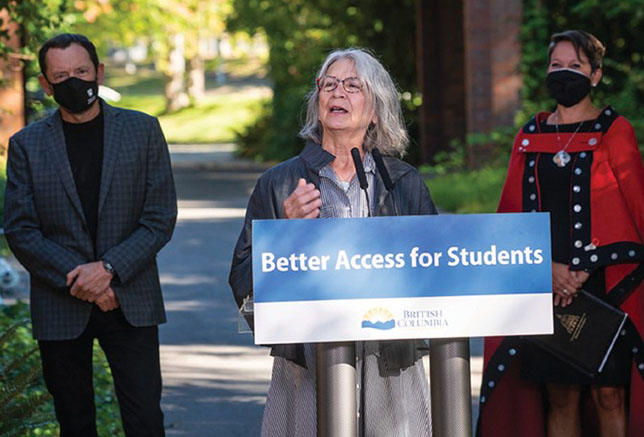 The NCIL will also be a resource hub for Indigenous law scholarship, something Dr. Napoleon says will provide a “public invitation to have national conversations.” It’s also a reflection of the reputation the program has already garnered around the world. Prior to the pandemic, Dr. Napoleon spent three weeks in New Zealand consulting with Maori colleagues about creating a Maori law degree. She’s also had interest from Indigenous peoples in Australia, Norway and Peru.

The program covers the law, language and the cultural traditions of various Indigenous peoples in Canada, as well as the history and lasting effects of colonial laws and policies. “As a First Nations person from a small region, I never even thought law school was an option for a very long time,” says second-year law student Laura Hoversland, who entered the program with a background in Indigenous law, advocacy and policy work.

Ms. Hoversland says that, along with her lived experience, has had an impact on important conversations in the classroom. “At the beginning of first year, there were legal classes where we mingled with the regular JD students, and we talked about things like the Truth and Reconciliation Commission,” Ms. Hoverland says. “I really highlighted to people who didn’t have the work experience or were not First Nation, ‘You need to take this seriously, because whatever role you’re in, your decision and feeling on the Calls to Action and the terminology will affect my daughter.’”

When the program first started, Indigenous law was on the rise in schools across the country. Dr. Napoleon says the way that JID/JD students are excelling after graduation is further proof of its relevance. “There’s very little that happens in Canada that doesn’t involve Indigenous peoples… nowadays, for lawyers not to have a background in Indigenous law, it’s an incomplete education,” she says.

Dr. Napoleon, who is a member of Saulteau First Nation, says the NCIL feels like a continuation of a dream that began hundreds of years ago, for her own relatives and other Indigenous peoples. “One of our prophets said there was a safe place we could go to … and people travelled across Canada and found [that place] in Northeastern B.C., and it was a place of sanctuary,” she says. “So this building, it’s like a metaphor of that kind of sanctuary for our laws – laws that enable us to be a people, in the fullest sense of the word.”