International students stranded on campus are trying to make the best of it for now, but don’t know what the future holds for them.

Eunah Cha has a four-bedroom suite all to herself at the University of Alberta. While the extra space was fun at first, the novelty quickly wore off. “It gets a little bit lonely sometimes. It’s very quiet in residence. … I feel that emptiness.”

The second-year nursing student came to study in Canada from Korea, one of the first countries to be hit when the COVID-19 pandemic spread around the world. Ms. Cha was unable to go home at the time and now she’s grounded in her residence. 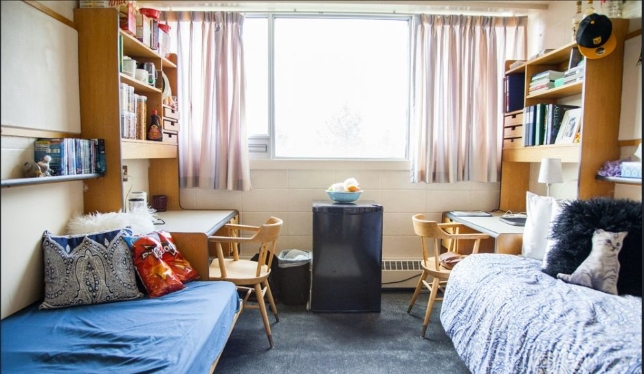 A University of Alberta residence room. Photo courtesy of UAlberta.

With many schools are taking precautions against the spread of COVID-19, such as moving students into single rooms with private washrooms and ensuring meal service is take-out only, students have become more isolated. While that’s good in terms of public health, it can make for a lonely experience.

Saad Farooqi found himself nearly stranded at the University of Windsor last month when the city transit service was reduced and it became hard for him to get basics like groceries. “I was feeling lonely and depressed as I couldn’t go out, hang out with friends, look for a job to earn money or take classes, which was the sole purpose of me being in Canada,” he said. Mr. Farooqi managed to find a flight back to Pakistan in the middle of April and finished his classes and exams online.

However, many international students aren’t sure when they’ll be able to head home again. At Columbia College in Vancouver, Carlos Canovas tries to speak with his parents in Spain every day. He hopes to visit home at Christmas, though he’s not sure when travel will be possible. Mr. Canovas tries not to worry about that. “If I’m going to be in a different country and out of my comfort zone, I’m going to try to have the best experience. I’m living under these circumstances, so I’m trying to be positive.”

Mr. Canovas is able to work and has kept up his job at a bank. Though he doesn’t qualify for federal emergency funds, he says he feels lucky to be in Canada now, despite the distance from his family. “Even though we are not citizens, I guess we are contributing to the economy and we are part of the society right now while we are here in Canada. So I feel very blessed to be here. They are really helping us.”

While Mr. Canovas is working, many students who were counting on summer jobs are now in a state of limbo. In early April, a coalition of student associations called the Undergraduates of Canadian Research Intensive Universities released a survey showing that nearly 75 percent of respondents were worried about finances. International students are not eligible for the Canada Emergency Student Benefit, although they can apply for the Canada Emergency Response Benefit if they fit the eligibility requirements.

Paul Davidson, president of Universities Canada (publisher of University Affairs), said his association has been working closely with the federal department of Immigration, Refugees and Citizenship Canada to extend student visas for those already in Canada, and to ensure international students are eligible to work while they’re here.

At Thompson Rivers University, Baihua Chadwick, associate vice-president, international, said international students can face many challenges, including financial stress. “Many of our students were working part-time, including as employees of TRU’s campus ancillary services. With all of the university’s catering and conferencing events cancelled, and some students’ families’ businesses impacted by COVID-19, the financial challenges facing some of our international students are very real.”

Many universities are coming up with their own solutions to help international students financially, although these initiatives can vary greatly based on where the school is based, the size of its student body and their financial realities. Cape Breton University has started the Perseverance: Student Relief Fund, which is open to international students. McGill’s international health plan is valid until the end of August for students who have to stay in Canada. And, along with emergency financial assistance, TRU’s Student Union has a food bank for those who can’t afford groceries.

Janice Johnson, assistant dean of students in residence at U of A, said while the delivery of certain services may have changed, at its core, residence life is about community and connectedness, and that’s something that staff are trying to retain for the students still on campus. “A residence community is a connected community. Residents are still having hallway conversations (from their doorways with the person four doors down) and student staff are doing regular, individual check-ins to see how people are doing.”

One of those staff members is nursing student Ms. Cha, who is a resident assistant. She’s helped to organize virtual dance workouts and online trivia contests. Residents are also staying connected through events like virtual paint nights. “Residents could come pick up paint and brushes on their own and then everyone could paint along from their rooms.” It’s as close to normal as they can have right now, she said.

If travel is allowed by the fall semester, Mr. Davidson said schools are also looking at ways to house these students safely. “Should international students require a period of self-isolation, can we equip our campuses to accommodate that, or can we make arrangements with local hotels?”

As for Ms. Cha, she’s not sure what the future holds. She has managed to find a flight back to Korea in a few weeks and says if her summer job is cancelled and the fall semester is taught online, she doesn’t know when she’ll be back.