What’s behind the unprecedented labour disputes on Alberta campuses

A combination of factors has contributed to a pair of faculty strikes, with more possibly to come.

Before this year, Alberta had never seen a strike by university faculty members. Then, not even one week into 2022, the 82 faculty at Concordia University of Edmonton hit the picket line, despite -40 C temperatures, making history in their province.

That strike lasted 11 days. But another was close behind. Mediation talks at the University of Lethbridge broke down, paving the way for a strike on Feb. 10. Faculty were still on the picket line in early March, but their union has announced a series of mediated talks with the university that will begin around the middle of the month.

There was also the prospect of a strike at Mount Royal University, until mediation led to an agreement on Feb. 14 that was subsequently ratified. Meanwhile, at the beginning of March the University of Alberta was in mediation with its faculty association (a potential settlement was in the works at press time) and Athabasca University was also headed that way, although it continued to prepare for a possible strike.

To understand why there is so much labour unrest at Alberta universities, the easiest place to start is 2017. That’s the year that the Alberta government, then under Rachel Notley’s New Democratic Party, extended the right to strike to postsecondary faculty and other academic staff in response to a 2015 Supreme Court ruling. That has resulted in unions and universities needing to figure out a different way of approaching one another in collective bargaining, said Bill Werry, executive director of the Council of Post-Secondary Presidents of Alberta. “What we’re seeing now is a result of the overall bargaining climate shifting from a climate that was really quite strongly relationship-based,” said Mr. Werry. “Both sides now have a tool in their toolkit that they didn’t have before. And I think you’re seeing a testing out of that.” 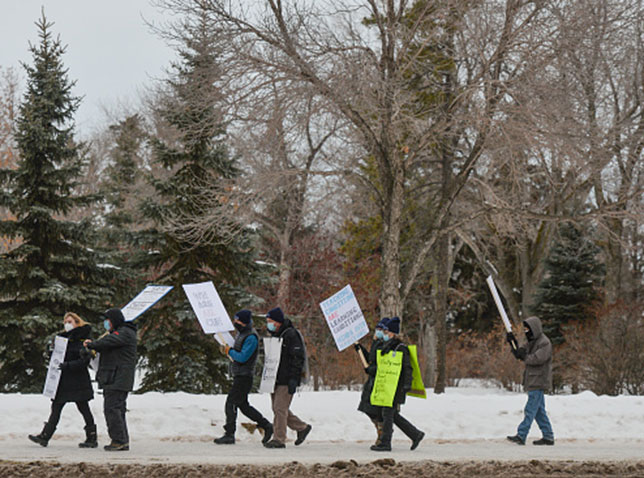 Members of the Concordia University of Edmonton Faculty Association (CUEFA) on a frosty Friday morning. The strike is entering its second week, and early discussions have stalled due to wage and workload disagreements. On Friday, January 14, 2022, in Edmonton, Alberta, Canada. Photo by Artur Widak/NurPhoto via Getty Images.

The effects of COVID-19

And then there is the not-so-small matter of the pandemic. Several universities were due to negotiate new collective agreements when COVID-19 hit in early 2020, diverting everyone’s attention and pulling negotiations off the front burner.

Larry Savage, a labour studies professor at Brock University, said it’s rare to have so many active or potential labour disputes ongoing, and not only in Alberta. He pointed to recent strikes at Ontario Tech University and Nova Scotia’s Acadia University as well, saying the unexpected extra workload created by the pandemic has played a role. (Professors and librarians at Université Sainte-Anne in Nova Scotia also recently walked off the job.)

“People feel they’ve gone above and beyond to deliver a high-quality educational experience,” said Dr. Savage, who has conducted research on university faculty associations and found there is increased labour militancy among them in response to external economic and political pressures. “They’ve moved their courses online. They’ve put in all sorts of extra work and they’re not seeing the reward for it. That breeds resentment.”

Higher education consultant Alex Usher also pointed to workloads and the isolation and alienation created by the pandemic as contributing factors. “Situations that would in normal times be defused simply and amicably if everyone could just get more sleep and occasionally be in the same room with each other for a friendly coffee are simply going a different way in Winter 2022,” he wrote in a February column.

In addition, Alberta universities have faced significant provincial austerity measures, which were first brought in by Premier Jason Kenney’s United Conservative Party government in the fall of 2019 to curb successive annual deficits. The University of Lethbridge, expressing concern about the impacts of the ongoing strike, said in late February that it had seen a 20 per cent cut to its provincial funding since 2019, amounting to a loss of $21 million. Its tuition fees rose 21 per cent over the same period, after the Kenney government ended a tuition freeze.

Although observers have said the university and the union are not that far apart in their negotiations, such cuts are “absolutely a factor at the table,” said Daniel Paul O’Donnell, president of the University of Lethbridge Faculty Association. (Other concerns include potential restrictions on faculty participation in collegial governance processes, he said.) His and other unions have accused the Alberta government of interfering with collective bargaining under its Public Sector Employers Act. It allows the government to set financial and term limits that public sector employers must follow during bargaining. The limits do not have to be disclosed to a third party. Advanced Education Minister Demetrios Nicolaides said in a written statement that his government “sets the mandate” for postsecondary institutions, which is then carried into bargaining, but the government does not participate in day-to-day negotiations.

Faculty at Mount Royal University had squared off against its board of governors over reported issues of workload and pay. In the end, they reached a four-year collective agreement to 2024 with a 3.25 per cent increase in salary and benefits. The faculty association at Concordia University of Edmonton reported gains in salary, improvements to faculty workload – a top issue, the union said – job security protections, and preservation of intellectual property ownership.

Having the right to strike, “made an incredible difference, especially in a place like Alberta,” said Glynis Price, president of the Concordia University of Edmonton Faculty Association. While her union is small compared to most other faculty associations, the fact that they were the first ever to strike caught the attention of other unions, some of whose members joined them on the picket line.

“Faculty associations in Alberta have typically been fairly insular,” said Dr. Price. “The last three or four months, we’ve definitely seen an increase in the number of meetings, in the number of emails that are going back and forth. That’s one of the best things that could have come out of any job action in Alberta, that we talk to each other.”

University presidents and boards are also finding that they need to “up their game,” in terms of acquiring new tools and skills, including relationship-building with employees and effective communications, to adjust to the shift presented by the right to strike, said Mr. Werry.

All strikes have “residual impacts,” he added. “We need to make sure that we’re learning from the kind of challenges that do occur.”