In September, administrators at the Emily Carr University of Art + Design in Vancouver made an unusual decision – to cancel classes for the September 27 Global Climate Strike march.

“It was an extraordinary decision. There’s no question,” says the university’s president, Gillian Siddall.

Dr. Siddall consulted widely on how to handle the climate strike, canvassing the faculty association, the Canadian Union of Public Employees, the student union and the senate. All were in agreement, she says.

“We just decided it was cleaner to cancel classes so all students would be free to attend without worrying about being penalized,” she says. “This is obviously a crisis that is affecting the entire planet. We felt it was really important to facilitate our students’ participation in that, and our faculty and staff.”

Several Canadian universities encouraged faculty to cancel classes if they could or to accommodate students who wished to attend the strike, and at least one other institution, Concordia University in Montreal, also cancelled classes during the march. In a news release posted on the Emily Carr website a few days before the climate strike, Dr. Siddall announced that afternoon classes would be cancelled. 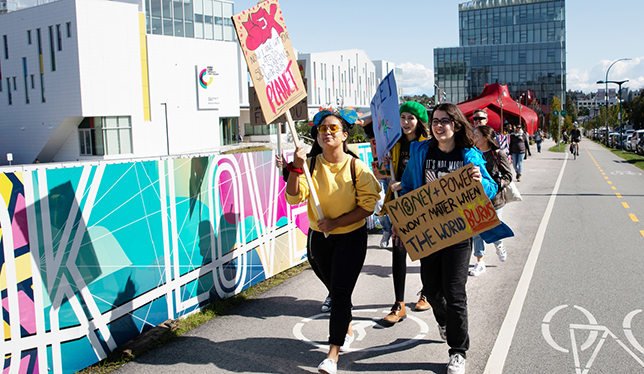 “We know that many of you care deeply about this global priority and have taken action in your daily lives,” she wrote. “Some of you have created work that engages with pressing environmental concerns, or have produced research that tackles questions about the future of our planet.”

Student union representative Maddy Phillips says her teachers had already told her it was OK to skip class for the strike, but having the university’s official backing was important to her.

“I love the fact Emily Carr gave permission, so students wouldn’t have to ask their teachers. It dissolved potential conflicts,” says Ms. Phillips, who met up with fellow students on campus and walked with them to the start of the march.

Ms. Phillips, in her final year of a degree in communications design, says this is not the first time the university has thrown its support behind student environmental activism.

Earlier this year, she and a couple other students helped organize an exhibition as well as a five-day campaign to draw attention to waste on campus. She led a panel discussion on waste that included faculty, and worked with facilities staff to collect a day’s worth of garbage from campus. She and her team then sorted the waste according to type – pop cans, paint jars, Styrofoam takeout containers, even food waste – and laid it out on a tarp in a high-traffic area. 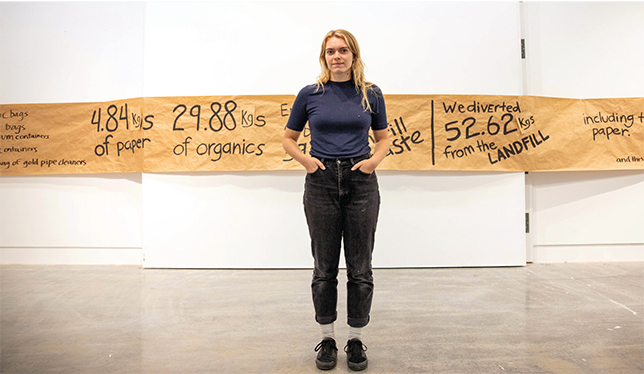 Maddy Phillips organized events including a climate march and the exhibition Let’s Talk About Waste, pictured in the background. Photo by Perrin Grauer.

Some students told Ms. Phillips the exhibit inspired them to eat their food in the cafeteria, rather than order it for takeout. Others asked to take various pieces for their own art projects.

“It was really impactful, and the administration was very supportive,” she says.

Meanwhile, Dr. Siddall is leaving the door open to future class cancellations. “There is always a lot to consider when you’re making a decision like that,” she says. “But if the circumstances were right, yes, we would do it again.”

The Vancouver Police Department estimates that 100,000 people participated in the protest on September 27, adding to the millions around the world who took to the streets in protest as part of the Global Climate Strike.