Mothers are feeling the burn of having to both work and take on most parenting duties.

This article is republished from The Conversation under a Creative Commons license. Read the original article.

Before COVID-19, I used to spend a lot of time feeling like the Cat in The Cat in the Hat. I was holding a cup, the milk, the cake and a little toy ship, while bouncing up and down on a ball.

I am a tenured professor and a scientist. I have a lab, grants and grad students. I write academic articles and I teach, and I’m in the midst of writing a book.

I am also a mom. So, I cook, clean and nurture.

Before this pandemic, I already had my hands full and I often wondered what would finally make me fall off the ball. But I never thought it would be a virus, especially one I haven’t even contracted.

For the past 62 days, I have been staying at home around the clock with my wonderful partner and our delightful six-year-old son. I would say that I have been working from home, except that very little scholarly work gets done with a six-year-old underfoot, unless he is glued to a screen. I know I’m lucky to still have a job and a healthy family, but COVID-19 is taking a toll.

That my research has been brought to a near standstill by a virus is almost ironic because I study microbes, albeit the “good” kind that benefit their hosts.

Many academic moms I know — and some dads too — are also feeling the strain, and we are not alone. With schools and daycares closed in many places, lots of parents are struggling to work effectively from home. But it may be particularly hard for women, especially if they are doing the lion’s share of parenting, homeschooling, or other forms of care-giving during this pandemic. 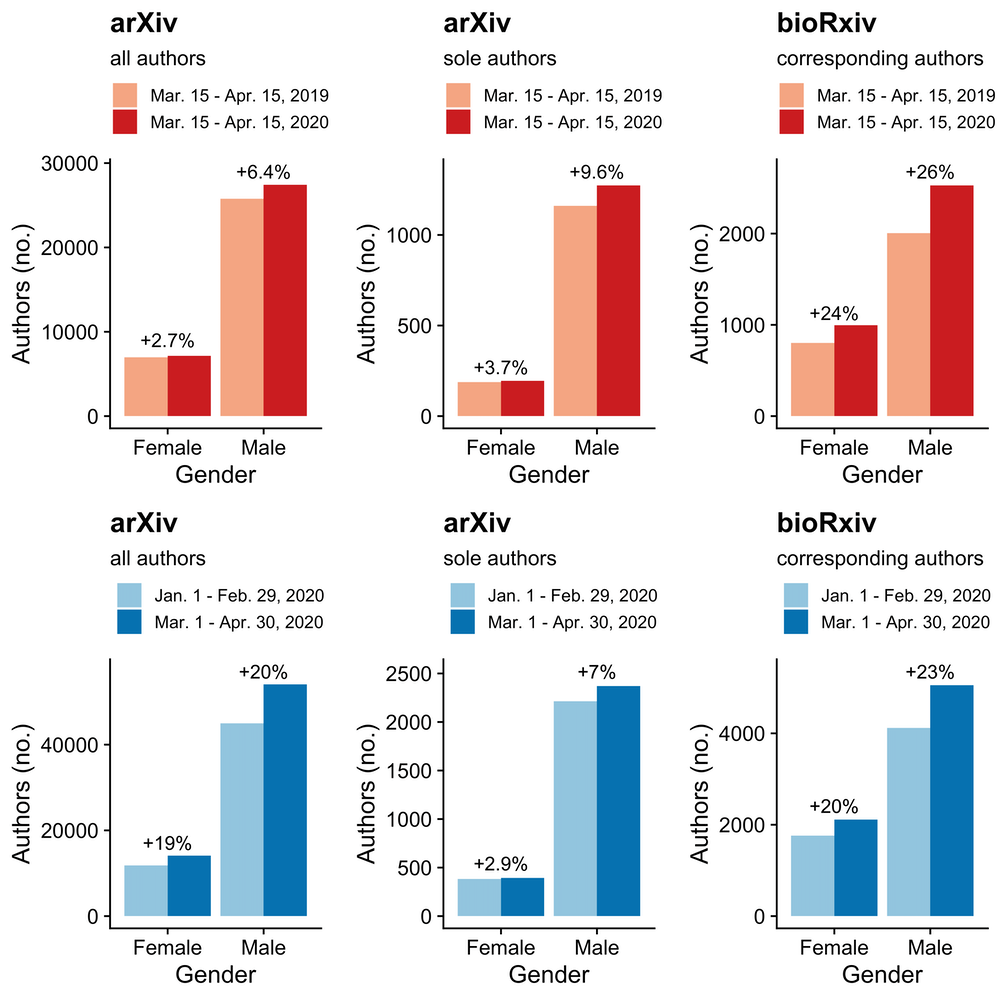 Even if women split childcare duties evenly with a supportive partner (like mine), we are still competing with many men who do way less at home. One study of scientists found that men were four times as likely as women to have spouses who work only part-time or not at all. And that was before more women than men lost their jobs because of COVID-19.

Digging in to the data

The scientist in me wondered whether I could measure the pandemic’s effect on the productivity of male and female researchers. It might still be too soon to see any effect, since research and peer review typically take months or even years. But growing numbers of academics upload their submitted or in-progress manuscripts to preprint servers (a platform for articles that have yet to undergo peer review), meaning it might just be possible to measure the pandemic’s effect on research productivity in real time.

As a woman in STEM, I was particularly interested in the pandemic’s effects on STEM fields, so I downloaded submission data from arXiv and bioRxiv. Together, these two preprint servers cover mainly biology, math, physics and computer science. I then inferred the gender of preprint authors using a software package. While not perfect, similar approaches are often used to measure gender bias in large datasets.

Some of the gender differences are modest. Just a percent or two. But then again gender is far from the only variable influencing research productivity during COVID-19.

My analysis is available on GitHub — the analysis has not been peer-reviewed though, so it is only preliminary.

I did consider writing it up as a formal manuscript, but I can’t spare the time right now for a side project. And by the time I have childcare and free time again, someone else will probably have beaten me to it.

Odds are it will be a man.

A reporter at Nature asked me what the solution is, and honestly, I was stumped. I firmly believe that the decision to re-open schools and child care should be grounded in science, and we still do not know how often kids transmit COVID-19.

Gender imbalances in care-giving and domestic labour are notoriously slow to change, and will almost certainly outlast this pandemic. As a New York Times writer recently put it, many “men embrace gender equality, but they still don’t vacuum.”

So it falls to universities and funding agencies to somehow deal with the gendered impacts of COVID-19 on academic research. Harvard University has offered money for babysitters to their professors with kids, but babysitters don’t really jibe with social distancing. Universities could treat the pandemic as something like a parental leave for faculty or others with young children, but men sometimes benefit from this kind of family-friendly policy more than women. I don’t know what else to recommend, though, and I doubt there are any easy solutions.

For now, I will just try my best to climb back up on that ball, and see how much I can juggle. I will remember to count my many blessings, because a few less papers is nothing compared to the lives and livelihoods lost because of COVID-19. But a part of me will always wonder what discoveries women scientists might have made were it not for this pandemic and the setback it is causing to the hard-won progress of women in STEM.

Megan Frederickson is an associate professor of ecology and evolutionary biology at the University of Toronto.