Who knows what Doug Ford’s government has in store for higher-ed in Ontario?

With a controversial pick leading the Ministry of Training, Colleges and Universities, don’t hold your breath on big ideas or transformative change for the sector.

Fifty-three years ago, a Progressive Conservative education minister unleashed what is still the most significant transformation of higher education in Ontario. Bill Davis pushed legislation to create the community college system, which diversified the provision of education and training and laid the foundation for the dramatic expansion of postsecondary access that has made Ontario a leader in educational attainment internationally.

Ontario Premier Doug Ford and his cabinet were sworn in on Friday, June 29, and many in the higher education community are wondering what this new government will bring to the sector. Wherever they fall in the political spectrum, however, no one is holding their breath in anticipation of big ideas or transformative change. 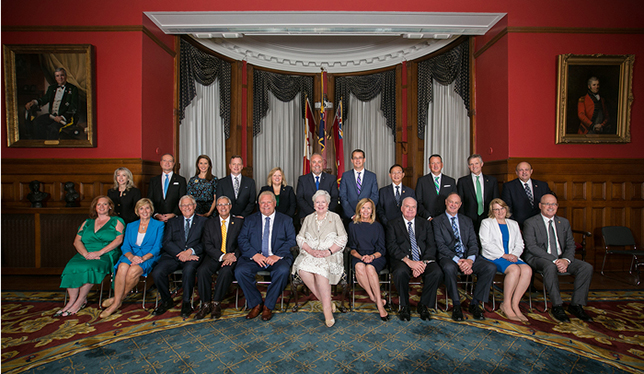 Ontario premier Doug Ford and cabinet to be sworn-in on June 29, 2018.

If Mr. Ford’s campaign was notoriously short on details in general, all it had to say about higher education in particular concerned “protecting free speech on university campuses.” Claiming that there are “numerous examples of individuals in Ontario being reprimanded for engaging in free speech,” his platform proposes to tie postsecondary funding to a complaints and investigations process run by the Higher Education Quality Council of Ontario (HEQCO). This essentially parrots a similar proposal in Andrew Scheer’s campaign for the leadership of the federal Conservative Party, who in turn imported the idea from the United States, where it has percolated for decades.

In an eyebrow-raising move, Mr. Ford appointed MPP Merrilee Fullerton to lead the re-christened Ministry of Training, Colleges and Universities (MTCU). A family doctor who campaigned on improving health care and supporting high-tech in her Ottawa riding of Kanata—Carleton, among other PC go-tos, Dr. Fullerton gained notoriety this year for controversial tweets criticizing face-covering by Muslim women, making assertions about the dangers posed by second-generation immigrants and sharing a Breitbart News article about an anti-Muslim rally. Further, she has blogged indicating that foreign doctors should be surveilled as a counter-terrorism measure. She was backed by the party and issued no apology for her remarks.

These facts may well be unrelated; MTCU might just have been the right ministry for a new MPP to join the premier’s cabinet as it is not one of the central files in the provincial government. However, the optics are provocative and will likely spark acrimonious debate should Mr. Ford’s notion of protecting free speech gain traction.

Essentially, this agenda is obviously not about higher education, but about taking political advantage of the contemporary culture wars that manifest in campus free speech controversies. Even if one took at face value the party’s interest in free speech, an evidence-based case can hardly be made that freedom of expression is under attack in universities, calling for government to step in. This is a terrain dominated by sensationalism and overgeneralizations, not concern for real problems among the many that students and institutions face.

In the real world, there are plenty of substantive questions that one wishes the new government has put some thought into. How will the province’s university funding model evolve as MTCU has for years worked towards aligning it with outcomes and institutional differentiation? What will postsecondary funding look like as Mr. Ford promises to cut $6 billion in government spending? How will the new Université de l’Ontario français, established by Kathleen Wynne’s government, fare under Doug Ford now that work to get it off the ground has begun?

We have no clue into the answers to these questions, nor whether the new government has a starting position on them to work from. In the current context, the manifest Progressive Conservative agenda on higher education is one of scoring cheap political points by appeasing those who are not familiar with, are alienated from, or have an axe to grind with universities. That is unfortunate not just for universities but for the quality of our public debate about higher education, as we become entangled in diversionary agendas rather than the substantive issues the province needs to address.

Creso Sá is the chair of the department of leadership, higher, and adult education as well as a distinguished professor of science policy, higher education, and innovation at the University of Toronto. He is also the editor of the Canadian Journal of Higher Education.
COMMENTS
University Affairs moderates all comments according to the following guidelines. If approved, comments generally appear within one business day. We may republish particularly insightful remarks in our print edition or elsewhere.