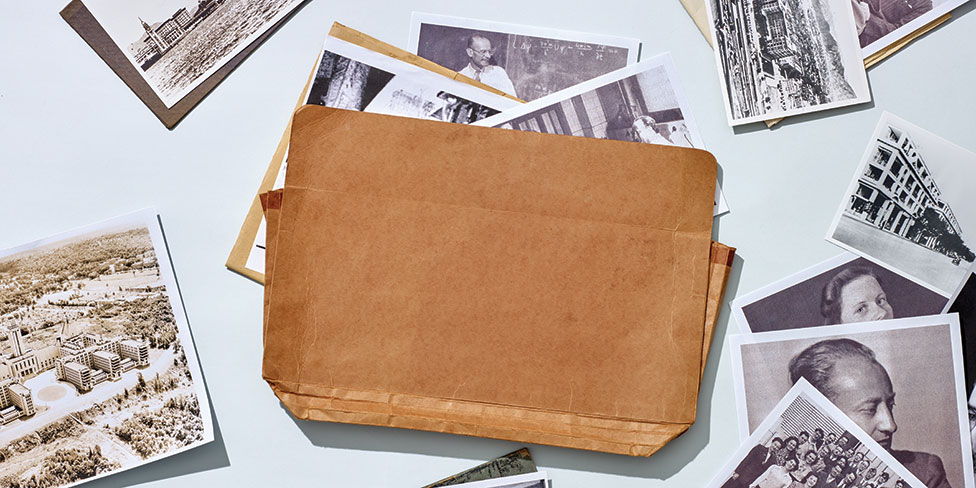 A look back at the WWII nuclear lab at the Université de Montréal.

This is a summary of Un laboratoire secret tiré de l’oubli.

For over two years during World War II, important research in nuclear physics was conducted at a secret lab in Montreal. Though it was gradually forgotten in the years after the war, this work had a major impact.

In November 1942, Hans Halban, a French physicist of Austrian origin, arrived in Montreal after crossing the Atlantic in a seaplane. His mission: to build a nuclear physics lab from scratch in Montreal. He worked briefly at McGill University before finding his place at the Université de Montréal (U de M), setting up on two floors in the Roger-Gaudry pavilion. The building had just been completed and was still largely unoccupied — making it an ideal choice for work that needed to be kept secret.

This was not Dr. Halban’s first rodeo. In May 1940, he had travelled to England with his colleague Lew Kowarski to escape the German occupation of Paris. Along with his wife and daughter, he had also brought cans of heavy water and a gram of radium hidden in his luggage.

“The Montreal Laboratory had a dual civilian and military objective,” explains Gilles Sabourin, a nuclear engineer and author of the book Montréal et la bombe. “The goal was not to build a nuclear bomb, but to produce fissile material that could be used in such a weapon.”

Why did these European researchers come to Montreal in 1942? “At the time, the U de M wasn’t really doing basic research in physics. The department’s main purpose was to provide basic physics courses for medical students,” notes Richard Leonelli, current director of the university’s physics department.

In 1942, the race to develop the nuclear bomb was well underway. The Germans had their Uranium Project, and the Americans had the Manhattan Project. The British were no exception with their Tube Alloys initiative, associated with Cambridge University. The Manhattan Project eventually merged with the Tube Alloys project, and their collaboration resulted in the production of atomic bombs. After the Germans invaded France, the United Kingdom feared that it might face the same fate, so the British were eager to send their research talent across the Atlantic.

The United States was their first choice but the American government refused, fearing the risk of espionage. Canada responded more favourably to their request. Montreal had two large universities (McGill and the U de M), a modern airport, an extensive railway network, and was more suitable for confidential work than Ottawa, which was home to many embassies (i.e. nests of spies). These characteristics made it an attractive place to establish the laboratory, as Mr. Sabourin explains in his book.

Specialists in atomic physics aren’t exactly a dime a dozen, and many of them were already working with the Americans. Dr. Halban would eventually recruit George Placzek, a Czech physicist who had worked with the illustrious Niels Bohr on uranium-235, as well as Pierre Auger from France, Italian physicist Bruno Pontecorvo, Canadian nuclear physicist George Laurence, and Quebec physicist Pierre Demers.

The group also included a number of women with a knack for mathematics, like Joan Wilkie, Gilberte Leroux and Fernande Rioux, whose work as “calculators” is too often forgotten. These women were the computers of their time. They performed a large number of mathematical operations each day that were essential to the work being done in theoretical physics. Mathematician Jeanne LeCaine-Agnew is another woman whose contribution deserves to be better known. She was a member of the team of physicists and mathematicians who laid the foundations for the physics of the nuclear reactors still being used today.

The Laboratory and the bomb

To understand the Montreal Laboratory’s contribution to the development of nuclear weapons, we need to look at the research that was conducted there. Natural uranium contains large quantities of uranium-238 and a very small proportion (0.7 percent) of uranium-235, which are related isotopes. But only uranium-235 is fissile, meaning that its nucleus breaks apart when a neutron collides with it.

To build a bomb, then, the first step is to separate the uranium-235 from the uranium-238. The separation process is slow and expensive. There is an alternative, however. When uranium-238 absorbs a neutron, it transforms into plutonium 239, which is fissile and can release the
energy needed for a bomb. The Montreal Laboratory developed a nuclear reactor known as ZEEP (Zero Energy Experimental Pile) in which plutonium was produced using heavy water as a moderator. This water, in which hydrogen is replaced by deuterium, is used to keep the nuclear fission reaction under control.

Mr. Sabourin explains that this method of plutonium separation was used after the war in the Chalk River reactor in Ontario. However, it did not lead to the development of nuclear weapons. The work was limited to the production of fissile nuclear material.

Even so, the Montreal Laboratory did indirectly contribute to the proliferation of nuclear weapons. “Many British and French researchers went back to their countries after the Montreal Laboratory shut down and played important roles in civilian and military nuclear programs,” adds Matthieu Lavallée, coauthor of Projet Manhattan : Montréal au coeur de la participation du Canada à la bombe atomique américaine.

Birth of an industry

However, the Montreal Laboratory’s biggest impact was an increase in physics research at Canadian universities, and the emergence of a powerful civilian nuclear industry in Canada. Pierre Demers contributed to the development of the first nuclear reactor at Chalk River Laboratories. He went on to teach at the U de M until 1980. Specializing in particle ionography — a research method for investigating the nature of elementary particles — and in the study of cosmic and solar radiation, he was an ardent defender of doing science in French. He always claimed that he was unaware of the connections between the Canadian laboratory and the development of a nuclear bomb. In a poignant interview with Radio-Canada in 2016, when he was 101 years old, he said that he first learned of those connections after the bombing of Hiroshima. 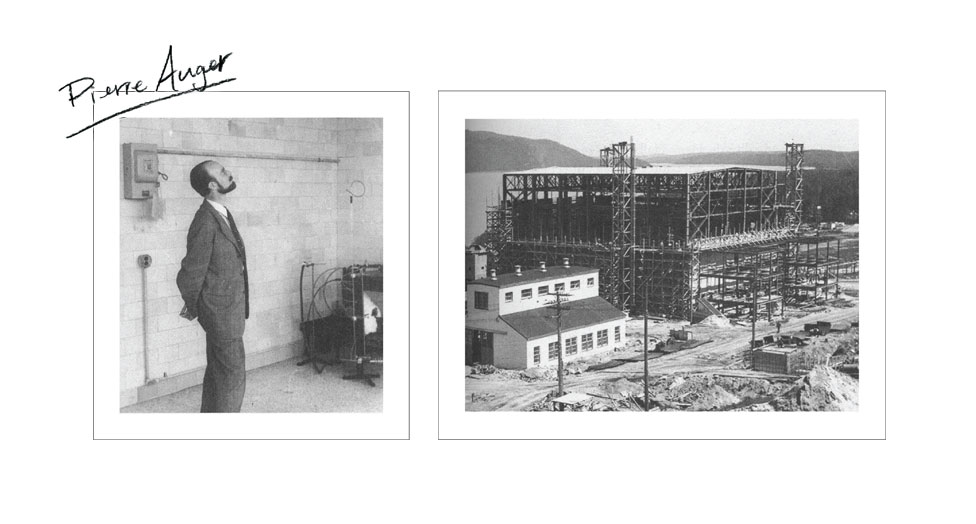 Left: French physicist Pierre Auger was one of a handful of international specialists in atomic physics, in addition to two Canadians, who were recruited to work at the Montreal Laboratory. Right: The Montreal Laboratory developed the ZEEP nuclear reactor, which was built at the Chalk River Laboratories in 1945. Photos courtesy of Montréal et la bombe.

Jacques Hébert, a Quebec native who authored six reports for the Montreal Laboratory, later taught physics at the University of Ottawa
for over 40 years. Another former member of the laboratory, George Volkoff, helped to transform the physics department at the University of British Colombia into one of the best-known in the country. In 1939, he predicted the existence of neutron stars before they had been observed, in an article co-written with J. Robert Oppenheimer. In honour of his contributions to Canadian physics, he was named an Officer of the Order of Canada in 1994.

“After the war, Canada developed expertise in producing electricity with nuclear power plants, but more importantly, it became a pioneer in the production of radioisotopes used in nuclear medicine,” Mr. Lavallée explains. In 2009, Chalk River Laboratories provided at least 40 per cent of the radioactive isotopes used in medical imaging worldwide.

Chalk River Laboratories, which officially opened in 1945, was also where the CANDU reactor was developed, considered to be one of the world’s safest designs. About 30 of these reactors are still operating worldwide, according to the Canadian Nuclear Association.

Despite its impressive heritage, the Montreal Laboratory was quickly forgotten by most. “All that remains at the Université de Montréal is a commemorative plaque on an outside wall of the Roger-Gaudry pavilion,” notes Julie Cordeau-Gazaille, the university’s press officer.

But knowing the history of the Montreal Laboratory is essential to understanding how Canada was able to develop a major civilian nuclear industry. “We’re not a major power,” says science historian Yves Gingras, who also focused on this period in his book Histoire des sciences au Québec de la Nouvelle-France à nos jours, published in 1987. “We weren’t destined to become a major player in the nuclear industry. Only a confluence of circumstances linked to the specific contingencies of the war triggered the rise of the nuclear industry in Canada. As always, knowing the past helps us to understand the present.”

PUBLISHED BY
Jean-François Venne
Jean-François Venne is a Montreal-based journalist specializing in education, research, innovation and business.
SEE SIMILAR STORIES
COMMENTS
University Affairs moderates all comments according to the following guidelines. If approved, comments generally appear within one business day. We may republish particularly insightful remarks in our print edition or elsewhere.