“There is very little that can’t be translated into dance,” says U of Alberta physicist Pramodh Senarath Yapa, who took home “best overall” in Science’s Dance Your PhD contest.
BY MEAGHAN HALDENBY
MAR 19 2019 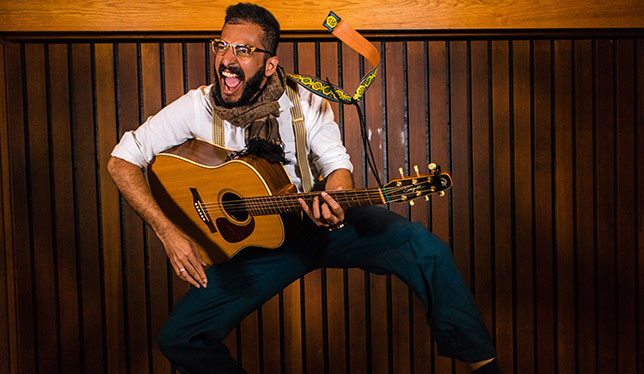 “There is very little that can’t be translated into dance,” says U of Alberta physicist Pramodh Senarath Yapa, who took home “best overall” in Science’s Dance Your PhD contest.

A swing dancer, musician, scientist: Pramodh Senarath Yapa does it all. And the PhD student at the University of Alberta put his range to good use making “Superconductivity: The Musical!”, an 11-minute music video that explains how lone electrons can bond when cooled and what happens when impurities enter the picture. The video recently won best overall in Science magazine’s annual Dance Your PhD competition.

The competition challenges doctoral students to represent their research as a dance and share it via YouTube. Mr. Yapa, who based his video on his master’s research at the University of Victoria, spoke with University Affairs shortly after his win was announced in February.

University Affairs: How does it feel to have won $1,000 and “immortal geek fame?”

Mr. Yapa: It’s been a little surreal. I’ve been thinking about entering that competition for a long while so, actually, it’s funny that I won. It was very hard for my brain to comprehend what was happening.

UA: Your win has been featured in outlets like Science magazine, CNN and CBC. What’s that like?

Mr. Yapa: I’ve been doing two or three interviews every day and I’ve been reading all the comments that people have posted online. It’s just mind-boggling to me that so many people have seen this.

UA: How did you come up with the idea for your Dance Your PhD entry?

Mr. Yapa: I think my first idea came to me two years before I even made the video. I was riding the bus through the university and lyrics about my research came into my head, and I wrote it down as a note.

But I just kept thinking about these electrons as people for a long time. And I’ve been swing dancing for about five years now, so thinking about lone things coming together and forming a pair that move through a metal – it seemed very natural to me to represent [lone] electrons as dancers.

So, this (video) is a marriage of all of my hobbies in my life coming together – even my high school metal days made a little bit of an appearance in the video. This is an amalgamation of everything that I’ve done in my life to this point.

UA: Did you do all the work by yourself or did you have someone help you?

Mr. Yapa: I wrote and recorded all the music myself. The choreography, I had help with from two friends in Victoria who’re part of the swing dancing scene, and one of them is also a graduate [of the University of Victoria] and a PhD student. So for the choreography all three of us worked together; I showed them my music and what I wanted to translate, and we worked on the choreography together. And the postdoc in my research group back at UVic, well I kind of roped into doing all the videography.

I worked together in collaboration with about 20 other people in the swing dancing community, and it was a massive group effort.

UA: Did you spend any money on your video?

Mr. Yapa: The costs were minimal because it was very DIY, using whatever we already had. I’d say at most $200. I think the biggest cost was renting lights for the day.

UA: Considering all the work that went into it, why did you decide to enter the competition?

Mr. Yapa: Dance Your PhD is something I saw a long time ago, even before I started grad school, and I was blown away by how people were doing it. The idea of doing a video became much more real as I started my master’s.

The University of Victoria has a research festival every year called Ideafest, where they showcase research by graduate students and faculty. Last year, they had the event called Express Your Thesis, which is directly inspired by Dance Your PhD. I immediately knew this would be the perfect opportunity to make the video for local competition in Victoria, but then also submit it to the bigger Science competition.

UA: You said that you had heard of the Dance Your PhD competition years ago. Do you have a favourite entry from this year or past years, aside from your own?

Mr. Yapa: The one that I think inspired me the most was the winner from 2017. The winner was a mathematician from California, and she represented her research into braid groups using aerial silks and some other forms of dancing, like acroyoga.

That was one of the best produced videos I’ve seen in this competition and it definitely showed me that there is very little that can’t be translated into dance. I knew if somebody – a mathematician, which is arguably a more purer science than even physics – could do that using math, then I could do that for my research in physics.

UA: What advice would you give to others entering Dance Your PhD or a similar competition?

Mr. Yapa: I didn’t go out and hire some big production company or audiovisual people, I just asked people in my friend group and used their hobbies to execute this idea. People, students especially, have so many amazing hobbies that they do in their spare time, and they’re just looking to help out on big projects like this.

UA: Did the judges tell you why your video won over others?

Mr. Yapa: They mentioned that what tipped my video over the edge to win was the fact that I also wrote the music and wrote the lyrics and used that in harmony with the dance – everything was tied together. A lot of the other dancers just used non-copyrighted music; they had to search for something that would fit, and sometimes it wouldn’t go hand-in-hand with what they wanted to convey.

Because I wrote all my music myself, I knew exactly what type of feeling I wanted to put into it, what kind of energy, and everything kind of goes together in the video.

UA: What’s next for you?

Mr. Yapa: I just started my PhD (on the physics of superfluids) in the fall so finishing that up, of course, is my biggest priority right now. But I am already thinking about how I can use my current research and express that creatively. Maybe I will reach out to the Edmonton arts community and do something with my research.

It will definitely involve a lot of music to popularize science, but it probably won’t look a lot like the Dance Your PhD video.

PUBLISHED BY
Meaghan Haldenby
Missing author information
SEE SIMILAR STORIES
COMMENTS
University Affairs moderates all comments according to the following guidelines. If approved, comments generally appear within one business day. We may republish particularly insightful remarks in our print edition or elsewhere.