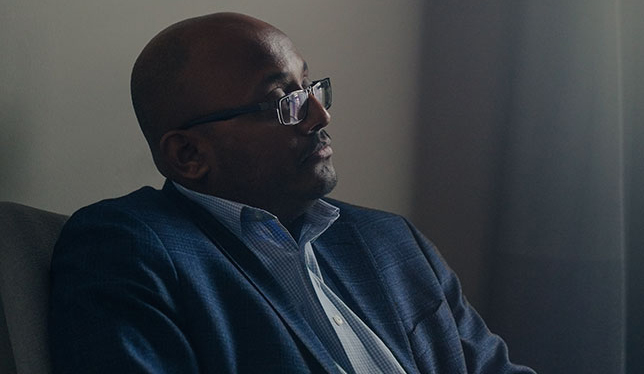 Dr. Amarasingam of Queen’s University is currently interviewing foreign fighters returning home about how they can leave their “ideological baggage” behind. Photo by Ian Patterson.

As an academic who specializes in terrorism, radicalization and diaspora politics, Amarnath Amarasingam says the camps and prisons in northeastern Syria, where thousands of captured Islamic State foreign fighters and their families are living under Kurdish control, are fertile ground for the research needed to understand the rise and fall of the caliphate.

But he also worries about the fate of those same people following the recent Turkish invasion of the region.

“Winter is coming in Syria,” says Dr. Amarasingam, who visited the region in 2018 and again last year in early October, just days before the Turks launched a military offensive aimed at creating a so-called “safe zone” along the Syria-Turkey border. The week-long conflict resulted in 100 deaths and displaced more than 300,000 people. Among them were 11,000 foreign fighters from the defeated Islamic State of Iraq and Syria, or ISIS, and 80,000 of their family members (including over 40 Canadians – five men, 15 women and 25 children under 12) who were resettled in makeshift facilities deep inside Syria.

Dr. Amarasingam is no stranger to humanitarian crisis caused by war. A Tamil born in Jaffna, Sri Lanka in 1982, he fled with his family to Canada in 1988 to escape the fighting between the Tamil Tigers and the Indian army. “I remember staying in bunkers when the shelling was happening, eating stale cookies, my parents taking us from village to village – it was very confusing and scary,” recalled Dr. Amarasingam.

His family eventually settled in Scarborough, and Dr. Amarasingam pursued two degrees at the University of Toronto, before earning a PhD in religious studies at Wilfrid Laurier University and the University of Waterloo. For his dissertation on social activism, organizational dynamics and youth identity in the Tamil community in Canada, he conducted dozens of interviews with former Tamil Tiger fighters, honing a research technique that has become a pillar of his academic work.

Then a series of events – the Arab Spring in 2010, the start of the civil war in Syria in 2011, and the rise of ISIS’s so-called caliphate in 2014 – led many young Muslims in Western countries to leave home and join various militant and jihadist groups in Syria and Iraq, which created a subsequent need for academics with skill sets like his.

“A lot of people who travelled to Syria to join these groups maintained their social media profile and continued to tweet and post on social media,” said Dr. Amarasingam.

“You could actually reach out to talk to them and get some primary interview data about what they were doing and pose questions to the people who were fighting on the front lines.”

Those interviews, he added, have helped researchers learn about the inner workings of the caliphate, which was finally defeated in early 2019, and to understand the dynamics and motivations of the foreign fighters who joined it.

“Why would a 20-year-old white convert from Calgary, or a 25-year-old refugee from Toronto feel the need to go fight in Syria? We never saw large numbers like that before with groups like al Qaida,” said Dr. Amarasingam. The answer, he says, is likely a mix of the personal and collective search for identity that many young people feel, and the fairy-tale allure of a purely Islamic state.

“ISIS was kind of pitching, ‘You can come here and live in this utopian society where we’re establishing Islamic law as they saw it; you can have a family here; you can fight for this kind of kingdom of God on Earth; you can be part of this historical project,” says Dr. Amarasingam. “I think that had a galvanizing effect on some of these young people, and it was very successful.” Roughly 100 Canadians are believed to have fought for the Islamic State (compared to some 1,500 from European countries and thousands from Middle Eastern countries).

Now an assistant professor in the school of religion at Queen’s University, Dr. Amarasingam has shifted his attention to interviewing ISIS fighters who have returned to Canada, as well as ISIS prisoners and their families in Syria and Iraq.

“I’m trying to talk to them about what life was like in the caliphate, their experiences with reintegration, the legal and psychological challenges they face, and how they leave that ideological baggage behind,” said Dr. Amarasingam. “These questions are now front and centre in many Western countries.”